Film Review: Netflix’s How It Ends Neglects the Key Ideas of Its End-Times Tale 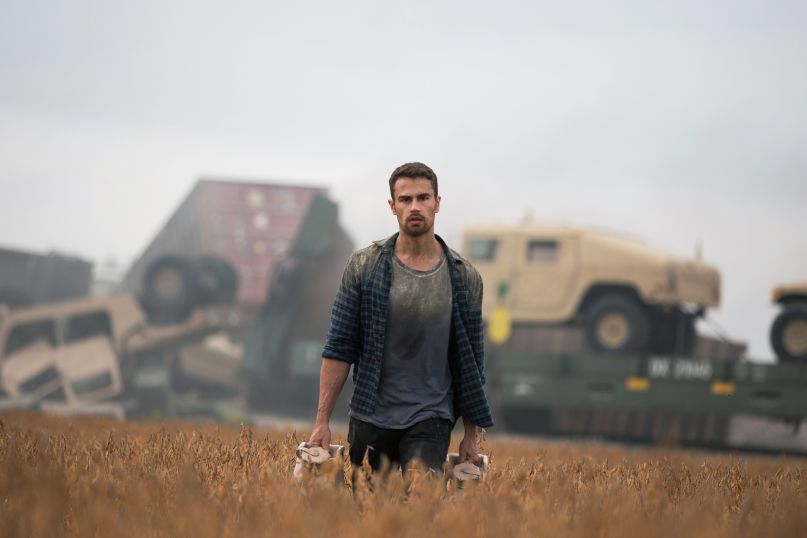 How It Ends is most interesting when you consider the implications of its title, which refers to much more than the apocalyptic event that serves as the movie’s inciting incident. What truths, fictions, loves, and behaviors evaporate in the face of chaos? Unfortunately, Netflix’s latest original film is a bit too reserved to fully commit to the most complicated of these ideas – namely, the ways in which one’s devotion can cause them to commit acts that fundamentally change them – despite introducing them early. It’s enough to make one wonder how much Brooks McLaren‘s script has changed since it first landed on the Black List in 2010.

The story follows Will (Theo James) and Samantha (Kat Graham), a couple with a baby on the way. He’s in Chicago and she’s in Seattle when things go to hell; the nature of the catastrophe is murky, but it results in a nationwide blackout and the ominous sight of F-22s flying over major cities. Desperate to get back to Samantha, Will hits the road with her father, Tom (Forest Whitaker), an ex-Marine with little love for his daughter’s boyfriend. Together the two scramble for gasoline, run afoul of thieves, and meet a companion in Ricki (Grace Dove), a young mechanic. She’s one of the few souls they stumble upon who isn’t, in some fashion, their adversary, and the rinse-and-repeat nature of Will and Tom’s disastrous encounters gets repetitive after a while.

Still, director David M. Rosenthal handles several of the film’s action setpieces with aplomb, ratcheting up the tension and delivering catharsis in some satisfyingly brutal car crashes. He also has an eye for landscapes, working in wide, encompassing shots that establish a grand, foreboding vision of the Midwest that’s suitably doomstruck. Unfortunately, the moments of relative calm tend to dissolve the momentum, as neither the script nor the performers can make the film’s central relationships sing.

That’s too bad, because they’re clearly supposed to serve as the backbone of the story. The cross-country trip ostensibly doubles as a bonding session for Will and Tom, but their budding connection never quite transcends a sense of grudging respect, which results in a few tender moments from Whitaker but little in the way of pathos. Ricki, meanwhile, disappears once her story actually begins to crystallize. Will is a bit of a cipher, with James playing the look of the character but not the heart. It doesn’t help that the film is packed with moments that strain credulity, whether it be with the relative ease Tom is able to bypass a military roadblock or in Will’s stuntman chops behind the wheel. It’s always just a bit too easy to see the writer’s hand at work, which serves to undercut immersion and identification.

But there’s a restraint at work here, with Rosenthal and McLaren allowing the details of this apocalyptic event to drip out slowly, often from unreliable sources. Voices on the radio scream about North Korea and China, while others accuse the president of some kind of “cover-up.” When a bug-eyed Jeremiah (Mark O’Brien) emerges in the third act, he articulates these myriad strains of news in cryptic fashion, offering plenty of hints about the event without stripping away its mystery. Best of all, we’re never treated to one singular version of the truth. As in 1996’s The Trigger Effect and the original Cloverfield, the specific cause of the event is eclipsed by the chaos of trying to navigate it. This allows for a greater sense of disorientation, as well as a truer depiction of what such a situation might be like for those swept up in it.

The problem, however, is that none of this complexity seems to resonate with Will, who remains too laser-focused on rescuing Sam to ever consider these larger implications. That might be satisfying in a superficial sense, but by refusing to directly engage with its ambiguity, the film’s pat ending feels both puzzling and abrupt. It also muddles Will’s arc, which should be far more dynamic. We see the changes in his behavior, but not in his attitude or emotional maturity. As such, How It Ends ends with something of a whimper, leaving us feeling as if a compelling story was undercut by being told through its least interesting characters.