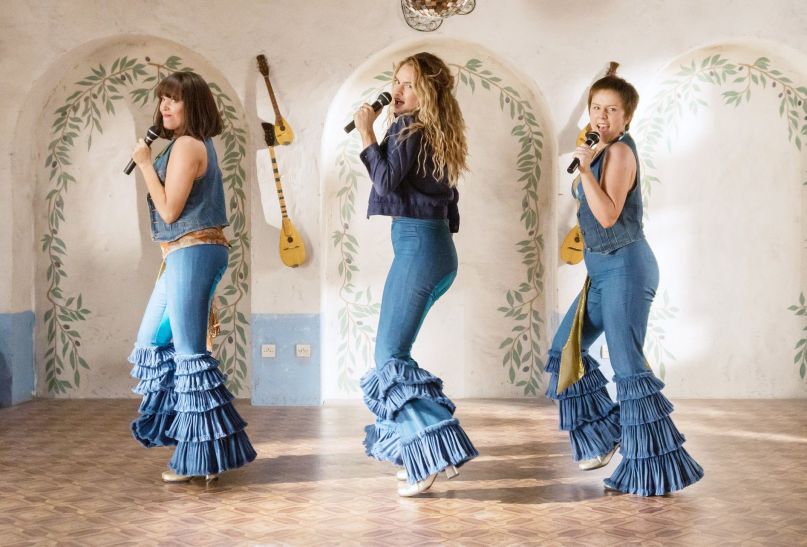 Normally, this is the part of a review (the introduction, namely) that would contain some sort of appealing lede, a rumination on a scene or theme intended to draw in the reader and set up what’s to come in the following text. There might be mention of a young woman racing through an orange grove, a physical expression of joy that mirrors the appeal of the film in which that young woman exists; perhaps there are hints of a melancholic throughline that makes that joy all the sweeter.

In this particular case, perhaps the most honest response to this film is to do what it does: Dispense with the niceties, abandon fealty to logic, and get right to what the people want. So here goes. Mamma Mia! Here We Go Again is one of the most batshit crazy pieces of outright nonsense this writer has ever had the pleasure of encountering, and while calling it an excellent film would be going way too far, I enjoyed every single goddamn second of it.

Ostensibly a sequel-meets-prequel to Phyllida Lloyd and Catherine Johnson’s 2008 adaptation of the Broadway musical Mamma Mia!, writer-director Ol Parker’s Here We Go Again makes not one lick of sense. It leapfrogs back and forth in time, following Sophie (Amanda Seyfried) as she feverishly prepares for the grand re-opening of her mother Donna’s (Meryl Streep) hotel, and young Donna (the delightful Lily James) as she discovers the island on which that hotel stands, and meets the three young men (Jeremy Irvine, Josh Dylan, Hugh Skinner) who would later become Sophie’s “three dads” (Pierce Brosnan, Colin Firth, Stellan Skarsgård). Young Donna’s adventures and Sophie’s struggles are encouraged and eased by the friendship of Tanya and Rosie (Jessica Keenan Wynn and Alexa Davies in the… well, let’s just call it the past, and Christine Baranski and Julie Walters in what may or may not be the present), the women who put the Dynamos in Donna and the Dynamos. And that’s the movie. Sort of.

What you’re about to read will appear to be a complaint, but it’s honestly not: this is a film that plays like a Mad Lib written in reverse, where the places you’d normally see blanks are all ABBA songs, and Parker’s task was seemingly to connect those songs with a story. He does, often ignoring plot points from the first film in favor of doing whatever seems most fun, or suits the song best, or something that maybe just occurred to him in the moment. “Waterloo”? Set it in a French restaurant with some vaguely military decor. “When I Kissed the Teacher”? Uh, school graduation! That works. “Fernando”? Cast Andy Garcia, he could be a Fernando. Cher wants in? Let’s throw out all the backstory about Donna’s mother and start from scratch. No one will care, right? And, reader, here is the most remarkable thing about this movie: the answer to that last question is “correct, no one does.”

Part of what makes all the lackadaisical plotting and the devil-may-care attitude toward its predecessor acceptable, and even a strength of Here We Go Again, is that there’s a keen sense of the surreal running through Parker’s film. Michele Clapton’s vibrant, playful costumes seem pulled from a half-dozen decades, yet the characters have had the same haircuts since their teens. It’s tempting to say that neither the togs nor the hairstyles have anything to do with the era in which they exist, but it’s frankly hard to tell what era that might be, if any. There’s a band that seems to exist in both timelines, with the same beaded vests and the same members, none of whom have aged a day. When the action leaves the hotel, only the presence of one of the main characters anchors you in the timeline, such as it is; the world seems otherwise untouched by time, and the weather forecasts are near-perfect parallels to one other. It’s all filmed in the same sunny, wind-kissed style, far from realistic but undeniably appealing, and the disorienting leaps in time are made more so by editing crosscuts ostensibly designed to pull you seamlessly from one storyline to the other.

Put it this way: it is possible to leave Mamma Mia! Here We Go Again believing that all the characters exist in the same pocket dimension; that they’re in a Lost-style purgatory in which they confront the ghosts of their past in the cheeriest possible fashion before being reunited with lost loves as a reward; that time is a flat circle and they all died at the end of the first movie; that the extras are supposed to be Greek gods and that the leads are all actually ghosts. Two parallel storms arrive, and they seem to be both the workings of fate writ in lightning and plain-old storms designed to move the plot forward. There’s a mystical horse in a basement and a 14-hour meeting in Tokyo, a secret twin and a customs guy whose opinions about hair shape the forces of destiny. Then Cher shows up. It is bonkers. It is either accidentally or purposefully brilliant, but whatever the case, it’s also a mess.

It’s also delightful. Much of that is due to the performances of its cast, made up of singers and non-singers who (regardless of skill level) attack both the music and the ridiculous storyline with affection and gusto. As with the first film, Seyfried’s exuberance goes a long way toward getting even the most hesitant viewers on board; she’s matched in this by James, who captures with ease the wild, open-hearted spirit which Meryl Streep gave Donna in the first film. Baranski and Walters once again lend the film some of its biggest laughs and much of its heart, treating the relationships with plenty of emotional weight while approaching the film as the gauzy, sequined lark it is.

Brosnan, Firth, and Skarsgård are appealingly game and undeniably charming. In particular, Brosnan’s wandering accent and, ahem, less than stellar singing voice remain oddly enchanting — he’s giving it his all, bless him. Irvine, Dylan, and Skinner can’t help but pale a bit in comparison, though Irvine’s valiant attempt to replicate Brosnan’s accent is one of the film’s sole, and most compelling, nods toward realism or anything resembling a through-line. Cher and Streep arrive at the last moment to do exactly what they do best, and the film treats them like the treasures they are. Like every other member of the ensemble, they seem just happy to be there, and it’s easy to see why.

Now we arrive at the music, which is part of the aforementioned why, and also the film’s raison d’etre. Parker’s approach seems to have been to plant a song in the film whenever the impulse struck. It doesn’t matter if the lyrics apply. It doesn’t matter if the song had been used previously. If it reflects the emotional truth of the scene, it goes in, and that’s that. The result is like watching a friend’s ABBA-only mixtape come to life, where there’s an arc and a story, albeit one only truly known to the author. James and Seyfried have lovely voices, as does Baranski, and Cher is Cher, bitch, but even the most lackluster singers among the cast belt these tunes out with such obvious enthusiasm that one could be forgiven for wanting to sing along.

At the end of the day, that’s probably what Mamma Mia! Here We Go Again was going for all along. The intricacies of plot mean little, and inconvenient bits of backstory matter even less. The point is the party; the point is to celebrate, even when grief or heartache gains a foothold in life. It’s obvious and too easy a thing to say, but it feels right, so let’s make like Mamma Mia and go there anyway: oh oh, how can anyone resist it?