"This is exactly as weird as I thought it would be," remarked the singer 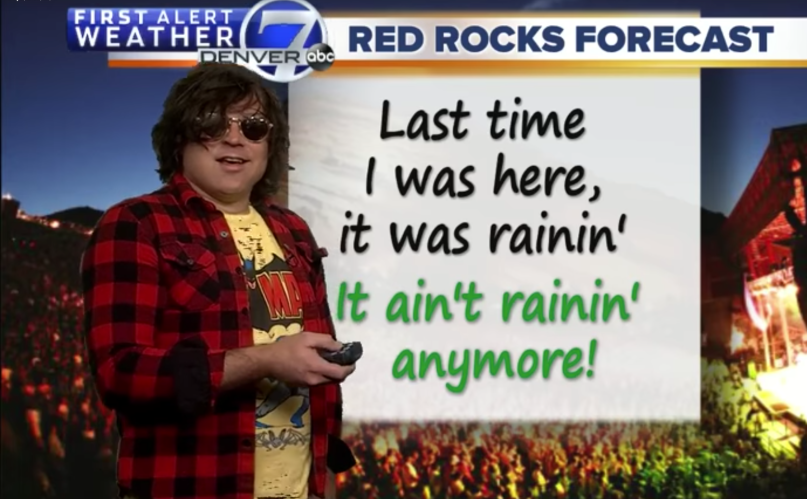 In the run up to his performance tonight at the iconic Red Rocks Amphitheater, Ryan Adams undertook a playful promotional tour. That included penning a song for local radio station 105.5 The Colorado Sound, as well as another track for news channel Denver 7. The latter, entitled “Denver7 (Piece of Heaven)”, was written in exchange for a chance to do the live weather forecast, which Adams actually got to do on Wednesday evening.

As promised in the song, the singer-songwriter wore his Batman shirt and flannel during the broadcast. “This is unreal,” Adams remarked. “I was sitting there, three cats, hanging out at my house. Next thing you know, I’m on the news. Unbelievable!” He went on to say that the movie Twister inspired his desire to test his hand at meteorology, though he clearly could have used a little more seasoning before taking to the air. Endearingly awkward, Adams stumbled through the forecast with lines like, “Sunrise is at 5:30 am, so get home early,” and, “South 15 to 30 mile-an-hour winds… That’s crazy. That’s a lot of wind.”

Adams was also completely amazed at the power of green screen technology, as when Chief Meteorologist Mike Nelson told him to sing the lyrics to his own “Dirty Rain” as they appeared on the screen. “Sing where?” Adams asked, his back towards the camera. “If you look at the screen while you’re in the weather, you guys, it’s so weird. This is exactly as weird as I thought it would be. Whoa.”

Watch the whole thing below.