"Respect to @olivegarden for no longer selling AR-15s at all their locations," tweeted the shit-posting parody account 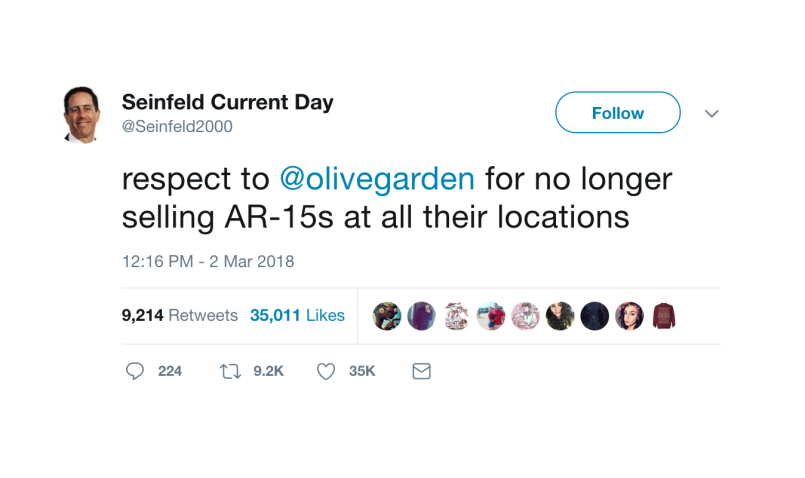 A number of major retailers are making a stand in the wake of February 14th’s mass shooting in Parkland, Florida, with Dick’s Sporting Goods deciding to no longer carry assault-style rifles in its stores and Walmart refusing to sell guns and ammunition to anyone under the age of 21. Obviously, this has led anti-gun advocates to call on other retailers to stop selling guns and shitposters like the delightfully bizarro @Seinfeld2000 to do what they do best.

“Respect to @olivegarden for no longer selling AR-15s at all their locations,” @Seinfeld2000 tweeted out yesterday, a statement that, if you’re unaware, is funny because a family eatery such as Olive Garden sells wet pasta, not assault weapons.

Olive Garden didn’t see the humor, however. In a cease and desist letter sent by a law firm representing the chain, Olive Garden accuses the Twitter account of “spreading false, destructive, and defamatory rumors about it.” Disregarding the clear satirical component of the tweet, one wonders what’s so defamatory about a “family friendly restaurant that is safe for all patrons to dine in” choosing to, at least in the fictional world of this tweet, no longer sell AR-15s.

That somebody at a juggernaut chain such as Olive Garden felt the need to pursue legal action against a shitposting Twitter account for making a joke that’s not even negative towards its brand serves as a further testament to the stupidity of these times.

Update: Per Olive Garden’s Twitter account, the company says the cease and desist didn’t come from them.

Thank you for bringing this to our attention. We’ve looked into this and can confirm that our legal team has not been in contact with this individual nor did we send them the message that was posted.