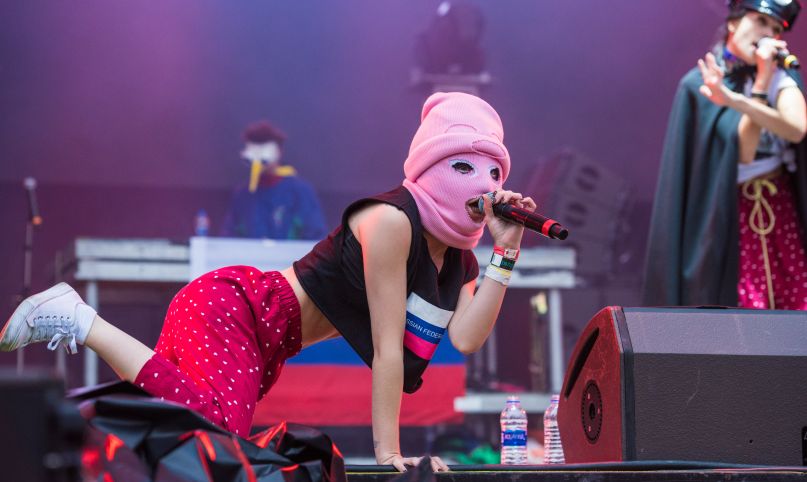 Two members of feminist punk collective Pussy Riot have gone missing in Crimea, according to a tweet from the band.

Olya Borisova and Sasha Sofeev, along with a third member, Maria Alyokhina, were detained after entering Russian-annexted Crimea on Sunday, according to a report from Radio Free Europe. Alyokihna was eventually released, but the whereabouts of Borisova and Sofeev are unknown. In their tweet, Pussy Riot accused Russian police of breaking their phones and computers, adding, “We can not reach out to them. We don’t know what has happened to them.”

Update: According to a follow-up tweet from Pussy Riot, Borisova and Sofeev have been found and are safe. A representative for Pussy Riot confirmed the news to Consequence of Sound.

FSB detained them several times. Yesterday cops broke their phones and computers. We can not reach out to them.

We don't know what has happened to them. pic.twitter.com/6pRtgCIbi3

Pussy Riot first rose to prominence in 2011 when three members of the balaclava-clad collective, including Alyokihna and Nadya Tolokonnikova, were arrested following a protest performance at Moscow’s Cathedral of Christ the Savior. They were convicted of “hooliganism motivated by religious hatred” and spent nearly two years in prison. Since their release, Pussy Riot have remained vocal critics of Russian president Vladimir Putin and his oppressive, clandestine tactics. They’ve also sought to improve Russian prison conditions and raise awareness for “prisoners of conscience”, those jailed for their race, sexual orientation, religion, or political views.

Tolokonnikova and several other members of Pussy Riot are currently in the US gearing up for their first-ever headlining tour.