Film Review: The 15:17 to Paris Re-Enacts a Terrifying Incident in Uninspired Fashion 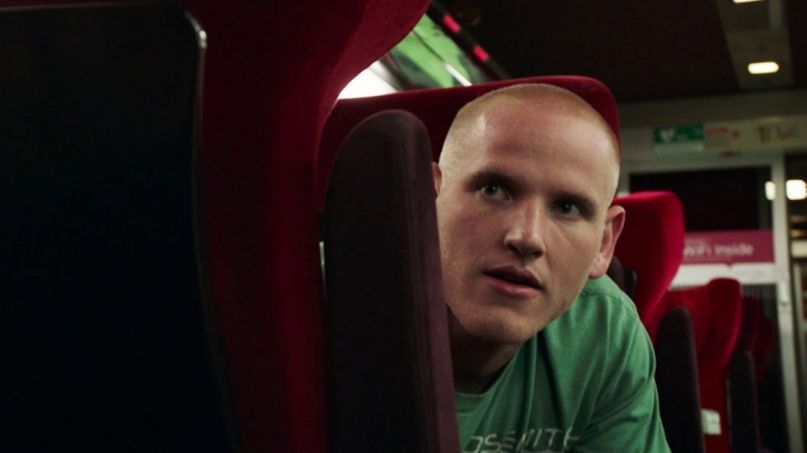 To Clint Eastwood’s credit, he has the right ideas here – but The 15:17 to Paris feels like the wrong movie for this story. Perhaps it’s the haphazard execution, or the slack pacing, or the fish-eyed thematic sidetracking, the iron-handed writing, distracting sitcom star casting, and alas, the weight of the film’s real-life leads just…not feeling quite right. (We promise this review will be fair to non-actors, and Eastwood’s use of them is pure enough, but perhaps hampered by the director’s famous one-take methods.) An ostensible true-heroism disaster flick, the core incident is over within a second, and the long road to the how, why, and when of the incident is bland. The parts never ignite, and The 15:17 to Paris comes across as a bit of a dud overall.

But it could be a lot worse. This isn’t total jingoism, or worse, nihilism. A favorite example is Larry Peerce’s Two-Minute Warning. It set the model for terrible disaster epics, one of characterization for the sole purpose of cruel elimination. The venue there was the Los Angeles Coliseum in 1976, as nearly everybody onscreen is shot by a sniper come the end. You know the clichés; ominous music, mean-spirited directors treating stars like a gallery for killers, bad weather, diseases, or whatever.

Eastwood is more interested in the complete (and reasonably plain) lives of Anthony Sadler, Alek Skarlatos, and Spencer Stone, and what divine force brought them together to take down a would-be terrorist on August 21, 2015. As the story goes: a 25-year old Moroccan man, Ayoub El Khazzani, took hold of a Thalys train heading to Paris with an assault rifle. His motives were extremism and terror. But in an instant, several Thalys passengers managed to subdue Khazzani with blunt force. It was a multinational moment of good Samaritan heroism, where people around the world came together to subdue a madman. Mark Moogalian, a 51-year Frenchman with U.S. citizenship, appears as himself, unnervingly re-enacting his own shooting in the neck. Christopher Norman, a British businessman who helped, also appears as himself. Moogalian and Norman barely speak, and are only loosely introduced.

On to the film’s preferred course of action: Sadler, Skarlatos, and Stone. The American trio from California are given soggy life stories, ones that feel slightly tin-eared, and mawkishly similar to recent faith-based films. Eastwood and writer Dorothy Blyskal (working from a book by the American trio and author Jeffrey E. Stern) start the film by teasing the train ride, but dig right into Alek, Anthony, and Spencer.

Framed in a Chevy convertible, Anthony tries to pal up to the viewer by offering one of those stock journal entries about how the other two are his boys, and they’ve been through some crazy times, and so on. Perhaps something should be said for Eastwood’s retro malt-shake worldview of these boys: they’re not all that crazy, and it mostly fits with the film’s themes. They’re knuckleheads with airsoft guns. Camo-sporting boys fascinated by war strategy. They have single mothers, and are sent to the principal’s office aplenty. Boys being boys in parochial school, in so many words.

And the religious lean, well. Nothing’s wrong with faith, but the film’s dialogue trades in absolutes and defensiveness. Within the first five minutes, Jenna Fischer of The Office is defending her refusal to medicate her son, Alek, for ADHD, because her god has a higher plan. It’s one of a handful of instances where God is suggested, but not very eloquently. Spencer Stone, as an adult, contemplating a higher power reads like tipsy wondering. Eastwood’s dabbled in the cloth before – the preacher in Pale Rider, the meditative decision-making of Gran Torino and Million Dollar Baby. But he’s never been this black and white, siding with people declaring “my god.” It’s a strangely executed new phase for the director.

Back to the boys. Their youth is captured precociously, to the point of inducing disinterest. Eastwood, a filmmaker known for being done with scenes after minimal takes, could have been spared some trouble had he asked for more options (especially with over-confident child actors). Wait for Spencer to tear up a poster, defiantly, before a hall monitor in what could only be described as a moment of accidental comic genius. He sweats. He stands off with an older man. One bad 12-year old, with a Letters from Iwo Jima poster in his room. Young Spencer is the boy your mom doesn’t want you to be friends with. It’s just silly. “Now can you tone it down?” is something one imagines nobody said on set.

But the drama improves a bit once adolescence is left behind. The trio grow into movie archetypes: a joker (Sadler), a screw-up (Stone), and a straight-shooter (Skarlatos). Sadler attends college, and Skarlatos was on break from the National Guard in Afghanistan before the trio met. While Eastwood dips into teasing the events of the attack, he mines a lot of backstory out of Stone: his troubles in school, demotions in the Air Force, his desire to be a jumper until eye troubles get in the way. Stone’s even seen working at a Jamba Juice. He certainly has the richest arc – and comes across like an amiable, easy-going guy – but, well, let’s get to the non-actor issue at hand.

The trio reads their lines briskly, peppering dialogue with “yeah, man”s and “no, man”s as if attempting to naturalize the words. They’re friends in real life, and yet placed onscreen, it feels like they’ve rarely talked to each other. Perhaps it’s the nerves of doing a project like this, being asked to re-enact what was likely the hardest day of their lives. The casting approach feels far more earnest than casting WB pretty boys or something of the like, and the parting feeling is certainly one of respect. But a sense of understanding about their actions, or a deeper sense of purpose in their lives? Well, it’s just not there. They acted bravely, quickly, and were left no time to reflect, and neither is the audience. Did God send them to that train? Karma? Did basic training help them save the day? Maybe it’s a little of all of that, but the film just comes across as aimless. It’s a sticky mess of themes that never comes together.

Admittedly, the most curious leg of the film is the one that sees the trio backpacking across Europe. Eastwood seems to suggest that exposure to new things, and history like The Roman Coliseum, is what can drive and inspire us. Reading that aloud, it’s hard not to second-guess the message, because it’s handled so sloppily. See Rome’s waters, wines, and discotheques today – save the day tomorrow. Maybe Eastwood just wanted a trip out of the country before he’s 90.

The 15:17 to Paris is too unfocused, too hard to take seriously, and too short to really get invested in it. It’s an Eastwood misfire.