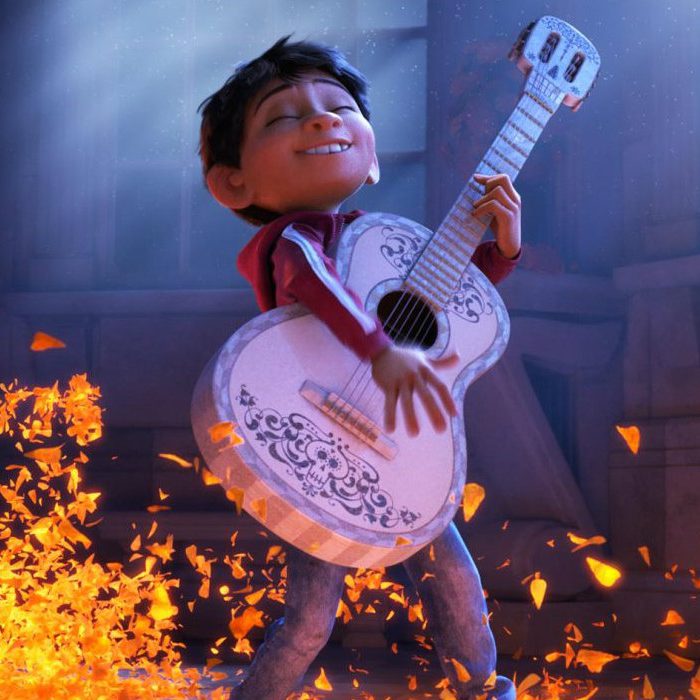 One of the best moments in The Avengers — yes, this is a review of Coco, just go with it — is a single line of dialogue, followed by a pretty solid visual effect. Bruce Banner’s walking toward an oncoming threat, in this case an alien fish monster that’s maybe also a spaceship or something, and it looks like he’s going to get absolutely creamed. Captain America calls out to him, and as Banner turns around, he says, “Now might be a really good time for you to get angry.” A slight grimace crosses Banner’s face, something almost like grim satisfaction, and drops this gem: “That’s my secret, Cap. I’m always angry.” And just like that, he’s the Hulk. Green. Huge. Undeniably angry. Which, of course, he always is.

In writing about Coco, you have to start by acknowledging that this is a surprisingly dark film. It’s playful and transporting, an absolute riot of color and sound fueled by love and passion — love of music, love of family, love of tradition, romantic love, love of self, even the love of a good dog — but all the same, this is also a story about death, cruelty, and missed opportunities. It feels, on first reflection, like a departure for the delightful machine that brought you Toy Story and Monsters, Inc. But here’s Pixar’s secret, Cap. They’re always dark.

The adorable skeletons, and there’s no better word than adorable, that populate Coco’s Land of the Dead have a bit in common with the monsters of Monsters, Inc. They’re purposefully cute, and yet you can see the grain of their bones and the weight of life and afterlife upon them, making them simultaneously endearing and sad, and even a bit creepy. The skeletons find their way into the story when young Miguel (Anthony Gonzalez) winds up on the other side, alive and yet unseen by the living. To reveal too much of the story is to rob you of the chance to be swept up in it, but suffice it to say that Miguel is a musician in a family that hates music, based on a generations-old betrayal, and he spends most of his trip to the afterlife seeking the blessing of Ernesto de la Cruz (Benjamin Bratt), the greatest musician in Mexican history. He’s aided in this quest by the down-on-his-luck Hector (Gael García Bernal), a guy — er, skeleton — just trying to get back to the Land of the Living on the Day of the Dead. Hijinks ensue, and so do betrayal, musical numbers, intrigue, the revelation of long-buried secrets, and some fun with a dog.

It’s delightful stuff, made no less delightful by the darkness, most of which is handled so frankly that one simply grows accustomed to it. People die all the time, sometimes peacefully and sometimes not. Trauma lingers, and it can be passed down from generation to generation. That’s just life, and life is also beautiful. Coco’s darkness is compelling, but the light is every bit as engrossing, and it’s there in spades. Directors Lee Unkrich and Adrian Molina, who are also credited on the story and screenplay (respectively), make both worlds almost hypnotic in their beauty, both visually and sonically. Near the top of the film, Miguel runs from his home to a secret place all his own, and even that simple route is awash in color, texture, and personality: hard stone, cool water, rough wood covered in thick paint, a television rescued from a rubbish pile, a dog that’s floppy in that perfect way all dogs are. It’s hard to imagine it could be topped, but is it ever.

Best of all, in this sequence and others, is the sound. We hear the world as Miguel does, and so everything is music, even the rattling of dishes or the squeaking of a wheel. There’s a sizable sound team for Coco, and it’s obvious that a great deal of care was put into creating the sonic tapestry on which this story is threaded. It’s beautiful whether raucous or still, and if the sound of the world is beautiful, it’s nothing compared to the music.

When “Remember Me” wins an Oscar, it’ll be well-deserved. It’s the most integral a song has ever been to a Pixar film. The music from all three Toy Story films is rightly heralded, but not one of those lovely performances holds a candle to this one in terms of narrative and thematic resonance, which grows and shifts with the story. It would be a future classic even without that resonance, however — writers Kristen Anderson-Lopez and Robert Lopez, Oscar-winners for Frozen, know their way around a melody, and this one sweeps gently in like a breeze through a bedroom window, or a memory that’s fading but still lovely and warm. It’s only one of several great songs in Coco, though “Remember Me” is definitely the one you’ll, yes, remember.

You’ll remember the film, too. There are some hiccups here and there — outside that one gorgeous run of Miguel’s, the motion of the story takes a while to get rolling, and there are moments where that aforementioned darkness is handled in an oddly casual manner — but with some distance from the film, nearly all of those flaws will fade. What lingers is the beauty, the warmth and affection, the touching candor with which the story approaches death, and the music. Coco balances these things on the head of a pin, leaving its audience with a playful story about mortality, a dark story about floppy dogs, a whimsical tale about kindly dead relatives and forbidding live ones. It’s imperfect and gorgeous, and even if it is a dark movie, it’s one I can’t wait to see again. Being confronted with one’s own mortality is a small price to pay for something this good.