Plus, the alternative rockers share 10 Things they love about Adult Swim 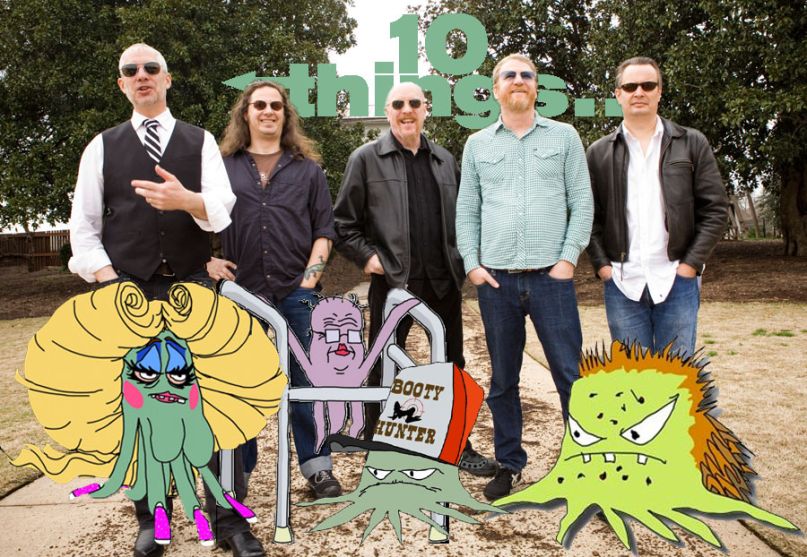 10 Things… is a recurring new music feature in which an artist goes H.A.M. on a particular topic.

Adult Swim’s fourth longest-running series, Squidbillies, kicked off its 11th season last month. As with seasons past, the show’s production staff has tapped a number of surprising and varied musicians to cover the show’s theme song for each new episode. So far this season, Ty Segall, Against Me!, Steve Earle, and Bob Mould have turned in renditions of the show’s country theme. With episode five, “Ballad of the Latrine Marine”, airing this Sunday, November 12th, it’s time to reveal the next act to tackle the tune: alternative stalwarts Camper Van Beethoven.

Speaking with Consequence of Sound about why they were so on board with recording the cover, the band says, “There’s nothing like coming back to the hotel at 3:00 AM after a show, finding your room after getting lost in labyrinths of psychedelically patterned rugs and endless fake-wood doors, struggling with the magnetic lock and finally getting in and dropping all your shit on the floor, clicking on the TV and hearing the clank-clank of the Adult Swim logo starting up.”

Take a listen to their version below.

It’s not just post-show unwinding that makes Camper Van Beethoven such fans of Adult Swim, however. In our latest 10 Things feature, the band runs down the things they loved most about the late-night programing block.

But also the fact Adult Swim had the good sense to stop making it:
Watching [Xavier] was kind of like like pulling your teeth out with a pair of pliers while high on meth. It made perfect sense at the time. But in retrospect you’re glad you finally stopped. — David Lowery

Dude!!! Rick and Morty, as much or more than anything else. It’s so incredibly wrong, but thankfully in a smart way. We in CVB really appreciate taking a joke just a little bit too far. — Jonathan Segel

Post-Concert Unwinding:
But you know, there’s nothing like coming back to the hotel at 3am after a show, finding your room after getting lost in labyrinths of psychedelically patterned rugs and endless fake-wood doors, struggling with the magnetic lock and finally getting in and dropping all your shit on the floor, clicking on the TV and hearing the clank-clank of the Adult Swim logo starting up.

When I first started watching, their stuff in general could make me feel like I was smoking weed even before weed became legal. Now that weed is more legal, it’s even more confusing, depending on the state. And even more confusing by the fact that I don’t smoke weed anymore. But I do watch Adult Swim. — Victor Krummenacher

TV Land:
Unfortunately I have never watched Adult Swim and couldn’t tell you anything about it even if I wanted to. Sorry to disappoint. I watch TV Land still. Mr. Ed is more fucked up than anything on Adult Swim. You know you could port to Adult Swim by simply re-dubbing Mr. Ed to say really dirty old man jokes. Kind of like Burgess Meredith at the end of grumpy old men. “Looks like Chucks taking the log to the beaver.” — Anonymous Guitar Player

Loiter Squad Merch:
Also the Loiter Squad “kitten po-po” backpack I found backstage at Outside Lands Festival. It has kept my spare cables and guitar tools together for the last several years.