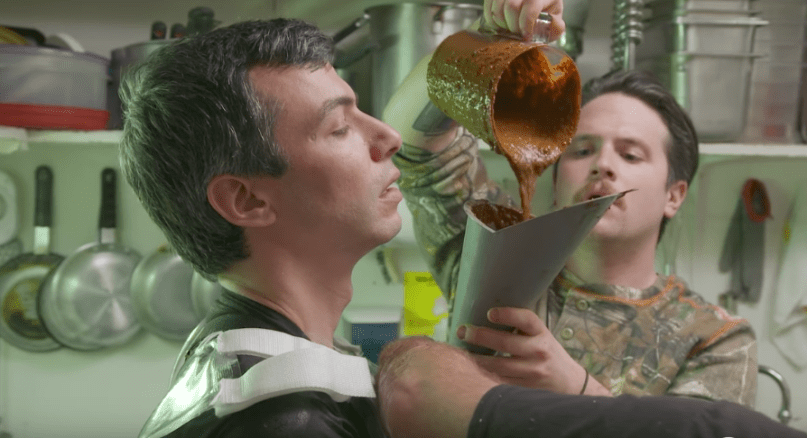 After two years off the air, Nathan For You will finally return to Comedy Central this September. As usual, the docu-reality show will find Nathan Fielder dishing out his prank-like advice to individuals across the country.

The network has shared a first trailer for the upcoming fourth season, and it reveals just what kind of altruistic endeavors Fielder will undertake this time. From the looks of it, he’ll try to rally taxi drivers to take down Uber once and for all, and will help a chili company attempt to sell their product in a sports stadium without giving the venue a cut. There’s particular focus on one individual, a Bill Gates impersonator who’s looking for a long-lost lover. Fielder puts his show’s resources towards helping this man find his Francis, but things appear to take a dark turn when it’s revealed she doesn’t know who he is and there’s something to do with… murder?! Take a look above.

Nathan For You season four debuts September 28th. A week prior on the 21st, an hour-long bonus special called Nathan For You: A Celebration will find Fielder reconnecting with past guests. The comedian will also be previewing the new season with a series of “sneak peek” shows in Vancouver, Seattle, and Portland earlier in the month.

Previous Story
Transcript reveals why potential jurors were dismissed from Shkreli case: “He kind of looks like a dick”
Next Story
The 10 Craziest Stories Revealed on VH1’s Behind the Music
Popular
More Stories
[fu-upload-form form_layout="media" title="Submit Your Photo"][input type="hidden" name="ugc" value="1"][/fu-upload-form]