Film Review: The Trip to Spain

Coogan, Brydon, and Michael Caine attempt to blow the bloody doors off Spain 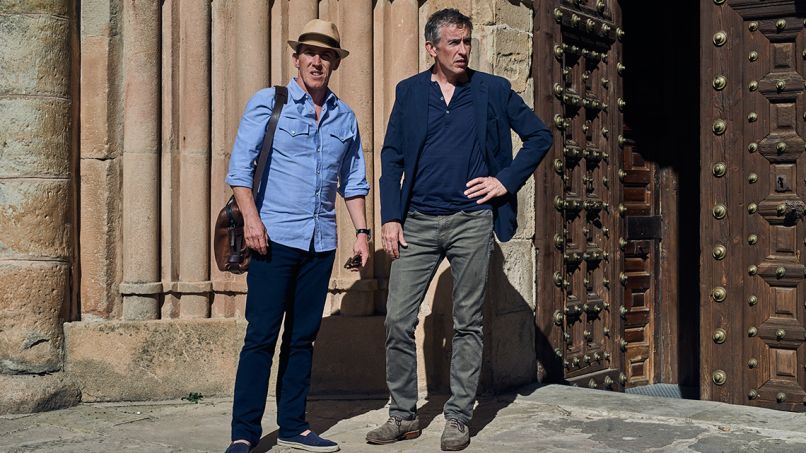 Road trips have always been the most reliable test of true friendship. Now, proctor that age-old exam in the suffocating confines of a charming dinner table or Range Rover to the king of the politely unsubtle put-down (Steve Coogan) and an impressionist who doesn’t know when to quit (Rob Brydon). Miraculously, that relationship survived the North of England and Lord Byron’s Italian stomping grounds, so filmmaker Michael Winterbottom dares test the formula a third time in The Trip to Spain. And the good news to report is that if you fancied or willfully endured the slow-paced, off-the-cuff nature of those first two television series later cut into films, then you’ll probably be glad you caught this ferry to the Iberian Peninsula.

Admirers of the franchise won’t stumble through more than the opening credits before finding familiar footing. The exaggerated versions of the real-life Coogan and Brydon — who, between them, barely know a kumquat from quat cum — are once again hired to write a series of fine-dining reviews. So, our smug Don Quixote (milling with wind) and diminutive Sancho Panza (in a box rather than on an ass) set out for adventure, but they won’t be traveling alone. Their egos and boyish barbs are fully in tow – the better to jockey for showbiz supremacy – as are Michael Caine (or at least Mick Jagger’s take on the actor) and a slew of spontaneously summoned old friends. It’s essentially the same menu of dinner-table theater and sightseeing shenanigans with intermissions of bustling kitchens and, in this case, gorgeous, sprawling Spanish vistas.

As always, The Trip films lean heavily on the improvisational chemistry between Coogan and Brydon, a mix of playful free-association, one-upmanship, and jabs at each other’s careers. Great bits include scallops poisoned by a double-agent chef, tentative Nazis, and a variety of takes on the Spanish Inquisition that range from Python to Brando in their influence. Brydon may get the better of Coogan this go-around, though. The two adulate over David Bowie, but Coogan concludes that he’s lost a bit of respect for the Thin White Duke when he finds out that he followed Brydon on Twitter. Later, as the bookish Coogan tries to explain to his assistant, Emma, and photographer, Yolanda, about the cultural contributions of the Moors to Spain, Brydon naturally assumes Coogan means the Moores, as in Roger, and continues to take credit in that familiar 007 voice and undermine Coogan’s lecture for several minutes.

“We’re in the sweet spot,” Coogan tells Brydon during their first meal, implying that 50ish is an age that has outlasted many of youth’s pitfalls while still leaving plenty of good years ahead. Of course, part of the beauty of Winterbottom’s original film is that we find Coogan so very far from the sweet spot. For all the laughs and the fact that “Michael Caine gets very emotional, indeed,” some of the most poignant moments capture Coogan out in a field or by a lake near nightfall, visually, emotionally, and quite literally disconnected as he tried to find reception to call his girlfriend, son, or agent to set things right. The Trip to Italy less effectively followed up on his path forward as a father and focused more on Brydon’s infidelities as a middle-aged man who felt ignored at home and sought comfort elsewhere. Though these films are primarily about the battle of wits between two talented comedians, Winterbottom has, in a sense, made them into a middle-aged version of Boyhood, regular checkups where the impressions and riffing are underpinned by the realities and dilemmas that face men of a certain age.

So, to find both Coogan and Brydon simultaneously in the “sweet spot” for the bulk of the movie – where shuffling agents and sussing out perceived slights from Hollywood are the ordeals they endure – does threaten to diminish the pathos that The Trip films subtly rely upon. Then Coogan receives two life-altering calls — a Skype call from his son, Joe, and a phone call from his married girlfriend, Mischa – that not only change his travel plans but ultimately evict him from that sweet spot, perhaps for good. Coogan’s at his finest as an actor when he carries a burden, and the final third of the film finds him processing, attempting to reroute, and even reviving Michael Caine with Brydon as a needed escape from the weight of his newfound circumstances. In one particular scene, Coogan is shown to his lodgings in Andalucía by an English teenager. The room had been intended for both him and his son before Joe’s travel plans had to change. Coogan, after exchanging pleasantries, can’t help but ask the boy his age, a telling sign of where his mind and heart are. As Coogan learns, the sweet spot will always be tenuous territory for fathers.

Like Italy before it, Spain doesn’t prove as rich a journey as Coogan and Brydon’s original trip. For fans of the comics, bits, scenery, and pacing, the formula is still successfully in play for the most part, and everyone will pick out their favorite moments of Coogan and Brydon’s brilliant shtick. Do the emotional stakes of the film surface a little too late? Perhaps, but as we find Coogan alone, out of petrol, and walking down a road for help, we get the sense that the most taxing leg of his trip won’t be contained by a single country or film. More seems to be on the way, and that makes us and Michael Caine very curious, indeed.