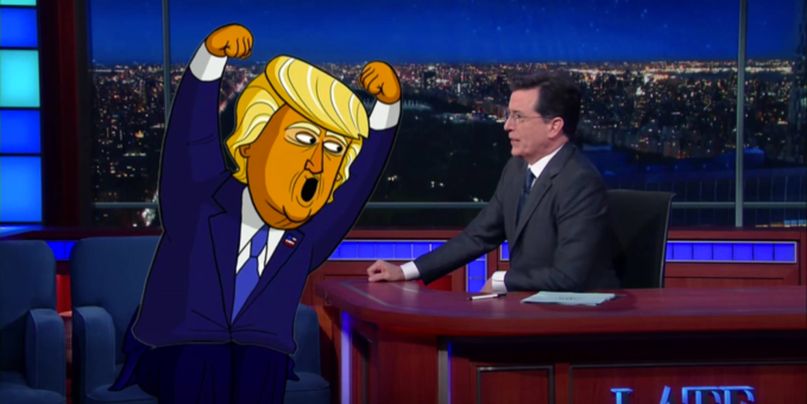 With Twin Peaks wrapping up soon and Showtime likely desperate to hold onto its new influx of subscribers, the network is relying on two men who have a history of driving ratings: Donald Trump and Stephen Colbert.

The project is an animated satirical series executive-produced by Colbert and Chris Licht that will serve as an extension of the cartoon version of Trump that’s become a routine guest on Late Night. According to Variety, it will explore the “tru-ish adventures of Trump’s confidants and bon vivants — family, top associates, heads of government, golf pros, and anyone else straying into his orbit — intrepidly exploring their histories and their psyches, revealing insights into what makes them so definitively Trumpian.” Though animated, the 10-episode series will unfold through the POV of an imaginary documentary crew.

The show has been greenlit and will undergo a quick, timely production period — a la South Park — in order to stay up to date on Trump’s latest peccadilloes. Considering this administration, however, that’s probably a futile gesture.

(Read: Which TV Network is Having the Best Year?)

“I know a lot of people wanted to do this, and I’m honored that the Cartoon President invited our documentary crew into his private world,” Colbert joked. “I’ve seen some of the footage, and I look forward to sharing the man behind the MAGA.”

Showtime president and CEO David Nevins said of the show, “Stephen and Chris have an uncanny genius for deconstructing the world of President Trump, and this series opens a new realm for them. Their vision will produce a comedy that makes waves, gets attention, and plays great on our networks, including our streaming service.”

Colbert previously worked with Showtime on his election special, Stephen Colbert’s Live Election Night Democracy’s Series Finale: Who’s Going to Clean Up This Sh*t?. Showtime is also no stranger to politics, with shows like The Circus, Risk, and The Putin Interviews in their portfolio. The network also just picked up Ben Affleck and Matt Damon’s City on a Hill, which focuses on the Boston Miracle policy that curbed youth gun violence in mid-1990s Boston.

Here’s hoping this animated political satire is better than That’s My Bush. Whatever it ends up being called, it’ll be the second fictional show centered around 45, with Anthony Atamanuik portraying POTUS as the host of his own late night talk show on Comedy Central’s The President Show.