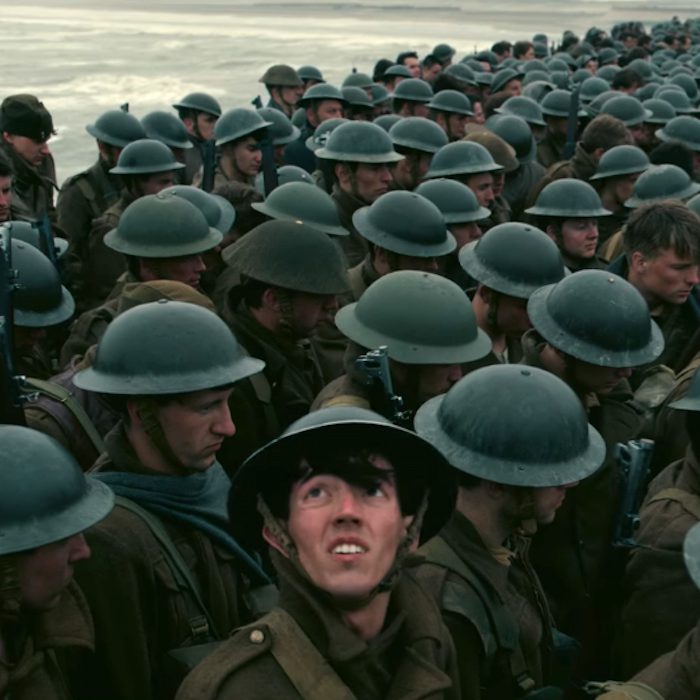 Tick, tock. Time is running out.

The boy (Fionn Whitehead) appears to be nameless. It doesn’t matter, really. He could be any young man. And he has the will to survive.

He’s isolated on the empty streets of Dunkirk, France. Papers drop from the air. Through swift cuts to title cards, calculated shots of lost boys, and flyer copy, the scenario is clear and presented at a soft clip. It’s 1940. Wartime. The boy is surrounded by enemy forces.

Gunshots arrive like hellfire, zipping by with the intent to kill. The boy hangs in there for dear life, running through gardens, fumbling with his rifle. But he manages to get out by the skin of his teeth. He’s made it to a beach. It’s gray and windy, but it feels safer than the streets. The British armed forces are there, and the boy finds a sense of calm in being near allies. A nervous calm, but calm all the same. Everybody’s waiting in lines at the shore. The boats out of Dunkirk are filling up fast. It’s an evacuation, and the boy is just one of 400,000 soldiers trying to leave. British military. French, too. Belgians, Polish officers, Canadians as well. If only their homecoming was as easy as getting on a bus.

Here come the Luftwaffe in their planes. Black dots in the sky, like descending gargoyles. The sound of arriving engines howls to a high pitch. The boy, petrified as he may be, reacts as well as he can. He ducks. Bombs drop. The boy is tightly photographed in the foreground, clasping his head. Boom. Boom. BOOM. The drops get closer and closer to the boy. BOOM! And then … the air clears. The bombs stop. The boy is safe, at least for now.

That’s just the opening five minutes of Dunkirk. Relax, you can breathe now. But make it quick. More’s coming.

(Ranking: Every Christopher Nolan Movie from Worst to Best)

Dunkirk is overwhelming in an exceptional sort of way, a film that demands close study of everything seen and heard. It’s a series of functioning contradictions, walking a tightrope in a stomach-dropping exercise of assured craftsmanship. It’s a film both timeless and of-the-moment. Airy, yet packed to the brim. Fast, but reflective. It’s a white-knuckle fable that strips the politics and gore of war down to the most elemental and essential storytelling. This is a film of fear, hope, and survival. The technical acumen, fleet-footed pacing, traversing narratives, and insistence on precise artistry and design make Dunkirk unlike any other blockbuster on the market. And yet it learns and borrows from the great films, taking the time to maximize its photographic, editorial, and musical elements to stirring effect.

It’s in the tilt of the camera that drowns a shipman. The eyes of young soldiers looking on in hope of escape. The vibration of the camera riding with a pilot. The turquoise and tan and rose-colored environments. The frayed violins in Hans Zimmer’s score. The euphoric catharsis that arrives after ceaseless peril. This is a rare sort of entertainment. Study it. Be ensnared by it. This is Christopher Nolan’s new clockwork classic, Dunkirk.

Nolan recalls the Dunkirk evacuation, code-named Operation Dynamo. It’s one of the great, under-told war stories of the 21st century, and has rarely appeared on film (the 1958 film Dunkirk, the stirring single-take journey in Atonement). The English were in retreat after the Battle of Dunkirk, and in trying to leave the beaches, the overcrowded sand and sea made the Allied forces sitting ducks for the Germans. But the subsequent events, including a flotilla of civilian ships coming to the rescue, is nothing short of spectacular. The events of Dunkirk tell of humanitarian salvation, speaking to British identity – a gripping lost-but-won historical narrative.

Dunkirk presents these events through a nesting-doll triptych of inspired creation, as Nolan creates a swirling, encroaching clock of stories. There’s segment one, “The Mole,” a week-long series of events revolving around the foot soldiers of Dunkirk (including the aforementioned boy). The Mole refers to the giant stone walls on the beaches of Dunkirk, which housed so many men waiting for ships. These moles acted like shooting galleries for German planes, so the soldiers would crouch, hide, and save themselves by any means necessary. The boy and other young soldiers sneak onto boats, hide under piers, crouch in the bowels of beached ships. Sometimes they just hit the sand and pray when the bombs drop.

There’s part two, “The Sea.” It takes place over one day, and focuses on the armada of ships coming to help. Nolan specifically zones in on a father and two boys; Mr. Dawson (Mark Rylance, evoking great courage and worry) is a weekend sailor, but he’s got a job to do, as he puts it. He’s the film’s thematic through-line, with simple statements on the urgency of the matter, demystifying the complications of the Dunkirk situation. “There’s no hiding from this,” he cants to a PTSD-stricken fighter (Cillian Muprhy) on his boat.

Part three, “The Air,” takes place over one hour and revolves around two Spitfire pilots, Collins (Jack Lowden) and Farrier (Tom Hardy). It’s a stunning series of aerial ballets, as the pair swoop and careen through the sky to shoot down planes and avoid being shot themselves. Fuel is limited. Time is of the essence. They must stop the Germans from eviscerating destroyers and boats and more men. Their emotions are expressed solely through the eyes behind their bomber masks.

The three chapters combine in what’s best described as a cyclotron of plot. Each story informs and plays off the others. (It’s classic Nolan, as he’s always had a propensity for layering stories, in this case stories rooted in Graham Swift’s novel Waterland.) But unlike the lugubrious over-cooking of The Dark Knight Rises, Dunkirk is much stricter and more focused. A pilot attempts to escape his downed plane on the water, but the hatch is broken. Cut to: young men furiously trying to pin holes in a boat under fire. Cut to: another pilot forced to take to the reserves in his Spitfire. Cut back to: the initial pilot, still sinking, unclear if he has any chance of escaping the downed vehicle. Dunkirk has a rhythm all its own, and it propels the film with such frenetic assurance that any catharsis feels epic in its impact.

Nolan has professed that the key drive of Dunkirk is simple: will these people get out of this? There’s oil in the water. Unlimited bombs on planes. U-boats. Bullets. Selfishness. Mistrust between men. Dunkirk is about the fear of loss, of life and character. But the will to fight for self-preservation is key, and it’s what drives Dunkirk. What’s more human than that?

By minimalizing his loftier techniques and tendencies of the past with brusque pacing and grand photography, Nolan has assembled the leanest and most impassioned film of his career. The editorial trickery is less a gimmick than a means of impact, and Nolan’s other choices are equally perfect. The dialogue is sparse; faces, eyes, and physical action do the talking, and historical events become impressionistic. He’s interested in the moods and feelings found in trials by fire, more so than the superlative effects.

The beauteous horizon lines of Old Hollywood films are framed with Dutch angles from cinematographer Hoyte Van Hoytema, reinforcing that nothing is safe or secure. The sudden color changes between shots and stories fit every moment, whether it’s a cool blue sunset or a whitened lens flare to illustrate a captain’s dread. Helmets for the fallen. Sea foam and crashing waves perpetuating the constant flow of war. Zimmer’s score samples clock sounds alongside twisted strings and synthesizers, building an orchestra with the speed of a ‘90s action film that fits the film’s momentum. The actors involved – Kenneth Branagh, James D’Arcy, pop star supreme Harry Styles – give assured, nuanced, and evocative performances, encapsulating the grief, woe, and determination required of people in this situation. Everything in its right place.

Early on, Nolan squarely frames two boys lifting a gurney and running across the beach to get a wounded soldier onto a parting ship. They clearly want to use his injury to get on board themselves. No words are really spoken; they just know this is a way out. On the soundtrack, two disparate strings begin to emerge, forming an edgy pizzicato as each struggles to match the other. Nolan tracks the duo as they try to muscle their way through the crowd, through holes in the pier and other obstacles, utilizing handheld camerawork at points to enforce the claustrophobia and their inability to leave. Will they make it? Will this work? Nolan never misses a note. His form is divine, and conjures all the enthusiasm of a professional working at his peak, while playing with new ideas. And the gurney sequence is just one great progression of image, sound, and wartime madness, placed among what feels like dozens of great ones by the film’s end.

Nolan is the best watch-maker in the business, and there’s no greater showcase of his gifts for machination and cinema scholarship than Dunkirk. It’s been written that the director screened and studied films like Greed, Foreign Correspondent, Ryan’s Daughter, Saving Private Ryan, Speed, and even Unstoppable to find inspiration for his latest film. That syllabus and enthusiasm for film history shows in the execution of his film, but only the finest spare parts apply. His film has the visual palette of a Rembrandt, the fast and secure editing of a peak Tony Scott outing, the soulful stare and contemplative gaze of a great silent work from Murnau. And the 70mm photography? Unparalleled in 2017. Lean would blush. But it’s all Nolan; surprisingly taut, and utterly sincere.

Nolan, ever the ingenuity-driven cineaste, has gifted us with a ravishing, almost revolutionary style of big-budget filmmaking that amounts to the sum of some truly fine parts. It’s a master class in form, and a high mark for an already accomplished director. Sitting at the corner of complex art and popcorn adrenaline, Nolan has forged a seamless blend. By mixing technique, history, and thematic calls to action, here’s a classical-yet-modernist action film that will be taken apart and put on display in film schools and film clubs for years to come.