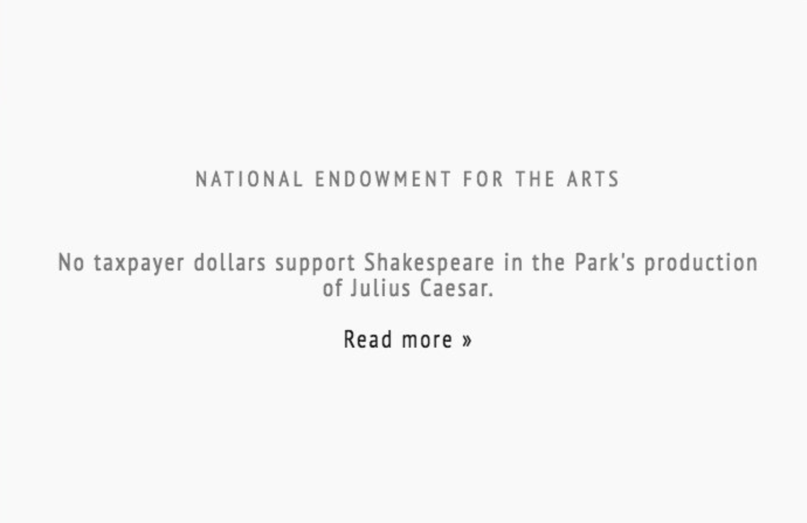 A modernized adaptation of Shakespeare’s Julius Caesar has drawn criticism for its portrayal of a Trump-like Roman dictator who is assassinated by women and minorities. Though Donald Trump’s name is never mentioned in the play, the character leaves little to the imagination: he has blonde hair, wears a red tie, tweets from a golden bathtub, and is married to a woman with a Slavic accent. Thus, conservative media has been quick to latch onto a narrative of liberal literary snowflakes wasting taxpayers’ money to live out their fantasies of assassinating our supreme emperor in the name of art. That despite the fact that Julius Caesar was written 400 years ago and a previous staging in 2012 laid the same fate on an Obama-like figure.

I wonder how much of this "art" is funded by taxpayers? Serious question, when does "art" become political speech & does that change things? https://t.co/JfOmLLBJCn

Well, Don Jr., the answer is actually zero. Z-e-r-o tax-funded dollars went to Trump-themed Julius Caesar, and we know that because Trump’s own National Endowments for the Arts had updated its website to inform the public as much.

The NEA, which itself is on chopping block, was quick to placate Trump and his fragile ego, no doubt after receiving an email from the president himself. A popup on the agency’s website indicates that “no NEA funds have been awarded to support this summer’s Shakespeare in the Park production of Julius Caesar and there are no NEA funds supporting the New York State Council on the Arts’ grant to Public Theater or its performances.”

Once again, the Trumps can’t agree on one unified message.