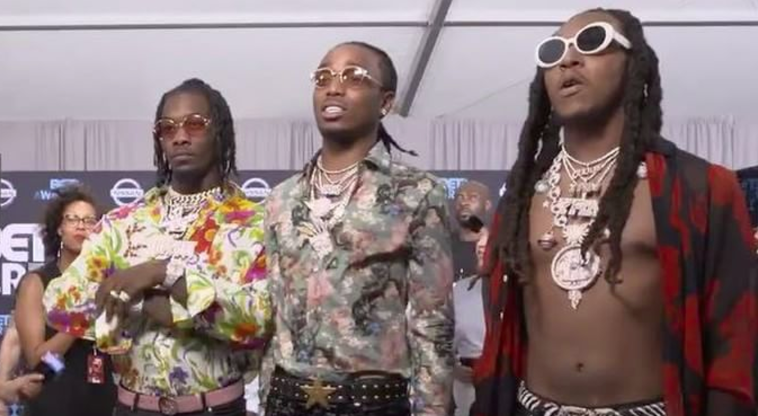 Migos made quite an impact at the BET Music Awards last night, taking home the award for Best Duo/Group in addition to igniting the crowd with performances of “T-Shirt”, and “Bad and Boujee”. The group’s Quavo also guested on DJ Khaled’s performance of “I’m the One” alongside Chance the Rapper and Lil Wayne. Not bad.

The night didn’t end without a little turmoil, however, as the group were involved in two separate altercations. During a pre-shot red carpet interview, Offset nearly came to blows with fellow rapper Joe Budden following a tense interview. Seemingly irked by the group’s terse answers, Budden dropped his mic and walked off the set. Words were exchanged and a member of Migos’ entourage pushed Budden before security intervened.

Later in the night, Migos nearly got into a second altercation with noted rabblerouser Chris Brown. Brown had apparently just debuted a new music video with Future when he crossed paths with Migos. Soon after, witnesses say a member of Brown’s group pushed Quavo, leading to a scrap that may have resulted in a member of Migos’ crew getting punched. TMZ provided some short video of the incident, but it doesn’t reveal much.

A lil footage of the Chris brown & Migos altercation. pic.twitter.com/yIDM2eXkEv

Brown, knowing the last thing he needs is more drama, apparently disengaged and kept walking during the ordeal. Migos, however, followed the rapper to his car, where a tense showdown unfolded. So tense was this situation the cops were called, though they didn’t show until all parties had left the scene. Everyone, it appears, was unharmed.