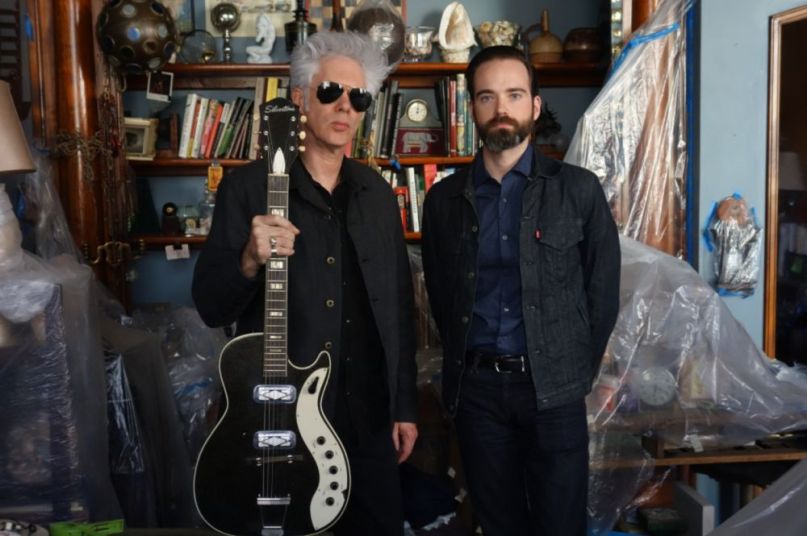 SQÜRL, the psychedelic trio featuring filmmaker Jim Jarmusch on guitar and Carter Logan on drums with Shane Stoneback creating loops and arrangements, was originally formed under the name Bad Rabbit to contribute music to Jarmusch’s 2009 film, The Limits of Control. Since then, they’ve had a steady run of releases, marked most recently by last year’s full-length, Live at Third Man Records. Now, they’re back with their first EP for Sacred Bones Records, EP #260, due out July 14th.

The five-track release features three new songs from the group, along with remixes by Anton Newcombe (of The Brian Jonestown Massacre) and Föllakzoid. As for the meaning behind its title, it’s better to let Jarmusch explain it:

“260 is none of these. It isn’t a perfect number, and not factional of any number. It’s not even a regular number. 260, though, is the number of days in all Mesoamerican calendars. The Mayan calendar. The Tolkien calendar. 260 is also the number of days of human gestation. (Orangutans also). 260 also has an elliptical connection to the dark rift; a series of molecular dust clouds located between our solar system and the Sagittarius Arm of the Milky Way. And although not a magic number, 260 is the magic constant of the magic square investigated by Benjamin Franklin, and part of the solution to a famous chess problem; the n-queens problem for n=8. 260 is also the country code for Zambia. And the US area code for Fort Wayne, Indiana. Therefore, SQÜRL has labeled this recording EP #260.”

Ahead of the release, SQÜRL has released the heavy instrumental track, “The Dark Rift”. The ominous and hazy new tune features droning, distorted guitars and thudding percussion. Listen to it below.

Prior to finding fame as a filmmaker, Jarmusch spent the early ’80s playing in the No Wave band, The Del-Byzanteens, as well as Dark Day with fellow Ohio expat and DNA founder Robin Crutchfield. Apart from SQÜRL, he has collaborated with lutist Jozef Van Wissem on the 2012 albums, Concerning the Entrance into Eternity and The Mystery of Heaven.