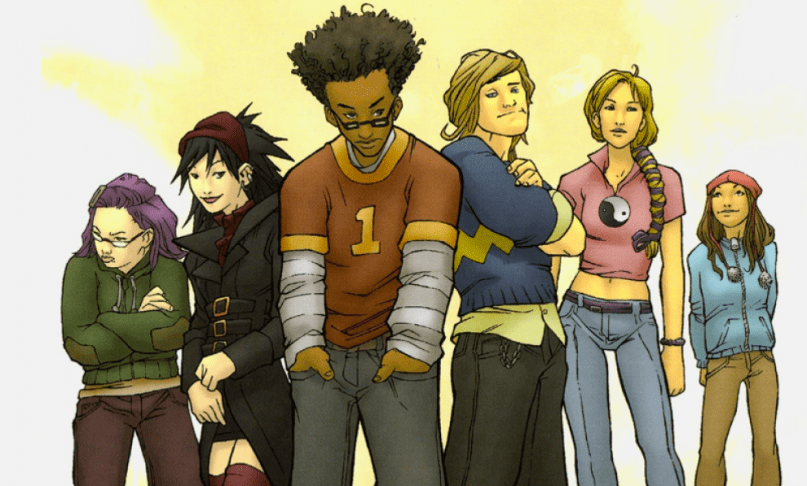 Marvel had been trying to adapt Brian K. Vaughan and Adriana Alphona’s acclaimed Runaways for years before finally striking a deal with Hulu for a live-action series last summer. With filming expected to begin on February 13th, the two companies have now announced the cast of the teenage superhero show.

Rhenzy Feliz (Teen Wolf) leads the way as Alex Wilder, a nerdy loner and prodigal genius when it comes to strategy. Lyrica Okano (The Affair) plays the group’s default head, Nico Minoru, an angsty and intelligent Wiccan who finds she can actually perform magic thanks to her mystical staff. Virginia Gardner (Goat) takes on the part of one of the team’s most outlandish members, Karolina Dean, a solar-powered alien with model-like appearances.

However, that’s nothing compared to Ariela Barer’s (One Day at a Time) Gertrude Yorkes, a purple-haired riot grrrl who, thanks to her time-traveling parents, has an empathic and telepathic link with a genetically engineered dinosaur from the future named Old Lace. Greg Sulkin (Faking It) plays Chase Stein, a high school jock who wields a pair of flame-throwing gloves called the Fistigons. Finally, Allegra Acosta (100 Things to Do Before High School) has been cast as Molly, the youngest member of the team whose super-strength and invulnerability also makes her one of the most powerful. Molly is a mutant in the comics, but since FOX owns the rights to that term thanks to their X-Men deal, it’s likely the Hulu series will have to find a workaround (perhaps relating to the Inhumans?).

The story centers around a group of teens who are forced to put aside their animosity when they discover their parents are members of a secret villainous cabal known as The Pride. On the run from their families, they must figure out how to get along and survive while discovering new powers and abilities of their very own.

Runaways isn’t the only serialized adventure Marvel is bringing to the streaming world. Freeform Network recently cast their Cloak and Dagger adaptation, with Olivia Holt (Kickin’ It) playing Dagger and Aubrey Joseph (The Night Of) portraying Cloak. The show is a coming-of-age tale about two runaway teens with extraordinary abilities; one has the power to create psionic “light daggers” that can sap a person’s strength or heal them (Dagger), and the other is armed with a magical cloak that allows him to transport enemies to a realm of darkness, teleport, and become intangible (Cloak).