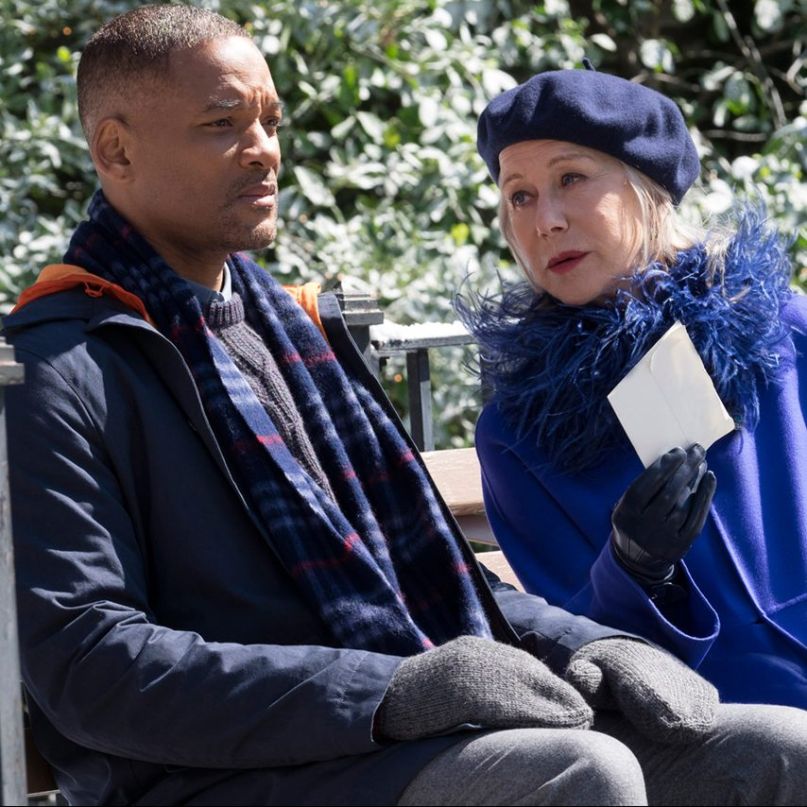 To declare Collateral Beauty a bad film simply because of the earnestness with which it’s made misses the point. Indeed, Collateral Beauty is a bad film. By the time it reaches its ridiculous, largely nonsensical climax, it could accurately be called a very bad film. That it is not among the worst of the year is a testament to the talents of its grossly misused cast. But it is not a bad film because of its sincerity of intention. It’s a bad film because it manages to make that sincerity feel disingenuous as it goes on, more and more so with each passing scene.

Howard (Will Smith) is a marketing genius, and if you miss that fact, Collateral Beauty will tell you so repeatedly. He’s the head of a successful agency, where he inspires his workers to do more than simply “sell shit.” He believes that advertising is less about sales than about “connecting,” about creating something which resonates more deeply with people. But three years after the film’s brief introduction to this version of Howard, he’s slack-shouldered, unshaven (at least in that leading man kind of way where a little stubble connotes emotional collapse), and only shows up to work to build elaborate domino tower patterns, if he does at all. Howard lost his young daughter to cancer, and finds himself in the throes of an existential collapse, distancing himself from his friends and spending most of his time racing nowhere on his bike, sometimes against traffic.

His coworkers, however, are worried both for Howard’s sanity, and that his inability to do his job is going to get the agency shut down. (Howard’s knack for personal relationships appears to be his agency’s sole source of income, which seems fiscally reckless, but these quibbles are the least of the film’s issues.) Their solution? Prove that Howard is unfit to lead the company by hiring a theatre troupe to gaslight him, and a private investigator to capture it on film. As you do. Since Howard has been writing letters to Love, Death, and Time in an attempt to rationalize the inexplicable, the actors are hired to tail Howard and manifest his grief in physical form. Brigitte (Helen Mirren) is an old-school hippie type who dives into the role of Death with vigor, Raffi (Jacob Latimore) is the punk kid who stands in for Time, and Amy (Keira Knightley) takes on Love, despite her misgivings about what they’ve been hired to do. Together, they begin to validate Howard’s suspicions that he may in fact be going mad through a series of increasingly contentious public encounters.

The first in a series of crucial logical holes in Collateral Beauty is one on which the entire film is hinged: that anybody in the film is actually Howard’s friend, rather than a craven opportunist exploiting a man who’s clearly suffering from some kind of mental illness. Allen Loeb’s screenplay doesn’t seem to interpret the con against Howard as something particularly destructive; though concerns are raised throughout the film regarding the ethics of what they’re doing, the film never takes a particular stance on whether what they’re doing is right or wrong. (If it’s not the year’s worst screenplay, it certainly might be its most ill-considered, right up to and including the point at which its title is explained, and then repeated several times, as if to coin it as a phrase audiences will carry with them for years to come.)

Instead, we’re treated to the personal melodramas of Howard’s “friends,” each of whom get a distinguishing personal conflict to give the film something to talk about when it’s not playing out its bizarre, sort of terrifying scenario of group mental abuse. Claire (Kate Winslet) wants to have a kid before it’s too late. Simon (Michael Peña) has a young son, and worries about his ability to provide for his family because of his own secrets. And Whit (Edward Norton) is despondent in the wake of his divorce, and that his young daughter refuses to talk to or see him in any way shape or form. In a fine illustration of the film’s general approach to morality, Whit repeatedly acknowledges that he slept with a younger woman and caused the divorce. Collateral Beauty largely plays this for comic relief, before it tries to find pathos in Whit’s struggle. (Comic beats where they don’t belong at all are one of the film’s preferred crutches, and they fit in about as naturally as you might expect.)

Under David Frankel’s direction (who, in fairness, inherited this project after the previous director dropped out), Collateral Beauty plays out like the most deliriously unhinged Hallmark movie you’ve ever seen. Even tabling the deceit at the film’s center (which, as it can’t be mentioned enough, is a grieving father being driven further into madness so that he’ll sign over control of his ad company), the eventual parallels drawn between the three performances and the struggles of Howard’s friends ring hollow because of their general callousness. The film wastes a handful of engaged performances (Peña and Mirren share a majority of their respective screen time, and come the closest to making something of nothing), and worse, makes one start to wonder after a while exactly how talent of this caliber ended up in a film like this one, and what about it could have been appealing in the first place.

The premise of the film is the kind of sentimental hokum that always tends to pop up around this time of year, but the latent sociopathy of its central premise is what takes Collateral Beauty out of the realm of “bad holiday movies” and into “how does this exist?” territory. Given the generally pedestrian, uneventful filmmaking, it’s hard to focus one’s attention on anything other than the film’s spectacularly misguided storytelling, and as Will Smith melodramas with bad narrative ideas go, Collateral Beauty is just a tub full of ice and a jellyfish behind Seven Pounds. Yet by the time the film gets around to its pair of climactic twists, one which steps on much of the movie before it and one which makes virtually no sense under even the slightest scrutiny, it makes a capable case for itself as the worst of Smith’s serious-minded dramas.

Collateral Beauty is a film that’s virtually impossible to take seriously, despite dealing with the most personal kind of thematic material, and what makes this all the more tragic is how committed Smith is to Howard’s journey of grief and possible salvation. His eyes are perpetually half-welled with tears, and Smith capably tells the story of a man in the throes of bottomless despair in the middle of a film that does virtually nothing to underscore or legitimize that despair. In his scenes with Naomie Harris, as a grief counselor who tries to reach out to Howard, both actors find vulnerability beneath the film’s alternately clichéd and soulless storytelling, Smith in particular. But there’s little resonance to Howard’s journey, and less still in its baffling payoff. And though Collateral Beauty absolutely tries to find it in every exaggerated swell of strings and every long-winded soliloquy about fate/death/existence and every bit of holiday set dressing, it’s all as insincere as the con at its center.