Hokey titles and ancient software are no match for a good controller at your side, kid 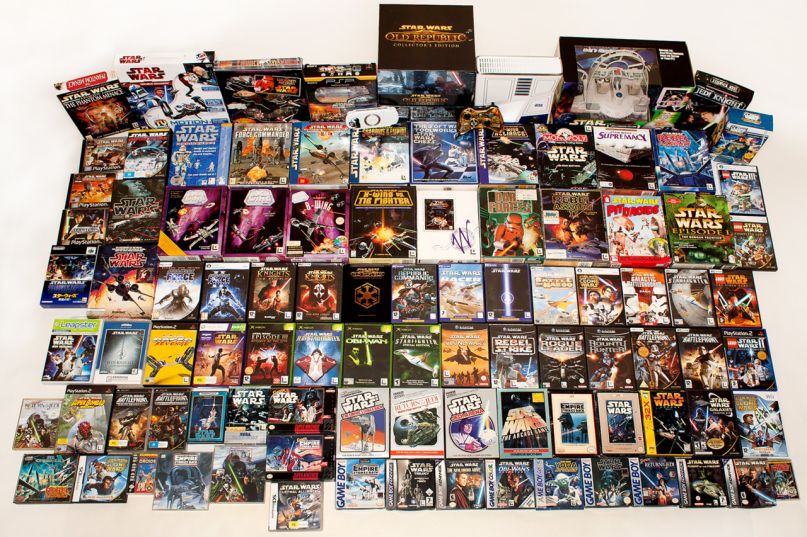 This article was originally published in November 2015.

A long time ago, we were just stargazing kids, worshipping our letterbox collection of George Lucas’ original Star Wars trilogy. Years later, the Force is strong with us once again as we do the Imperial March towards Gareth Edwards’ highly anticipated spinoff film, Rogue One: A Star Wars Story. To celebrate, we’re spending this week talking about Nothing But Star Wars! with a rogue squadron of features, essays, and stories. Today, we’re keeping the series alive by revisiting the franchise’s best and worst video games.

Star Wars has enjoyed a long, fruitful history with video games — you know, just like it’s had with action figures, books, comics, underwear, toiletries, and the list goes on and on until it dissolves into space like one of the film’s epic opening scrawls.

Merchandising has never been a shortcoming of this franchise, which is partly why it’s such an enduring brand and explains how multiple generations can attest to collective all of the above. At some point in our lives, we’ve all wanted to be Jedis or starfighters…

That’s why gaming has been so fruitful. Whether it’s an action-adventure game that pits you as a dashing smuggler or a flight simulator that takes you to the skies like an obedient TIE Fighter pilot, they’ve all made galactic fantasies come true.

Odds are everyone’s played one title from time to time, and with all of this Star Wars hoopla going down, us half-witted, scruffy-looking nerf-herders got nostalgic and felt the need to talk about all the old Star Wars games we loved … and hated.

Needless to say, there have been a ton over the last four decades. What started out as an unofficial game for the Apple II has since evolved into an all encompassing enterprise that has capitalized on every genre out there — from action to MMORPG to strategy.

So, as you wait to watch Rogue One, grab a controller and head back in time with us.

Jumping fast, thinking quick, and having all the patience in the world is a large part of action gaming, but so are multi-skilled characters, colorful environments, and gripping stories. Which is why the sprawling world of Star Wars has proven to be so essential to the genre; from 1977’s A New Hope all the way up to 2005’s Revenge of the Sith, each film has offered an enviable blueprint for developers to use and translate into a button-smashing adventure.

Though, only a handful of games have actually succeeded. The early ’90s side-scrollers were faithful to the original trilogy, only they proved more irritating than fun, especially the SNES ports that ushered excited fans into the Dark Side with aggravating levels and obstacles. It wasn’t until Nintendo 64’s Shadows of the Empire that gamers were able to step into the light and truly feel the spirit of the franchise, a feeling that’s only grown stronger with titles like The Force Unleashed and Battlefront.

It’s a shame that Nintendo hasn’t commissioned a facelift of this blockbuster game. Because really, blocky graphics and a hefty lack of voice acting is about the only mark against Shadows of the Empire. It was a goddamn blast playing nearly 20 years ago, and it’s just as fun playing today — that is, if you can manage to find an N64. Thanks to an original story, fans experienced The Empire Strikes Back in a whole new way, playing as agreeable Han Solo stand-in Dash Rendar, who slogged through the junkyards of Ord Mantell, braved the streets of Mos Eisley, and blasted through Coruscant in an effort to save his smuggling doppelgänger and help Luke, Leia, Lando, and Chewie in the process. Sadly, it’s no longer part of the Expanded Universe — or is it?

I’ve Got a Bad Feeling About This (Still Holds Up): The Force Unleashed (2008)

Despite lame character names like Starkiller and a story that screams of fan fiction, The Force Unleashed is one of the few titles from LucasArts that doesn’t feel dated. The combination of Havok’s body physics, Pixelux Entertainment’s real-world environments, and NaturalMotion’s artificial intelligence offered up an experience that, for many, was on par with seeing Star Wars for the first time. Released three years after Revenge of the Sith, the third-person action-adventure also roped in longtime veteran fans who felt marginalized after years of prequel-related titles with a story that connected to A New Hope. Needless to say, there’s a reason Starkiller actor Sam Witwer appears at Star Wars conventions year after year.

Out of all the side-scrollers, you’ll only need to play 1991’s Star Wars for the Nintendo. For one, the 8-bit renditions of John Williams’ score are exceptional enough to download separately, and it’s also the only game from that era that isn’t nearly as cruel and uncompromising as its 16-bit upgrades for the Super Nintendo. Case in point: Super Empire Strikes Back, the worst of the three adaptations, is basically one long laugh riot on behalf of the developers, who must have been commissioned to craft the most annoying game imaginable. Try playing the first level and see how long it takes before you burn your house down. Who knew the sub-arctic temperatures of Hoth could rival an Amazon rainforest with dangerous wildlife. #theworst