Film Review: Army of One 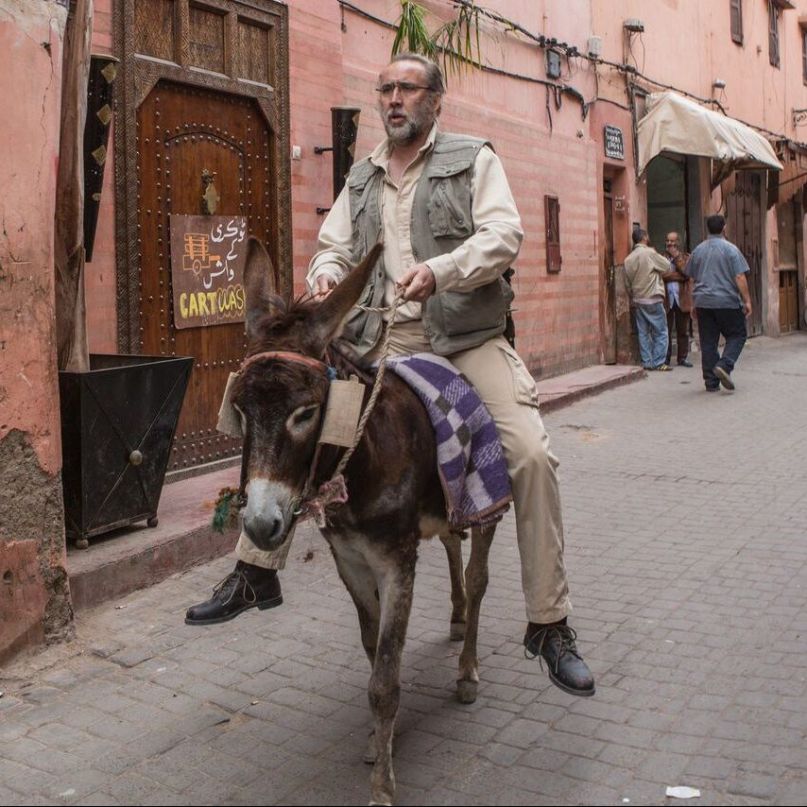 “NOW MY DAD USED TO CALL ME A JACKASS WHEN I WAS A KID. AND AT FIRST I THOUGHT IT WAS AN INSULT. AND THEN I REALIZED IT WAS A COMPLIMENT BECAUSE JACKASSES ARE TRUE, HARD-WORKING, AND LOYAL!”

Pardon the broken caps lock, but there’s something to this line. Gary Faulkner, a homeless, couch-riding handyman, just talks like this. Fast, confident, amiably, awkwardly. He’s a little inarticulate, but you know where he stands, and get the sense that he means really well. This is a line Faulkner delivers to a young girl with cerebral palsy while discussing spirit animals. The girl’s amused. It’s sweet. Strange. But sweet nonetheless.

But most important to the enjoyment of Larry Charles’ new movie Army of One is the truth that you can’t keep a good Cage down. Nicolas Cage, the fading star given to pay-for-home viewing play, is really something here. He sees your claims of laziness, and laughs. As Faulkner, he’s a dazzling screwball creation, slightly sillier than the real thing, sporting a samurai sword and a Jimmy Stewart demeanor. This nasal nut is actually a pretty decent fellow. And Cage, through sloppy charisma, moxie, and the crazed Cage-iness for which the actor’s always been known, makes Faulkner.

That’s the minor bombshell of Army of One, a potentially lowbrow, one-note joke made fun by its warmhearted tone, and a hollering lead performance from Cage. It’s a hoot, with heart. Funny, saying that, given the bugshit premise.

Reality check. In 2010, Gary Faulkner managed to make his way into Pakistan and was arrested at the Afghan border. His mission: personally take down Osama Bin Laden. He made many trips. The guy was laughed off by authorities until they found a gun on him, along with a 40-inch sword, a dagger, and handcuffs. And a nice pile of hash. And Christian writings. Was this guy a kook? Trying to score drugs? Or really on a mission from God? Either way, he made the papers. Was a punchy Letterman guest. Was too rare a bird to not make a movie out of him.

Army of One recounts Faulkner, through Quixotan whimsy and geo-political smart aleck humor, which amounts to a quick screwball comedy about a loveable fuckup. Cage doesn’t Rage, but instead cowers and squeals his way through Faulkner’s tale. We meet the man in his underwear, sleeping in a construction site, awakened by his phone. “Pickles!” he screams to a buddy over the phone. The guy’s unflappable.

Gary’s on regular dialysis because of kidney disease, but he doesn’t let it slow him down. He runs his mouth off about foreign products at the Home Depot, not out of spite for other countries, but out of his pride in the American can-do spirit. What a guy. And when he bitches about the armed forces doing a so-so job of ending Bin Laden at a bar, the resulting confrontation with Marines results in good-natured ribbing. And an accidental stabbing at a dart board. But it’s a funny stabbing, promise!

Shockingly, the movie treats Gary with more kindness than you might think. The sporadic narration elaborates that Gary “does not suffer from paranoia, psychosis,” or any of the old familiars. His American flag parasail and American flag goggles, while absurd, are also rooted in a man’s pure love of country. It’s the film’s best quality. He hopes to impress the girl, make some money, and do right for a U.S. still haunted by 9/11. And Army of One’s biggest success is his comedy of failures.

Cage is just a guy who can’t get his stuff right no matter how hard he tries. Sailing and parasailing into Pakistan seems dumb, but Faulkner went for it. And he doesn’t go in for the sake of anger and jingoism. He loves the food, the people, the weed. You have to admire a person who’s both determined and open to possibility. Cage commits to this persona, and this representation of Faulkner as the best of American naiveté. And the film loves him for it. He’s awkward, but always welcomed by everyone.

When the film lapses into psychosis – he has visions of God telling him to apprehend Bin Laden, and God is played by Russell Brand – it’s lazily edgy. This is needless, and constitutes roughly a third of the film. Occasionally amusing, maybe. But Osama Bin Laden appearing in a dream for his episode of Cribs is a neat sketch in search of a sitcom elsewhere. And Faulkner sparring off with surreal thugs at a hotel doesn’t work. There are meta jokes on the casting, little bits of referential humor about James Bond. The more sensational the movie gets, the weaker it is. But Cage holds down the fort, long and strong.

Army of One is at its best focusing on Gary Faulkner, a guy who prefers going into combat with honor and nothing more but his wits and a sword. And Cage comes out not like an ass, but an unsung comic hero.

The film opens in theaters this weekend, but is now available to buy on Apple and Vudu. It will be on Blu-ray by the end of the month. But most importantly, the Cage video of silly moments from the film will likely be on YouTube by the new year. Watching Cage slice melons with a sword sporting a ponytail will be worth it.