Rock's biggest legacy act doesn't have to take over the world. At this point, they could just buy it. 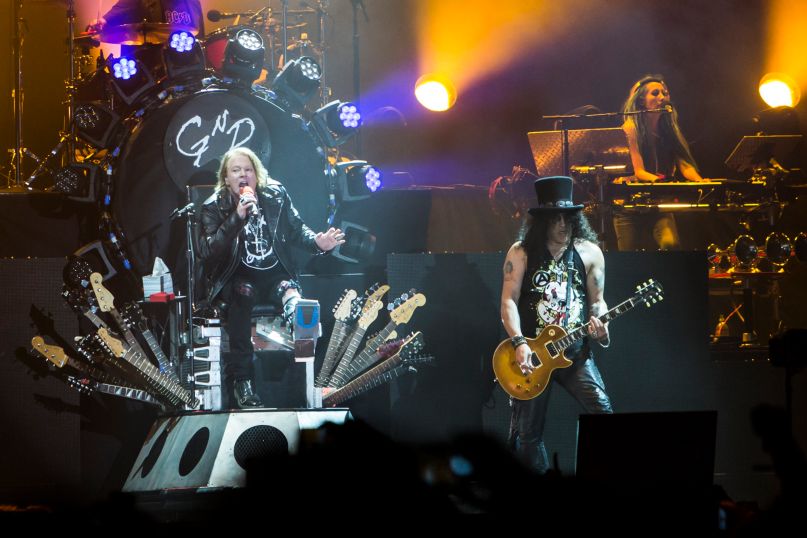 Listen, we’re not boneheads. When Guns N’ Roses announced plans to reunite their classic lineup (minus Izzy Stradlin and Steven Adler) for a North American summer tour, we knew it wasn’t for some higher creative purpose. Nope. Axl Rose, Slash, and Duff McKagan wanted some of that scrilla, plain and simple, and they weren’t even willing to “split the loot equally” with Stradlin.

But good lord. Based on information from Billboard’s latest Boxscore, the Guns N’ Roses reunion is raking in a silly amount of cash. Their show with Lenny Kravitz at MetLife Stadium in East Rutherford, NJ, resulted in an incredible gross of $11,687,391, while dates with The Cult ($8,917,758), Alice In Chains ($8,843,684), and freaking Skrillex ($6,166,657) pulled in an equally ludicrous amount of money. All together, gross ticket sales of GNR’s Not In This Lifetime Tour exceeded $112 million.

We should note that all of that cash doesn’t go directly into the band members’ bank accounts, as they’ve got a big crew to take care of. But the numbers also don’t include any money earned from merch sales, which … oh god. Oh dear, dear god.

See the full list of shows and earnings here, and prepare to bow down to your new rock overlords.

Watch our episode of Masterpiece Reviews on Guns N’ Roses’ Appetite For Destruction: