At the risk of coming off catty, this unfunny family vehicle is far from purrfect 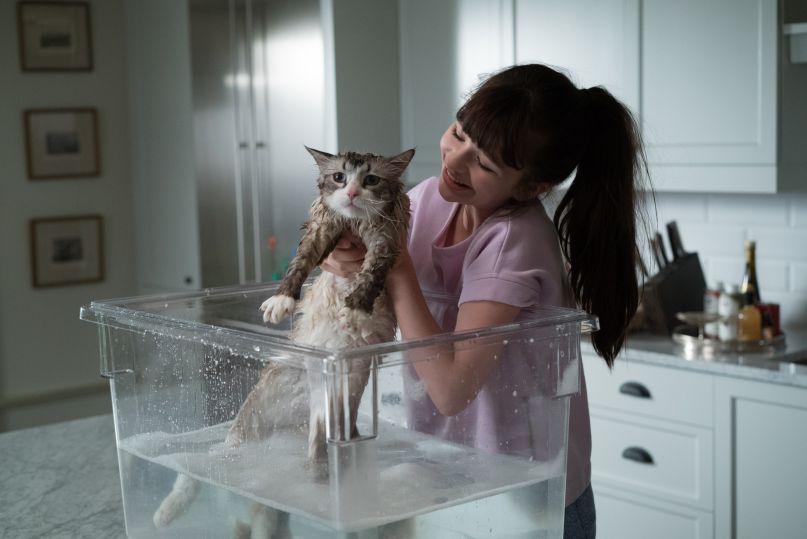 Yes, this is the movie about Kevin Spacey being turned into a talking cat.

Yes, this movie is fur real.

Yes, Nine Lives totally deserves to be put down.

Nine Lives is far from a fancy feast for the whole family, but it’s a comedy of very familiar breeding. It wishes it was a lessons-learned folly like Click or Liar Liar. Yet the film’s a big, hairball, a knotty farce of family melodrama and careless whisker jokes. Strangely quiet and almost completely unfunny, Nine Lives never roars, but instead purrs along lazily. But where to even begin? Let’s shed some light on this doomed cult classic of the future.

Meet the frisky millionaire Tom Brand (Spacey). This businessman has some claws: he’s built up sports, air, and retail empires under his Firebrand moniker, keeping his paws in all aspects of his companies. Lately, he’s been positively feral over a skyscraper project in mid-Manhattan. It’s his dream to have the tallest building in the world, and he will do whatever it takes to scratch his way to the very top. But not everyone’s feline groovy in Tom’s life. Tom smells something fishy when he comes across Ian (Mark Consuelos), a ladder-climbing executive. His second wife Lara (Jennifer Garner) growls at Tom for missing events like birthdays and dinners. Tom’s son David (Robbie Amell) tails his negligent father at work, only to be mocked and neutered for “not being a man” by his father. And Tom’s daughter Rebecca (Malina Weissman) just wants a damn cat for her birthday.

But when a nutty shop owner (Christopher Walken) turns Tom into a cat named “Mr. Fuzzypants,” Nine Lives mostly litters the predictable redemptive journey for Spacey’s tomcat with poop and piss goofs. Tom has all the thoughtful sass of a YouTube comment, staring down the camera several times to moan, “seriously?” He laps scotch from an ashtray one second, urinates in a purse the next, turns into a CGI sight gag for pratfalls in another, then guardian-angels his kids before a manipulative climax that will leave even the most patient viewer feeling catty. In short, everything’s terrible and nothing’s fun in Nine Lives; at 87 minutes, at least it’s a mercy killing for the talent involved.

In fairness, there is one mild stroke of inspiration here: the casting of Walken as a self-proclaimed cat whisperer, Mr. Perkins, the magical proprietor of a pet shop called “Purr-Kins.” Walken does that thing where he shows up in tiny moments, marking his territory through sheer eccentricity, and when Spacey’s away, Walken does play. Listening to him enunciate awkwardly, in that wonderful Walken way, is hair-raising stuff even if he gets a cumulative four minutes of screen time. The man always has a cool purrsona about him, and his scenes offer Nine Lives’ best life. He’s certainly above the caterwauling female character stereotypes. Or the jokes about prissy New York wealth. Or the general sense that the film is sucking the air out of everything around it like a cat in the night.

Everyone involved in Nine Lives looks like they’re trying to sweeten the collective kitty without really trying. Former comic lion Barry Sonnenfeld (Men in Black and The Addams Family) plays the jokes sloppy and quick. Garner strays from grace and even dignity while herding around her husband and getting bonked on the head. Most parties involved look like they’re taking a catnap as Europa, the film’s production company, surrounds the cast with Lexus cars, Nespresso capsules, and other brand-name treats that one might guess everyone took home after Sonnenfeld yelled “cut.”

If you’re looking for a grand metaphor for Nine Lives, it comes early on. During a chat about charity, Brand the sourpuss hisses into his phone, “I really don’t care.” No kitten. It takes on a deeper meaning within Nine Lives. And the cat’s out of the bag the second Spacey appears on screen (against obvious green screens, even in scenes where they don’t belong) and gets right into mugging, pouting, and screeching. Meow is the winter of Spacey’s discontent, and perhaps it was only the promise of golden yarn that led him to Nine Lives.