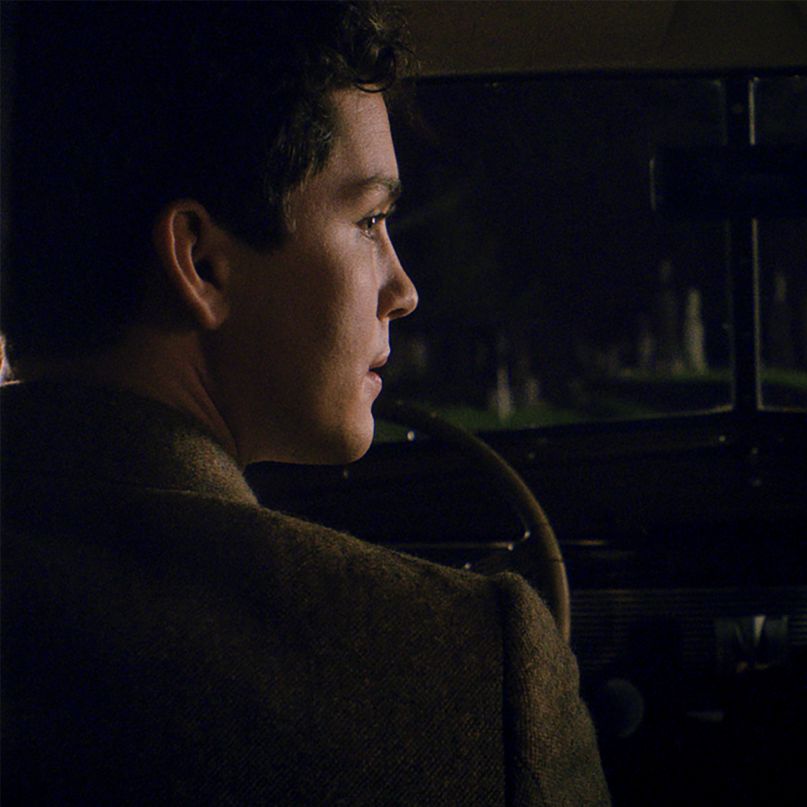 The following review was originally published as part of our Sundance Film Festival 2016 coverage.

Indignation concerns itself with a number of quintessentially Philip Roth topics: Judaism, sexual repression, older forms of Americana, atheism. All of these are filtered through the story of Marcus Messner (Logan Lerman), a young college student in 1955 America who discovers firsthand, the hard way, just how difficult it was to assert one’s individuality in virtually any way in the post-WWII/Korean War era. He leaves his family’s butcher shop in New Jersey to attend Winesburg College, a prestigious and (crucially) Catholic institution in central Ohio, where he aspires to study law while keeping his head down and declaring as few affiliations as possible with anybody around him. Especially the Jewish fraternity that his father aggressively insists he join.

Marcus is the kind of young man who cares little for the assigned restrictions of a dominant mainstream society, which in this case was one waging war against everything from draft dodgers to the sexually promiscuous to the dreaded “socialists.” James Schamus, in his directorial debut, frames Indignation’s vision of America as a place where the only options were assimilation, quiet repression, or an early death perceived by many as just. It’s a rather blunt-faced way of approaching the era, but it’s nevertheless passionate in its fervor, and it’s that passion that elevates Indignation above its occasional histrionics to moments of truly inspired drama.

Once arrived, Marcus is forced to discover just how different he is and how little of the world he truly knows. These lessons chiefly come from two diametrically opposed sources. On one end, there’s Olivia Hutton (Sarah Gadon, who appears to have been plucked right from the film’s era). Olivia is everything Marcus is ill-equipped to deal with: furiously intelligent, sexually experienced, and struggling to deal with her own demons. On the other is Dean Caudwell (Tracy Letts), who delivers many of the campus’ required chapel addresses and is struck with curiosity about why Marcus feels himself such an ill fit for his assigned fellow Jewish roommates, especially if (as Marcus insists) he’s a reasonable type willing to compromise with his fellow students.

Compromise, in all its forms, is central to Indignation. Schamus, who also adapted Roth’s novel, finds one dramatic irony after the next in the many compromises Marcus has to make, to say nothing of those that Olivia already has long before the film picks up with their stories. Most exhilarating is the film’s central setpiece, which doubles as a thesis statement, in the form of a lengthy dialogue between Marcus and Caudwell when Marcus requests a room change and is accordingly required to speak with the Dean about why. Over nearly 20 minutes, Schamus simply lingers on a conversation, as Dean Caudwell wears Marcus down to honest answers about his contempt for the chapel requirement on moral grounds, and Marcus works himself into a fit of escalating apoplexy over the Dean’s unflappable manner. It’s a superb bit of performance, particularly on Lerman’s part, as he more than holds his own with Letts, who takes clear pleasure in sinking his teeth into such rich material. And it’s a distilled version of Indignation’s larger ideals; for Marcus there is no equivocation when it comes to his beliefs, not when it’s demanded of him and not even when some hills might not be particularly worth dying upon.

It’s the central trio of performances that benefit Indignation most when the adaptation finds itself on shakier ground. While the film retains the novel’s time-jumping maneuvers and unreliable narration, Indignation sometimes feels as though it’s missing long chunks of necessary story. Character motivations shift incongruously in single scenes, and the sequences involving Olivia and Marcus that bookend the story feel especially digressive, as though the film is chasing a grander statement about the nature of fateful tragedy without being bothered to show the work beforehand. This same feeling of sudden progression extends to a late conversation between Marcus and his mother, in which Marcus is asked to make a terrible decision for scurrilous reasons, solely for her benefit even as she thinks it for his. The scene aims for tragic impact, and instead plays as forced.

And yet, Indignation resonates with the tension of things said and unsaid, regretted and forgotten. Everybody within its universe has their reservations and their scapegoats, and in general, a thick fog of wartime paranoia hangs heavy over the film’s seemingly innocuous events. Marcus’ mother insists that “weak people are not harmless,” and this notion of weakness and moral frailty as the worst sin that can be committed makes it fairly easy to see why Marcus can barely contain himself within this world or why Olivia seeks so many different means of escaping it. Indignation recalls a crueler time in history, in a manner that offers a strong reminder that melodrama, when executed so well and acted to the nines as this is, isn’t always a profanity as it’s so often treated. Sometimes the most amplified emotions are the only ones that can speak to a world in such turmoil.