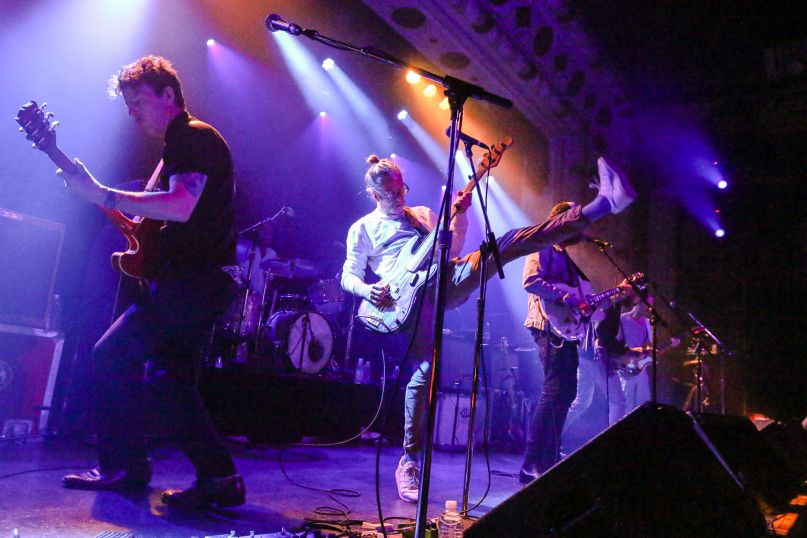 When Broken Social Scene announced their indefinite hiatus in 2011, fans were disheartened. The band showed tremendous talent and effort over a decade into their career, at the time fresh off the release of Forgiveness Rock Record, and their tour the year prior showed they had yet to see a decline in the quality of their live performances. And so their headlining show at The Metro in Chicago marked multiple events. First, of course, the band’s first US show in five years, but also their refusal to give up, their refusal to cash in for money’s sake, their refusal to half-ass anything.

From the moment they opened with “I’m Still Your Fag”, Broken Social Scene held the stage with equal confidence and coolness, singing about a devoted relationship as if reminding fans that Broken Social Scene, even 15 years later, will always be there for them.

Close to the start of the evening, Kevin Drew took a moment to thank Brendan Canning for keeping them all together, suggesting that the band is, unsurprisingly, hard to rope together now that most have children to take care of. To honor him, they performed his new solo single, “Book It to Fresno”, but Broken Social Scene avoided making it feel like a press release. It’s a genuine romp in support of a dear friend, the type of performance that speaks to their closeness as musicians, friends, and practically family.

The whole evening could be summed up as such. Here’s a band so in tune with its members that each song, popular or old, comes across like it was written a week ago, bleeding with raw excitement. Over 10 members stood onstage, rotating instruments and places, twirling around one another like kids in a living room. Be it the horn players or the rhythm section, each member of Broken Social Scene played their part entirely in tune with one another, bobbing in sync in a way that quickly bats away the idea that they were wrangled together. There’s a magical energy pulsing during Broken Social Scene sets, and their return to America saw them raising their own bar repeatedly.

Even without original female vocalists Feist and Emily Haines delivering older hits, Broken Social Scene kept their sound alive, and at times arguably more energetic and soothing than on record. Amy Millan of Stars was the spotlight of the show, bringing charm and spice to the set that varied the delivery of cuts like “Forced to Love” and “Handjobs for the Holidays”.

New singer Ariel Engle made her debut with the band on the Metro stage and she upheld her end well. Taking on most of the female vocal lines, she showcased a hearty tone, balancing thick notes with a delivery that kept things soft. Fittingly enough, her voice is most comparable to Feist. It’s a promising sound to hear, especially since Broken Social Scene are currently working on their first new record in six years, and one that solidified its place in the band’s sound when she sang “Gonna Get Better”, a new song that saw most of the band whittling their way through melodic guitar lines that took a back seat to Engle’s lines.

Despite all of this, the crowd never seemed truly smitten. There were few sing-alongs, few hands in the air, few grins of bliss. There was applause, but no mirror image of the energy each member was hashing out onstage. Perhaps the Chicago fans needed an opener to warm them up. Luckily, Broken Social Scene knew how to get things going. By starting with their most energetic numbers (“Ibi Dreams of Pavement (A Better Day)”, “Cause=Time”, “7/4 (Shoreline)”), they did their best to sweep away initial stiffness so that by the time Drew climbed into the crowd for “Sweetest Kill”, people were ready to sing along. He ushered those around him to get closer, encouraging them to join in the song’s slow croon, ending the whole number with a group hug on the floor. Broken Social Scene are one of the few acts who can utilize a slow song – specifically one that isn’t their biggest hit — to rally an audience, motivating them to get loose for whatever followed.

And that they did. Surprisingly, the band launched into “Late Nineties Bedroom Rock for the Missionaries” and then immediately into “Shampoo Suicide”, bringing their groovier, more percussive side to life. Songs off You Forgot in People filled the room with thundering volume, the latter exploding at the end as the audience shared a moment of surprise and jubilation. Even the layered calls of “Superconnected”, a song often labelled as filler, upped engagement.

With two minutes until the Metro’s curfew, Broken Social Scene hastily returned to the stage. “Should we play one more? We have to get off at 10:30,” Drew said with absolute severity, not looking for the enthusiastic cheers the audience would inevitably give. “I don’t know where Brendan is, so we’re going to play this without bass. He’s probably swimming or something.” And like that, they launched into the fast version of “Major Label Debut”, guitars swinging, smiles spread across their faces, Canning soon darting onstage to join.

Broken Social Scene are a band so on point that they can tease one another without ever breaking the family dynamic or lessening their insurmountable energy. Their Metro show served as a welcome return, somehow capturing the purity and authenticity that the band held 10 years ago, as if nothing changed. Maybe nothing has. Their lineup may rotate and the setlist too, but Broken Social Scene maintain their iconic status not just because of their incredible discography, but because they embody the spirit, warmth, and love any music scene should have — and they gift all of that to the audience whenever they wave farewell.