A broad, formulaic sequel that only reminds you how good the original was 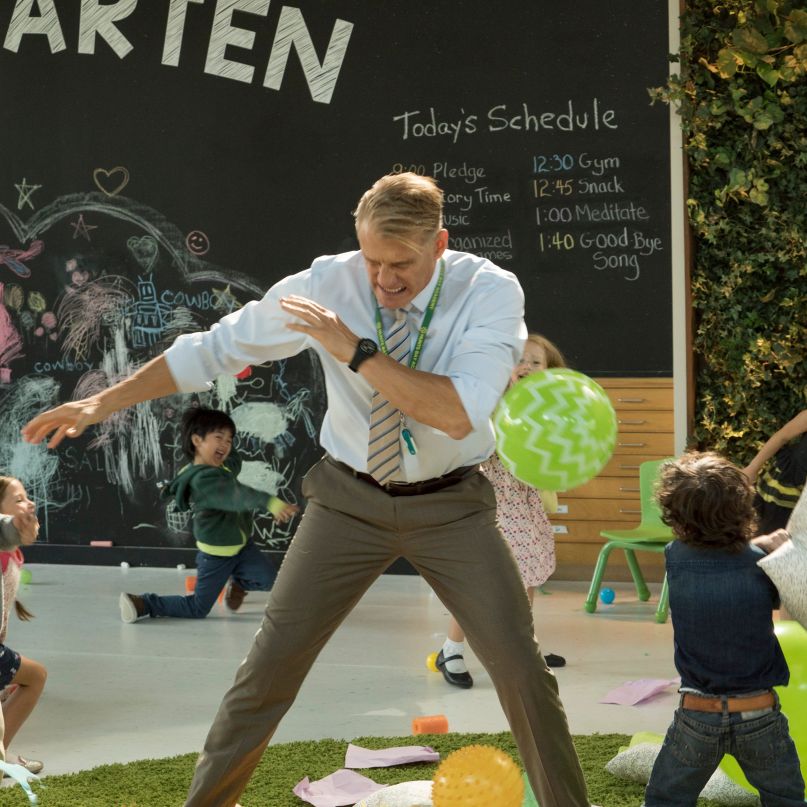 For all of its innate kitsch and gimmickry, Ivan Reitman’s Kindergarten Cop, the story of a gritty cop who goes undercover as a kindergarten teacher, works to this day as both a fish-out-of-water comedy and a pulse-pounding action flick. Credit whoever you like for its success: Reitman deftly balanced the opposing tones, star Arnold Schwarzenegger infused his cyborgian superman with genuine vulnerability, and composer Randy Edelman’s score helped convey a concrete sense of place. Yes, movies of its ilk live and die by the handling of their gimmicks, but Kindergarten Cop, while no Oscar contender, proves that the formula can be massaged into something eminently enjoyable. It can also, unfortunately, be Kindergarten Cop 2, a broad and ultimately pointless exercise that seems to exist solely to remind audiences of how surprisingly good the original was.

There’s a few fun touches; the film lightheartedly satirizes PC culture by casting the school as a haven of liberal progressiveness — at a date auction, for example, all genders are encouraged to bid on the suitor, whether they’re straight or not. Kindergarten Cop 2 isn’t all that funny, but these jokes land the best, if only because it’s clear everyone’s heart is in the right place. Otherwise, any big deviances from the original are purely cosmetic. The MacGuffin, for example, is a flash drive rather than an actual kid.

And it’s changes like that, honestly, that make Kindergarten Cop 2 pale in comparison to its source material. Because Schwarzenegger’s John Kimble was in pursuit of a particular child, he had to get emotionally invested in each of them. This resulted in some touching encounters that helped reveal the character’s fractured relationship with his own son. In this film, the kids, ostensibly the raison d’etre, are essentially there to spew some cuteness. Unlike Kimble, who went from stoic to softie with the help of the kids, Reed has no discernable arc. Sure, the kids are cute, but they’re not characters so much as set dressing. Both the kids and the school setting are ultimately inessential to the story being told, none of which seems all that concerned with Reed’s growth as a person.

Reed’s lack of character can likely be attributed to the stakes, which are established but never interwoven into his journey. The flash drive contains confidential info about people in witness protection programs; the bad guys, a group of cartoonish Albanian gangsters who never come close to achieving the slimy menace of the original film’s Cullen Crisp, want the flash drive so they can track down the woman who’s going to testify against them. That woman, as established in the film’s prologue, is Reed’s former lover, whom he developed true feelings for while undercover. It’s a wonder, then, that this wrinkle is completely ignored as the story progresses and Reed casually pursues a relationship with Olivia (Darla Taylor), a fellow teacher.

Regardless of this narrative curiosity, the relationship between Reed and Olivia results in some of the film’s best scenes (though there is a queasiness to the fact that, in real life, Lundgren’s old enough to be Taylor’s grandfather). There’s a sweet chemistry between the two, and a scene at a local honky tonk is charming in its breeziness. That’s a relief, too, because Lundgren otherwise flounders as a comedic lead. He’s clearly having a great time subverting his reputation as a steely badass, but his strengths as an actor simply don’t lend themselves to the script’s tired jokes and opportunities for physical comedy. And maybe that’s a good thing — this is a film, after all, where a character is tased in the balls before shitting his pants. Lundgren’s a Fulbright Scholar, for god’s sake.

It’s refreshing to see any film try to combine action and comedy in a way that’s family friendly, so it’s a shame that Kindergarten Cop 2 ultimately resonates as nothing more than a sub-par rendition of its predecessor. The script is bad, the direction is uninspired, the villain is boring, and Lundgren, despite his strengths, just can’t navigate that space between comedy and action like Arnie can. You do, however, get to see Lundgren speak to a pig. “Hey, come on, pig,” he says. “I’m telling you: I don’t need therapy!” Trust me, it’s better without context.