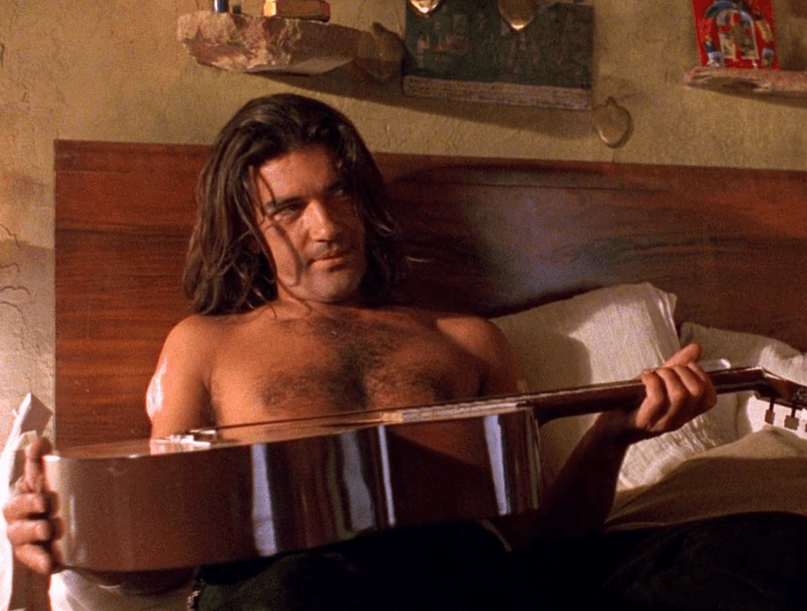 We’re used to seeing Antonio Banderas with a guitar. After all, that’s how the Spanish hunk made a name for himself in Robert Rodriguez’s Mexico trilogy (or Mariachi trilogy).

Well, he’s back behind the six-string, only now he’s an old recovering sex addict named Turk Henry, who chases down pirates to find his supermodel wife. At least that’s the story behind Con Air director Simon West’s action-comedy, Salty.

From the author of Moist and Delicious comes a raucous comic novel where anything goes. Turk Henry, an overweight, unemployed rock star married to a supermodel, has discovered that Thailand is probably the last place a recovering sex addict should go on vacation, yet here he is, surrounded by topless groupies and haunted by the stares of hundreds of luscious bar girls. Turk’s struggles with monogamy, however, pale beside a greater challenge when his wife is abducted by a group of renegade, shipless Thai pirates.

Hmm, sounds a little like Six Days, Seven Nights meets This Must Be the Place — not too shabby. Banderas should also have a blast shooting this sucker, as he already admitted: “Finally three of my passions together, cinema, music and humor.”

As The Hollywood Reporter notes, the film broke U.K. records by becoming the “largest equity crowdfunded film of all time, inviting members of the British public to own a stake in the film’s profits.” Currently, the London-based Carnaby is shopping the film around … you guessed it, Cannes!

Shooting will begin down in Chile next month.