Dusting 'Em Off
Revisiting an album, a film, or an event on its anniversary

Spotlight’s granddaddy was the perfect representation of journalism in cinema 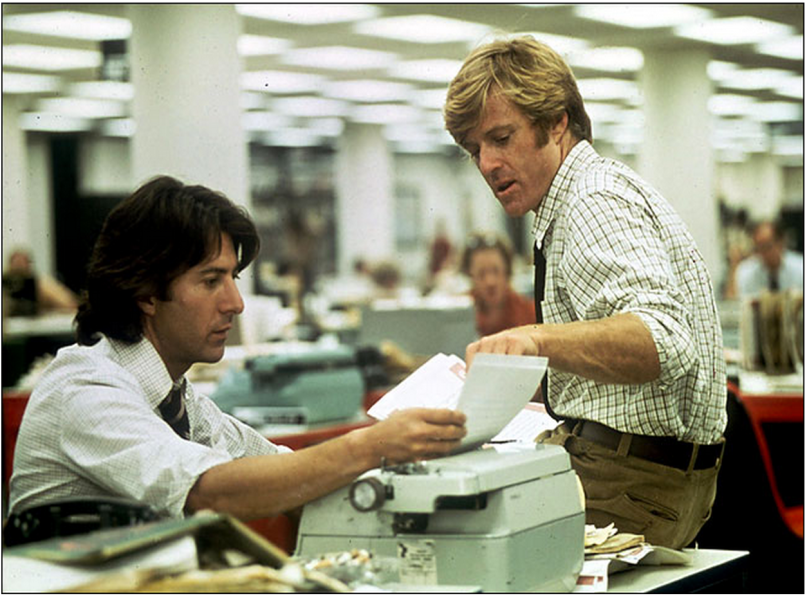 After last year’s critically acclaimed (and Best Picture Oscar-winning) Spotlight, it’s never been a better time to be a journalist in cinema. That having been said, Tom McCarthy’s enthralling throwback to the days of old-fashioned paper-chasing owes quite a lot to Alan J. Pakula’s 1976 Watergate thriller, All the President’s Men. The granddaddy of all journalism pictures turns 40 this week; looking back on it now, All the President’s Men continues to make a case for the inherently cinematic nature of journalism, while also showcasing why films like it may never come along again.

In many ways, All the President’s Men is the ur-text for cinematic journalism, the yardstick by which all films of its genre are measured. Every single trope is there, from the all-white offices to the abrasive repartee between eager reporters and pragmatic editors. Without All the President’s Men, we would lack such cultural touchstones as the phrase “follow the money” and the cloaked silhouette of an anonymous informant in a parking garage. Thanks to this film, the American people have an innately romantic image of principled journalists as crusaders for truth and justice (or even just a hot story), huddled over typewriters and finding clever ways to skirt the “non-denial denials” of their quarry. It makes sense; the real Woodward and Bernstein story stands as the glimmering ideal of the fourth estate’s power over American culture, and their depiction in this film supports that assertion.

Films about reporters are only as compelling as the reporters themselves. Luckily, All the President’s Men offers one of the greatest cinematic partnerships of the 1970s in Robert Redford’s Bob Woodward and Dustin Hoffman’s Carl Bernstein. While both characters have the same basic skill set and dogged determination to crack the Watergate story, their reluctance to partner with each other sets up easily-identifiable dynamics: Woodward is the principled new guy with stoic determination and a mysterious source (Hal Holbrook’s iconic Deep Throat), while Bernstein is arrogant, brash and full of defiant fuck-the-man energy. Redford makes for the perfect straight man to Hoffman’s intensity and idiosyncracies, the two constantly recalibrating themselves and their personalities, shifting tactics and bouncing off each other’s ideas with impeccable chemistry. Independent of the film’s dedication to its central investigation, All the President’s Men also shows a friendship being forged in the fires of journalism.

At first glance, All the President’s Men is nothing special from a filmic perspective – it’s all just guys wearing ties and answering the phone ad nauseam. But if you read between the lines, Pakula’s incredible, almost stately filmmaking style evokes the kind of paranoia that fuels Woodstein’s investigation of the Watergate scandal. Chief among these is the depiction of the Washington Post offices, an absolute hum of activity that Pakula never lets out of the audience’s sight. In one scene, a split diopter shot captures a tense phone call between Woodward in the foreground, while the rest of the office gathers around a piece of unrelated news in the background. Scenes of the reporters huddled around paperwork in the Library of Congress, or running down names while driving through the streets of DC, are filmed from wide, high-angle shots that emphasize the characters’ small stature and insignificance against the whole of the city and the government they hope to expose. While Watergate is the film’s sole focus, Pakula never fails to remind you that Woodward and Bernstein are just two guys working on a story, while the rest of the world spins along without them.

All the President’s Men becomes an innately tactile film, of a kind you seldom see in movies about modern journalism. Phones, notepads, and typewriters become the weapons Woodward and Bernstein use to attack and conquer the labyrinthine puzzle set before them. Pakula agonizes over these material objects in a way that makes them a fundamental part of the characters themselves. Woodward and Bernstein communicate through notepads and typewriters, reacting to bizarre contradictions over the phone by just writing it down, as if doing so wills their suppositions into existence. It’s very telling that the film is bookended with the sight of ink hitting paper on a typewriter in extreme close-up: the power of words and the people who write them are vital to the fabric of All the President’s Men.

Today’s perception of journalism is a far cry from the kind of frantic immediacy and eagle-eyed integrity that is depicted in All the President’s Men. It’s extremely telling that most modern films about the process of news media are period pictures, from Spotlight to Zodiac. After all, All the President’s Men was a 1976 adaptation of a 1974 book of a 1972 investigation; journalism still more or less looked the way it did then. People actually turned up at strangers’ doorsteps at all hours of the night to confirm stories, and journalists were held more closely accountable for purveying false information. If anything, the film’s mild criticisms about Woodstein’s loose relationship with journalistic ethics feels cute by today’s standards: it’s doubtful Deep Throat would criticize ’70s print media’s “inexactitude and shallowness” if he could spend five minutes on Gawker or BuzzFeed.

As the Internet continues to kill print media and the increased democratization of the media gives anyone with Google, a keyboard, and an opinion a major voice in American journalistic discourse, it becomes ever clearer that we will not getsee a film like Alan J. Pakula’s seminal political thriller anytime soon. However, if we eventually see a contemporary, vibrant, and engrossing film about the power of modern 21st century journalists who manage to avoid listicle duty and crack a major news story in a tactile and dramatic way, perhaps All the President’s Men can draw the modern parallel for which we are long overdue.