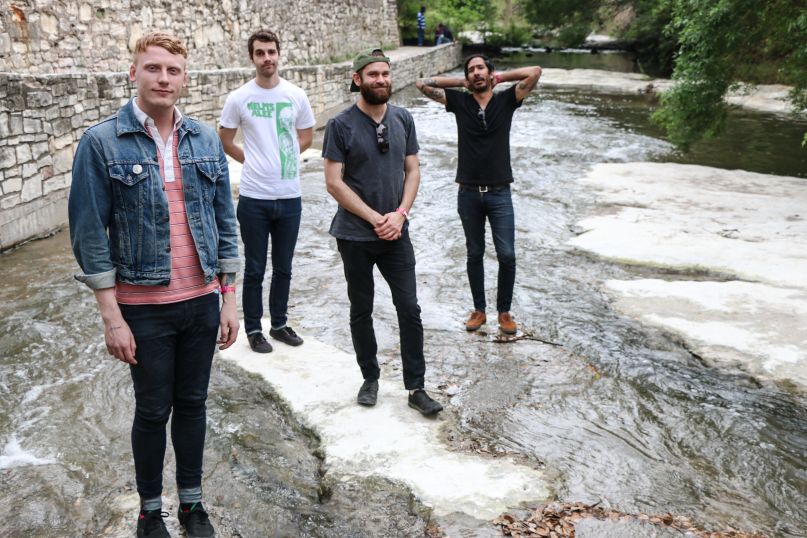 There’s more to being a noise band than being loud. For Toronto quartet Greys, upping the standards for noise rock was a natural step on their sophomore LP, Outer Heaven. Sure, they’re chaotic and energetic and technically loud live. While they’re no METZ or Big Black — nor are they Jon Brion’s old ’90s band, the Grays — the four-piece go hard when they want to and lean back on experimental touches when you’re least expecting it. They’re in the process of redefining themselves, and they’re redefining the genre in the process.

Vocalist-guitarist Shehzaad Jiwani, guitarist Cam Graham, drummer Braeden Craig, and bassist Colin Gillespie are sitting around a cobblestone footbridge above one of Austin’s many random streams, a place that at first seems comically quiet for a band of their genre to be talking, but as time passes, its subtleties seem to mirror theirs. “It’s not the end goal to be a heavy band,” Jiwani says of Greys. “It’s to use these tools as a loud, noisy band to accomplish the opposite thing. We’ve figured out how to make the noise more melodic and make the melodies more dissonant.”

In that, Greys have come a long way. Their debut full-length, 2014’s If Anything, took the genre at face value and ran straight into restless noise rock. Now that all four members contribute ideas as well as incorporate sounds they’re currently listening to, they’re claiming a dynamic that’s distinctly their own. “The Repulsion EP sort of feels like a first record,” says Jiwani. “I think we did figure out what we wanted to sound like on the first full-length, but we figured it out too much. It feels like the new record is sort of on rails in a way I’m still proud of.” The band nods in agreement. “I think now we all feel more creatively fulfilled,” says Gillespie.

Of course they do. On Outer Heaven, Greys twist and challenge noise rock in ways that make it glow with new hues. It bursts with melody on songs like “If It’s All the Same to You” and groans with weary seasickness on “Sorcerer”. Before now, the band showed their influences via unusual (see: unexpectedly kick-ass) covers like Stereolab. Now it’s all out there in the open. “If we gave you a star map, you could kind of connect the dots a little bit, but I don’t think you could ever say we sound like Scott Walker or Nick Cave or Brian Eno or shit like that,” says Jiwani. “There’s a guitar part on the record to me that is so Velvet Underground, Brian Eno, late-‘70s David Bowie, but I don’t think anybody would pick that out.”

But, in fact, you can — just as long as you’re listening. Greys have a knack for going deeper than Sonic Youth weirdness. They channel drum sound production from records by Ice Cube and the Chemical Brothers. There are less guitar tracks. There are less overdubs. There are no plug-ins. Instead, they made an atmospheric record that allows itself to pummel listeners live later. “On the first record, we were really trying to dial in what it sounded like to be four guys in a room making a lot of noise, and we did that; we could never make another record that captures that as clearly as that did at that time,” says Jiwani. “We tried to embrace the idea of being a very studio-oriented band — which is funny, because there’s less going on on this than the first record.”

Yet they don’t sacrifice their original sound. Greys pair punchy numbers like two minutes of unforgiving clamor on “In for a Penny” with the slow trudge of “Strange World” immediately after it. “It’s got this vibe that’s really rough and tumble because we don’t know what we’re doing, and we don’t really want to know because then it sounds too much like a particular thing,” says Jiwani. “A lot of it, it’s not even riffs at all. It’s just actual feedback and noise that we’re making melodic.” When it’s noisy, it sounds like Girl Band brawling with Cloud Nothings. When it scales back, it goes for subtle oddities. “This record is the first time we’ve slowed down drums,” says Craig. “Usually, it’s pretty straightforward and lots of fast fills, but this record got to chill.”

At home, Gillespie worked on reel-to-reels and tape loops, bringing his love for experimental music to their sound directly. “I really enjoyed the physicality of just cutting and pasting it together and how it reacts when you pull it,” he recalls. “I think I had as much fun doing that as playing bass on the record. I’d record stuff on phones and then cut it through to analog tape, and depending on how I did it, it would either be reversed or backward. It was all very reactive and improvisatory in that sense.”

Luckily for them, they recorded at Hotel2Tango, one of Montreal’s most notable and stacked recording studios. From a distance, they went into a studio that they’d never been to in a city they didn’t feel that comfortable with working with a guy they never worked with before, but producer Howard Billeman let them do their own thing. When they realized knowing each other well allowed them to make the best of it, they did that — and then some. The four took time off to stay in a Montreal Airbnb. It wasn’t as comfortable as if they stayed in Toronto, but it pushed them past the lax vibes they would have embodied otherwise. “We lived and cooked and slept on the floor,” says Gillespie. “It just kind of had the same vibe as if we were touring, where we spend 95 percent of the time together.”

Not only were Juno 16s and an Arp Selena string machine at the studio, but longtime collaborator Mike Rocha encouraged them to try new recording methods. He played piano or organ chords for the band to record through iPhone memo, pop it on tape, and plug it in. He pushed for more distortion, for louder feedback. “I’ve never heard someone put their ear up so fearlessly to a guitar amp and be like, ‘Alright, crank it,’” says Jiwani. “It was almost like we were making two records at the same time.”

Over the course of the interview, Greys make no effort to withhold jokes. They tease one another, drop inside jokes, and erupt into unified laughter more than once. It’s the type of bond that comes from knowing each other when younger. After attending the same high school, Graham begged Jiwani to let him into the band. “He asked me if I knew any drummers, I said I’d drum for him, and he just asked again,” laughs Graham. “I guess they found no one so they settled on me.” After Gillespie purchased David Byrne and Brian Eno records at the record store Jiwani worked at, he was asked to be in a band. All four members committed to the band shortly after while still in their early 20s. Five years have passed, but their lighthearted attitudes and penchant for fun clearly never faded. It’s impossible to miss. “One of the producers we worked with said he’s never seen a band laugh so much in a studio,” says Craig. “I’d be lying if I said I wasn’t proud.”

Despite that, Outer Heaven isn’t afraid to dive into topics far darker than their close-knit relationship suggests. In the wake of the Paris attacks, Jiwani penned the record’s propulsive single, “No Star”. Greys heard the news moments before taking the stage in Minneapolis. “It’s not just what happened — it’s what happened after: reading about it and hearing people’s completely different reactions to it,” he says. “To read people’s reactions that are so hateful, towards someone who looks like me for no reason, and then people trying to explain to those people but not taking into consideration how other people feel. It’s such a sensitive and multi-layered topic. I was talking to my mom like, ‘I don’t understand this, and who can I talk to? I don’t really identify with Indian people, and I don’t really identify with white people.’ It’s not so much I feel sorry for you, or I’m with you. What people need to hear more is I’m listening to you, and I want to hear how you feel about it because I want you to explain it in your own words.” After sitting in the van feeling like the world would end, he began wondering what it would have been like had it taken place in Toronto. “These lyrics are outwardly focused as opposed to what’s in my head, and that really knocked the door down for me, like I can talk about this stuff. I’m allowed to talk about this stuff.”

As friends who can record quickly, Greys unintentionally build a sound free of judgement. “The band has always since the very beginning been an exercise in reconciling noise with melody,” says Jiwani. “We’d never used drum machines, and it took us out of our comfort zone. ‘Blown Out’ and ‘My Life as a Cloud’ were really experimental for us then, but because of the experiences we’ve had playing together, we told ourselves we know how to do it, we know how to exist as a band, and we got through it.”

If you haven’t gathered, Greys don’t care what you think – a state of mind that’s always easier to say than it is to actually embody. “When we wrote that first record, we wrote it feeling like we were going to have to shop it to labels, tour forever, and put our best foot forward, but this one it was like, ‘Who gives a shit?’ We can only satisfy ourselves,” says Jiwani. “This is who we are, these are the songs we want to play, and we like ambient drones and tape drums even if that’s pretentious or not pretentious enough. We didn’t even send it to the label. We didn’t have anything to prove to anyone but ourselves, and we did that — and we did it in under 40 minutes.”

Contentedness is difficult to come across in music, especially in a noise-dominated genre. Greys happened to do so both on record and off. The best part? You’ll probably care a lot about it, too.