A Quick History of the First-Person Film

Hardcore Henry isn't the first movie to assume the first person, but it's a big step 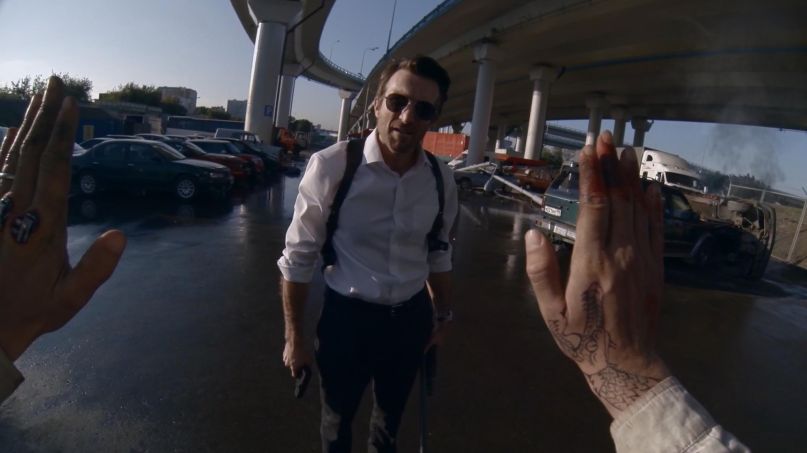 “Mysteriously starring Robert Montgomery … and you!”

That was the tagline for 1947’s Lady in the Lake, a Raymond Chandler adaptation that promised a groundbreaking innovation in cinematic technique. To bring Chandler’s Philip Marlowe to the screen, Montgomery — who pulled double duty in the director’s chair — chose to shoot the film from the detective’s perspective. If Chandler’s trademark narration helped readers see what the underbelly of America looked like through its gumshoe’s eyes, Montgomery’s goal was to literally place the viewer inside his head.

Lady in the Lake, however, struggled with how to translate its ambition into a visual language that makes sense on film. During a confrontation between Marlowe and Adrienne Fromsett (Audrey Totter), a femme fatale who hires the detective to track down her boss’ missing wife, Totter comes off as less dangerous than pained. Totter, a noir veteran, was clearly uncomfortable with being forced to direct her performance into the camera, which breaks nearly every rule of film acting. Montgomery has even less of a clue what to do with Marlowe himself, who appears in the background of the scene, as glimpsed in the reflection of a mirror. If the camera is intended to represent what Marlowe is seeing, how is this possible?

The elusive sword at which Lady in the Lake grasped would later become known as the POV film, in which the action is viewed entirely through the protagonist’s perspective. Films commonly utilize subjective camera as a tool of radical, if temporary, empathy. In Being John Malkovich, the viewer inhabits the famed actor’s body along with Lotte (Cameron Diaz), Craig (John Cusack), and Maxine (Catherine Keener) in order to experience the thrill of being someone else for a while. Hardcore Henry, which debuts in theaters this week, promises to push those boundaries even further: Rather than being dumped onto the side of the Jersey Turnpike, viewers are stuck in its title character’s body for 90 minutes.

Why is it so difficult to make a successful first-person film? In an essay for Film School Rejects, Christopher Campbell suggests it’s due to the fundamental misunderstanding of what such filmmaking even signifies. In literature, first-person narration is when the protagonist speaks as themselves. Thus, a subjective perspective in cinema isn’t first-person at all. Instead, the POV film would be best defined as “second-person cinema,” akin to the use of “you” to convey subjective perspective in literature. Although Campbell compares it to Choose Your Own Adventure novels, it recalls Italo Calvino’s If on a winter’s night a traveler, which alternates between second- and third-person narration.

Dark Passage, which debuted the same year as Lady in the Lake, likewise begins in medias res. Vincent Parry (Humphrey Bogart) has just escaped from San Quentin, sentenced to life in prison after being falsely accused of killing his wife. He’s on the run when he’s picked up by Irene Jansen (Lauren Bacall), a makeshift getaway driver who appears to know more than she’s letting on. In these early scenes, the use of subjective camera is key: Vincent plans to have plastic surgery to assume a new identity, and the camera coyly hides the reveal of his new face. The device is abandoned when he meets Dr. Walter Coley (Houseley Stevenson), who reluctantly agrees to aid in his transformation.

But if the narrative technique was poorly received by both critics and audiences, it had less to do with viewers’ distaste for innovation than the film’s lack of consistency. As film writer Kate Bellmore explains, the film only employs the second-person about half of the time. For example, consider when Irene and Vincent first meet. “Jansen [picks] Parry up off the side of the road just after his escape and is driving him to her apartment where he will be safe from police capture,” Bellmore writes. “Parry hides in the back of Jansen’s car under a tarp so he won’t be seen. Instead of remaining true to the … technique, the camera takes shots of the bridge, the car as it proceeds over it, and Jansen driving.”

Russian Ark, the 2002 one-shot film set in the Hermitage Museum, presents a similar contradiction: The action is seen through the perspective a ghost watching history unfold before him. Often the mise en scene appears to be reflective of his own viewpoint, but at other times the camera depicts another perspective altogether. Is the ghost himself being haunted? Movies like The Diving Bell and the Butterfly and Enter the Void resolve that tension — and the need to represent a narrative world to which the protagonist isn’t privy — by using the second-person sparingly. In Diving Bell, Jean-Dominique Bauby’s (Mathieu Amalric) sessions with his physical therapist are punctuated by vivid fantasies. He is suffering from locked-in syndrome, and the intermittent use of POV highlights the claustrophobia of being trapped in an immovable body.

The trend of found footage films like The Blair Witch Project, Cloverfield, and Chronicle has placed the burden of perspective on the camera itself, held by a mostly unseen protagonist. This allows filmmakers to play with subjectivity while not being wholly bound to it; in Cloverfield, the camera can be just as easily handed off to another character, should the filmmaker behind it, Hud (T.J. Miller), need to appear onscreen momentarily. Characters may also put the camera down or drop it for purposes of narrative convenience. In Blair Witch, the action concludes offscreen, after the camera is abandoned in a state of panic. The viewer is meant to interpret the eerie implications of the characters’ absence.

Hardcore Henry, however, offers a new take on POV through the evolution of film technology. If Campbell argues that subjective films ask cinema to do something it cannot — take place at the level of the “I” — Russian director Ilya Naishuller and his team used GoPros to come as close to that experience as possible. Naishuller first developed the concept when filming a pair of music videos for his punk band, Biting Elbows. “The Stampede” and “Bad Motherfucker” more or less parallel the concept of Hardcore Henry: violent mayhem that unfolds as if the viewer was taking part in a “first-person shooter” game. The latter video has over 32 million views on YouTube, earning kudos from directors Darren Aronofsky and Timur Bekmambetov.

Bekmambetov (Wanted, Day Watch) urged Naishuller to make the concept into a full-length film. Bekmambetov had recently served as the executive producer of Unfriended, a horror film that takes place entirely on a laptop, and thought Hardcore Henry represented a further opportunity to challenge cinematic perspective. It was a major undertaking. “To make it work, Naishuller had 13 different stuntmen and camera operators (and sometimes himself) taking turns as Henry, each wearing mask-like GoPro helmet rigs utilizing magnetic stabilization techniques,” the Guardian’s Alex Godfrey reports. More than a camera, the device used to film Hardcore Henry resembles a mask.

When Lady in the Lake debuted, Vincent Canby (the notoriously arid critic for The New York Times) dismissed the film as a “gimmick,” arguing that it neglects to make “the camera an active participant.” To answer that criticism, Hardcore Henry had to re-envision what the camera could be. That mission is nothing if not well-timed. On March 28, Oculus Rift released its long-awaited headset to the public — in which virtual reality looks suspiciously like the inside of John Malkovich’s brain. Thus far, it’s viewed by the public as a gaming console, but it suggests enormous possibilities for pushing the limits of perspective. Film may never be able to put us in someone else’s head, but if nothing else, the view looks better than ever.