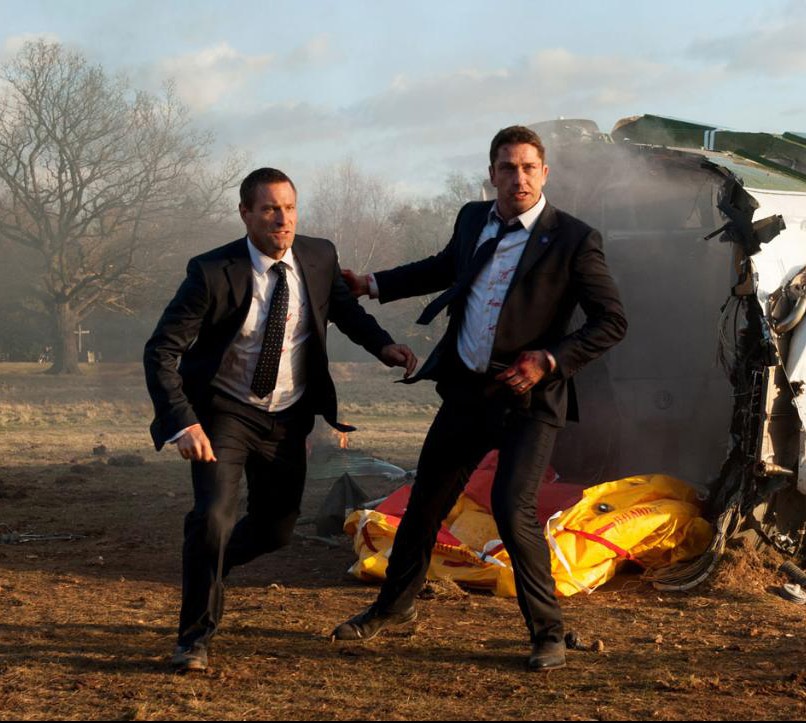 Sure, Olympus Has Fallen, this film’s predecessor, did something similar by tapping into our national fear of North Korea in a period when Kim Jong-un dominated the headlines. But by adopting a Die Hard scenario–our hero must stealth his way through a confined space in order to rescue those in distress–that film was at least able to execute a certain sort of ingenuity within its controlled chaos. Also, it was directed by Antoine Fuqua (Training Day), who is nobody’s idea of a prestige director, but at least has the basics down.

London Has Fallen, however, is helmed by Swedish director Babak Najafi (Easy Money: Hard To Kill), who flails when tossed into the winding streets and dim tunnels of downtown London. The story is equally unwieldy, with President Benjamin Asher (Aaron Eckhart) attending the British Prime Minister’s funeral alongside an assemblage of world leaders. Of course, this is simply a set-up for an impossibly complicated terrorist attack perpetrated by Middle Eastern terrorists whose motive for such widespread slaughter–major landmarks are destroyed, as are thousands of citizens and tourists–laughably, inconceivably simple. Asher survives the initial attacks, and once again it’s up to Secret Service agent Mike Banning (Gerard Butler) to shepherd the Head of State to safety.

Banning, it needs to be said, is a monster. Yes, he’s our hero, but dude kills people constantly. He kills when it’s not necessary. He is the opposite of Batman. He is Nathan Drake: he shoots and stabs living, breathing humans one second and cracks gay jokes the next. Yes, I know that sounds so-bad-it’s-good, but London Has Fallen is so relentlessly serious in every other aspect that satire, camp, or even the mildest moral conundrum have nowhere to bloom. When Banning slowly sinks his knife into a faceless, nameless terrorist, we’re expected to cheer. When he calls their (unnamed) country “Fuckheadistan”, we’re expected to cheer. When he screams at a soon-to-be-slaughtered Arab, “You’ve been trying to kill us forever!”, we’re expected to cheer. Banning’s tacked-on B-story is that he’s about to be a father, and all I could think the entire time was that this kid’s getting a dagger in his soft, pink flesh the first time he cries. Also, that when Asher’s out of office he’s absolutely voting for Donald Trump.

Najafi is a Middle Eastern refugee, so you’d think the Middle Eastern characters would be given some measure of depth, some subtle hook of empathy to hang your heart upon. Instead, he humanizes the villains by putting one in a wheelchair and casting a great actor in another–as ringleader Kamran, Waleed Zuaiter finds pathos in even the most thinly written character. But, good actors or no, the same terrorists who were able to bypass the world’s most stringent security measures are also uncovered by a few taps on a keyboard. When they touch on legitimately interesting concerns about drone strikes and innocent lives lost, they’re as disregarded by the filmmakers as much as the characters.

But London Has Fallen’s problems aren’t limited to its xenophobia and jingoism. It’s also just ugly to look at. Najafi doesn’t create a single memorable tableau, not even when destroying London’s most identifiable structures. Thankfully, there’s less CGI blood than in Olympus Has Fallen–there’s hardly any blood at all, surprisingly, despite all the mass murder–but every launched missile or crashing helicopter looks divorced from the environment it occupies. You can almost see the pixels.

What London Has Fallen does have is a stacked cast. Returning alongside Butler and Eckhart are Morgan Freeman, Melissa Leo, Jackie Earle Haley, and Robert Forster, a gaggle of Academy Award winners/nominees who, in this movie, could not possibly be asked to do any less. And Butler? He’s a caveman, a brutish and single-minded one-man slaughterhouse.

All that said, London Has Fallen certainly isn’t boring. Ugly and infuriating? Absolutely. But not boring. If you can stomach Butler’s sadism and atrocious one-liners, many of the film’s action set pieces whiz by with a bang. There’s also a few twists that, despite being obvious, are fun to watch unfold. But that doesn’t make up for the film’s nauseating raison d’etre, which advocates wholeheartedly for violence and demolition. Should it score another sequel, it’s sure to come on the heels of whatever terrorist group hits the headlines next.