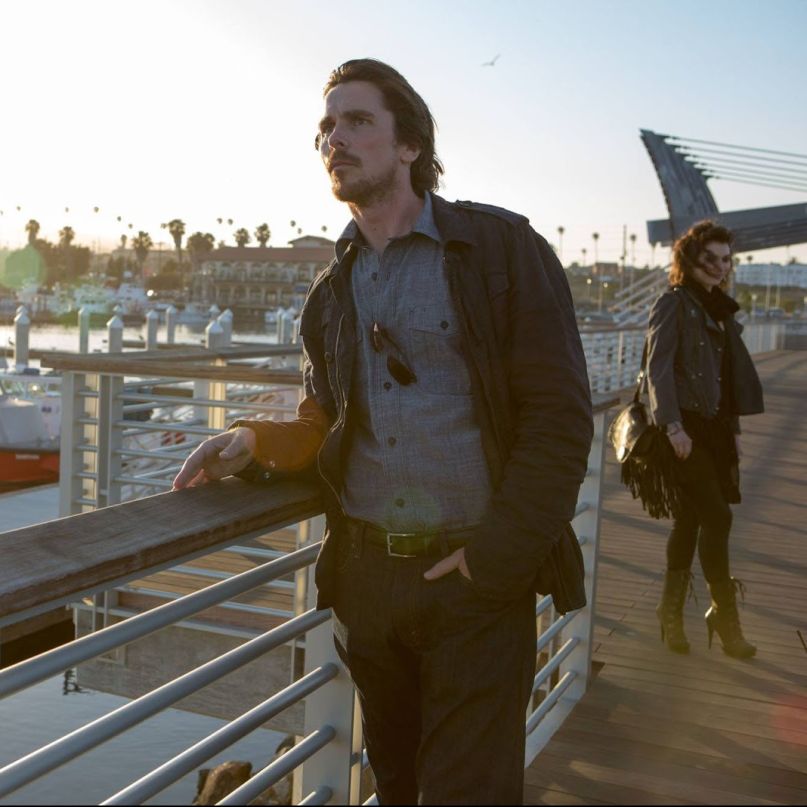 Knight of Cups tells a story of Los Angeles hedonism, of indulgence and the search for meaning among the material, as only Terrence Malick could tell it. Which is to say that there’s something unusually childlike about the odyssey on which Rick (Christian Bale) finds himself, even as it takes him through strip clubs and apartment robberies and more than one sexual encounter and, at one point, a Diplo show at an EDM festival. The parties Rick attends almost uniformly have a sad, facile quality to them, a sense of loss hanging over even the wildest encounters. Early, as Rick cavorts beside a rooftop pool with topless women, a disembodied voice speaks of a parable: a young prince is sent to Egypt to find a pearl. He’s given a cup by the people there, and forgets not just that he’s searching for the pearl, but that he’s the son of a king at all. And he falls into a deep sleep.

Much of Knight of Cups follows the journeys of a deeply lost man who knows on some instinctive level he’s still searching for that pearl, and feels its absence. Rick has found himself in a life he can’t truly explain, even as the film journeys in and out of his memories. Like much of Malick’s recent work, most conversations are heard and seen allusively, rather than in the moment. For often, even as Rick is present to experience one of them, he’s also elsewhere, spiritually and mentally if not physically as well. Early, one of the film’s many disembodied voices imagines Rick as a kind of pilgrim, a wanderer frightened by the world of pleasures in which he’s found himself, the one that erased all urges to find the pearl. In these moments, which are frequent throughout, Knight of Cups recalls some of Malick’s thematic work in The Tree of Life, particularly the “modern-day” sequences with Sean Penn. In that film, Malick used the developed world as a portent of dread, a place into which a pilgrim could well disappear.

Here, Los Angeles is a place of both unimaginable promise (“See the palm trees? They tell you anything’s possible”) and of facile connections that may not mean anything at all. Knight of Cups explores the city, and briefly Las Vegas as well, through a series of tarot-headed interludes: “the hanged man,” “the hermit,” “the high priestess,” et al. This is the framework for various flashbacks to loves had and imbibed and lost to time and memory. Early, he recalls a young lover (Imogen Poots) who accurately pins down a major component of Rick’s ongoing existential woe: “you don’t want love. You want a love experience.” For being somebody the film repeatedly establishes as a successful actor, Knight of Cups has no concern about or interest in Rick’s career pursuits. Cups is exclusively about the time between films, about all the hours of the day that he attempts to fill with drink or drugs or sex or some other kind of distraction that can keep him from the questions that gnaw at him.

And the guilt. Knight of Cups is a different sort of approach to spirituality for the filmmaker; while it’s very much in keeping with the dreamy spirituality of much of Malick’s work, there’s a sharpness to Cups that suggests a more defined statement on Rick and the way he chooses to continue living. And it’s not a particularly positive one. For better and worse, Cups follows Rick into deserts and dark, seedy bars and fortune tellers’ shops and the homes of women he claimed to love with the curious, inquisitive eye of a child. The recently minted Oscar hat trick winner Emmanuel Lubezki shoots the film in a mixture of lush, high-definition panoramas and garish, first-person GoPro photography, pitching it somewhere between a grandiose hunt for salvation and meaning and the wanderings of a child taking in everything he can possibly get his hands on.

Lubeski’s photography allows the film to take a sort of mirthful approach to Los Angeles that’s either resonant or wildly naïve, completely depending on the scene. Sometimes, the images are exhilarating. At a star-studded Hollywood party seemingly taking place on Antonio Banderas’ estate, the film abandons Rick to the fray so that it can thrash around in a pool with dogs more liberated from the modern world than any of the partygoers. Later, it wanders around a topless bar to take in the sights with curious, wondrous eyes. Most of his flashbacks to relationships are constructed not of the elliptical dialogue playing out over a number of scenes, but of the tactile things we take away from relationships. Rick’s memories, whether of romantic relationships or of his more tenuous ones with his brother (Wes Bentley) and father (Brian Dennehy), are of grasping hands and bodies pulling away, of hair caught in sunlight and bodies framed by doorways, primed to leave. They always leave eventually.

Or, he does. It’d be easy (and, to be honest, not completely inaccurate) to peg Knight of Cups as an artfully rendered celebration of a rich man’s ennui and little else. It’s hard to argue against this when his many past lovers, though framed as integral to both the story and to Rick, are primarily just ghosts meant to assist the sleeping prince on his journey back to the light. Cate Blanchett and Freida Pinto and Natalie Portman and Teresa Palmer and others come and go, each having loved him and left him or been left by him in the long run. And each seemingly exists to fill whatever chasm exists within Rick. Portman, in particular, observes that “you have love in you, I know it,” and at points the dizzying, seductive spell of Knight of Cups is such that one might not stop and wonder until later if anything in the film has actually suggested that he does.

But it’s not just Rick’s fractured memories that play less for humanity than for thematic weight, but Rick himself. It’s not exactly a benefit of Knight of Cups that the film is more interested in grace and salvation than it is in any of its human participants, when it’s ultimately a piece about the very human themes of regret and loss and atonement, but it’s absolutely by Malick’s design that even Rick himself is something of a blank slate. It’s a complicated performance for Bale, who’s at once the center of the film’s universe and a wayward traveler careening around within it. Knight of Cups asks Bale to be completely disengaged in a world constantly seeking his engagement, and it’s a complicated bit of work that may well be mistaken for failure. But there’s more to his turn than might be apparent when watching the film.

The same could be said of Knight of Cups at large. This is not the director’s finest work, and there’s absolutely a conversation to be had about the way in which the film follows the suit of so many other, more narrative films about Hollywood power players and the many people they regard as objects in their own stories. And there’s an excess in play with Cups that Malick never quite settles on treating with love or contempt or something between the two. One of Bale’s lovers says to him that “I feel like I know more about the world than other people. I took drugs once.” There’s a note of reflexive, self-aware irony to it, but portions of Knight of Cups feels as though they’re indulging in precisely this same kind of early-college navel-gazing. And yet, others find grace and elegance in this same world. It’s chaos and bacchanal alongside pain and emptiness alongside bliss and absolute, total peace. It’s a world entered by a pilgrim who may not belong in it, or even want any part of it, but has found himself there anyway, still searching for the pearl he forgot about long ago.