A once-in-a-lifetime gig for a good cause 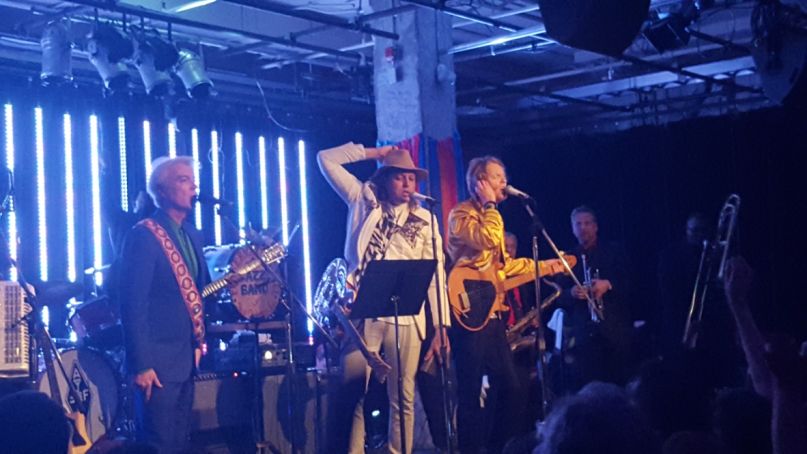 Like most winter nights in Montreal, Friday night was a cold one. With close to 10 cm of snow falling from the skies in mere hours, people were desperate for a place to hide. The Arcade Fire-produced Kanaval benefit concert seemed like a great place to seek cover; however, the venue became more than a shelter. It became a teleporting machine to Haiti. The night was a benefit for Kanpe, a non-profit founded by Régine Chassagne that “stands with the most vulnerable Haitian families towards their financial autonomy.” Kanpe means “stand up” in Créole, and the organization develops solutions to help rural Haitian communities escape the cycle of poverty and stand on their own.

The organizers did a great job of creating a festive atmosphere to stimulate the audience’s excitement. There was everything from a Wheel of Fortune game to decorative mask booths to Haitian dancing lessons that were extremely helpful in preparing for the acts ahead. Upon walking through the main doors, the audience was surrounded by fake palm trees, Mardi Gras-style masks hanging from the ceiling, and music with the power to make you dance so hard that you forgot it was -20 degrees outside.

Win Butler was the first familiar face to appear, as he donned his DJ Windows 98 moniker for a collaboration with rara musicians and traditional Haitian dancers. Several Montreal-Haitian musicians, including Vox Sambou and Fwonte, took turns rapping and singing over the percussion beats, but unfortunately they had a hard time getting the entire crowd to dance along. There were several familiar faces from Butler and Chassagne’s monthly Naive Melodie dance nights for Kanpe who were more than eager to dance to the rhythm of the Haitian players; however, there was a divide between some staunch serious Talking Heads fans who didn’t buy tickets to dance along to Vox Sambou.

The Haitian music portion of the night ended when Chassagne took the stage to introduce Rainn Wilson as her co-MC for the evening. After showing off some newly learned dance moves, the star of The Office discussed his relationship with Arcade Fire (they met on Saturday Night Live in 2008) and with Haiti. Wilson and his wife co-founded Lide, an organization that works with arts and literacy programs in rural Haiti. For a first time, this edition of Kanaval had a formal “king and queen.” The crowd cheered for this year’s queen of Kanaval, a woman who works to help integrate immigrant Haitian families into Montreal life, but they exploded when their king for the evening was announced: David Byrne. Donning a colourful, orange sash fit for a king, Byrne addressed the crowd and praised the relentless work of Chassagne and Kanpe.

After outlining the similarities between Haitian and New Orleans culture, Régine Chassagne invited the Preservation Hall Jazz Band to the stage. Starting with a slow and gentle introduction, the New Orleans flag-bearers soon kicked it into high gear and had the entire room clapping along. A particularly rambunctious performance of “That’s It!” was one of the standout performances of the night, complete with a rollicking trumpet solo and Wilson beating a bass drum at the back of the stage. Butler joined the jazz octet for their last of four songs and described them as “family” while drumming along on a beer bottle.

As the Preservation Hall Jazz Band finished their last song, Byrne, Chassagne, and Arcade Fire member Richard Reed Parry joined Butler at the front of the stage and dove into a performance of the Talking Heads’ “Road to Nowhere”. Butler and Byrne traded verses as the Preservation Hall Jazz Band gave the song a new-found texture. Before the next song, Butler ordered the room to “get down and take a knee for your King.” An embarrassed Byrne laughed off the tribute as the crowd slowly got back to its feet to dance to “Slippery People”. The chemistry was evident onstage between Byrne and the Arcade Fire members, possibly stemming from the musicians’ previous collaboration on The Suburbs bonus track “Speaking in Tongues”. Although the performance was truly a once-in-a-lifetime moment, some audience members were disappointed that the supergroup didn’t play any Arcade Fire songs.

“This is one of my top five songs of all time,” Butler declared as the Preservation Hall Jazz Band horn section belted out the familiar opening to “This Must Be the Place (Naive Melody)”. Seeing Butler flash a rare smile while singing the chorus made it evident why Butler named his monthly Montreal DJ set after the song. Arcade Fire and David Byrne are known as some of the most serious musicians around, but the exuberance beaming off the stage was contagious and had the room singing every word. The night concluded with “We Bid You Goodnight”, a surprise finale made popular by the Grateful Dead when ending many of their concerts. The song featured Byrne on acoustic guitar, and each singer contributed a chorus before the crowd became familiar enough with the song to sing along. For the Montreal francophone audience, the word “goodnight” was substituted with “bonsoir” as Byrne and each member of the Preservation Hall Jazz Band left the stage in turn.

Although many people left at the conclusion of the supergroup’s performance, the last jam of the night featured Butler on cowbell, Chassagne on keyboards, and the Preservation Hall Jazz Band’s Ben Jaffe and Joe Lastie Jr. as Haitian singer Paul Beaubrun delivered stunning vocals and got the crowd fired up. After a hypnotic performance, Butler the cowbell player became Windows 98 again and DJed until 3:00 AM as crab cakes and pastries circulated through the audience. As the night grew late, the audience members who remained became more devoted, and the once fractured crowd erupted into the most festive dance party in the city. Arcade Fire have long been the voice of Montreal’s music scene, but on this night they brought the voices of an underappreciated Haitian music scene to a legion of new fans. This was not just another benefit concert; it was a well fleshed-out benefit “experience” that the lucky few audience members will not soon forget.