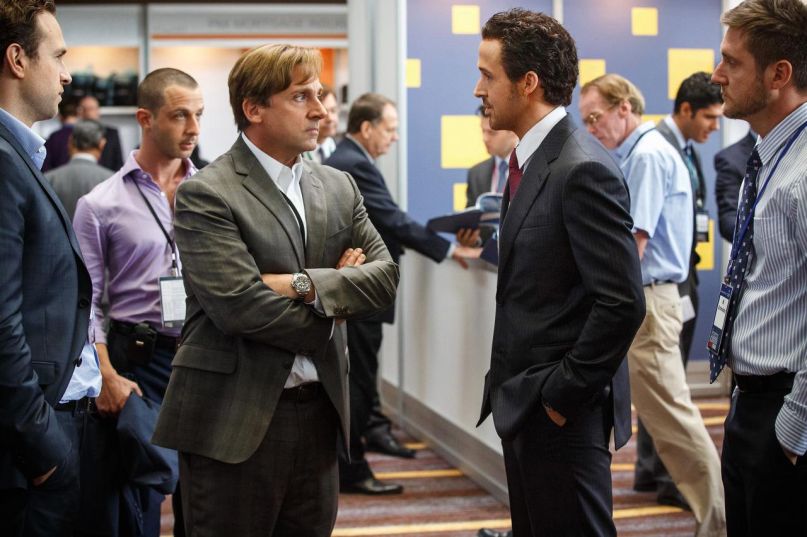 The Big Short rides an endlessly appealing line between gut-busting and vein-bursting. It’s an economics lesson with a pulse, a raging pulse that thrives on its unpredictable humor and a deep sense of dread, recounting just how few were in the know, on the way to the economic crises of the last decade.

Actually, this just won’t do such a manic film justice. Here: The Big Short is an unorthodox account of the modern American milieu with grown men screaming about being “jacked to the tits,” or “motherfuckers,” as a preamble to doling out dynamite on the big banks.

The Big Short investigates how a handful of investors and economists saw the real estate market bubble of the mid-2000s as it was ready to burst, and profited from it, but not without deep guilt and dismay about the larger implications. The entire country and finance industry was “asleep at the wheel,” as the film puts it. The Big Short is a sort of whodunit about what happened and exactly how the American public was swindled. It’s a dramedy, mind you, full of asides and snappy answers to stupid questions, plus valuable cameos! It’s intelligent even with its attention-deficit structure, as history and humor blitz one another. Based on Michael Lewis’ novel of the same name, the movie looks at events and individuals that could see through Alan Greenspan’s Randian rah-rah about the economy being rock-solid thanks to its being propped up against mortgage loans.

A gang of loosely connected dorks like investor Mark Baum (Steve Carell, taking names in a blond wig), hedge fund manager Mark Burry (Christian Bale with a glass eye), trust fund kids Jamie Shipley (Finn Wittrock) and Charlie Gellar (John Magaro), Deutsche Bank higher-up Jared Vennett (Ryan Gosling, full bro), and former trader Ben Rickert (Brad Pitt), witness the engorging bubble. Some of these guys are real, some are not. What matters is that they all had the foresight to fear the real estate market. The snowball effect of bad loans and adjustable mortgages is illustrated by each man’s astonishment that nobody at the big banks or on Wall Street seemed to care. The Big Short strides from one character as it considers the multi-faceted levels of obliviousness on hand, while explaining how guys like Baum and Vennett and Barry stood to gain. We see the grief, the ignorance, and the dollar signs in everybody’s eyes.

This is hard material, sold cleverly by a talented, fraught, and well-wigged cast, who are all elevated by a feral script. Former SNL head writer and Anchorman maestro Adam McKay takes classic social realism and amps it up with nervy comedy. Fourth wall-breaking goofs on bad behavior coexist with fact-based rants against greed and chauvinism. Like Mamet, but sillier. McKay’s always had a knack for negative, inventive language (see: Anchorman quotes). He has a way of rendering male ego and the non sequitur as memorable art. Here, that knack is used in service of a benevolent lecture. He provokes with harsh, unexpected language (a “buttfuck” here, some jokes about “dirty bombs” there, and all subprimes are “shit”) but once McKay has your attention, he manages to sneak in some jaw-dropping rhetoric about the national rooking staged by major banks. To the novice, CDOs and subprimes and AAA ratings become completely understandable. And unsettling.

(Read: Reel Estate: The Year the Mortgage Crisis Went to the Movies)

The smartest thing The Big Short does is let you feel dumb. But only for a second. Vennett narrates much of The Big Short. It’s good narration: clarifying, as well as cuckoo. At one point early on, after hilarious punchlines about shady bankers and the history of subprime mortgages on Wall Street, Vennett calls out the audience. He really does. He observes that people, when pressed to converse about the mortgage crisis or the bubble or the recession, often have a few canned answers so as to not sound dumb. But then, nobody wants to seem like a nincompoop when billions of dollars were lost. In The Big Short, it’s best to listen up fast.

Now, The Big Short more than entertains and enlightens, but it’s not without its woes. Oscar-winning luminary Marisa Tomei shows up for nothing more than a wifely, distracting pep talk. In general, women are scant. Finance may be a boys’ club, such is the profession being depicted. McKay also brings in the naturalistic DP Barry Ackroyd (The Hurt Locker, United 93) for his signature handheld shake, but the film is more about coverage than any real photography. And Hank Corwin, a former Oliver Stone editor, brings white flashes, and cross-cuts with little purpose beyond keeping things, like, intense? The quick cut asides work for the humor (Phantom of the Opera opening a gaudy location? Beautiful.), but the “serious” touches, the color flairs and experimental sound seem needy when the writing’s already doing so much. So yes, ironically enough, a wealth of resources is kind of a hurdle here.

Still, The Big Short finds McKay in a new and promising mode. Not only has he made the most amusing Michael Lewis adaptation yet against others like the gray Moneyball and the pasty The Blind Side, but McKay’s taken steps to craft a genre in the vein of post-9/11 films. The Big Short has timeliness and facts on its side. It has something to say, something serious and outraged. Something that makes you so mad it’s probably necessary to joke about, lest one have a heart attack realizing what the banks got away with. The public got screwed, and The Big Short aims at the right people.

The Big Short is like seeing the best of Oliver Stone return in crude, unrestrained form, reborn as a mad jester. The film yells so hard that it throws out its back trying to grab your attention, but it’s equally important, informative, and brazenly funny.