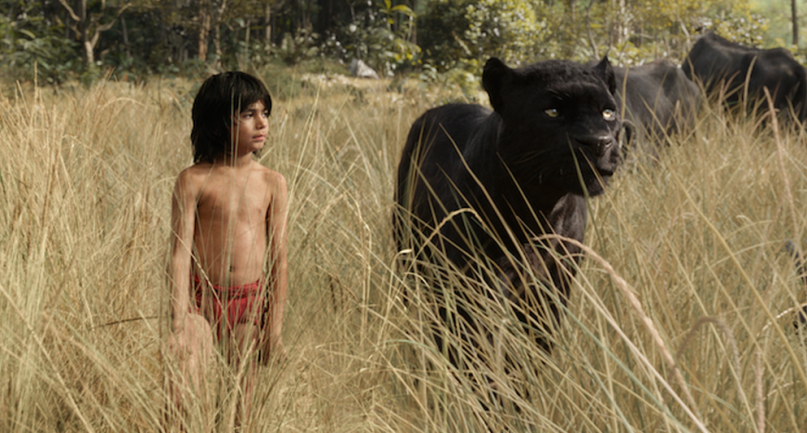 Disney has revealed the first look at its live-action remake of The Jungle Book. Directed by Jon Favreau, the film reimagines the original 1967 movie as a thrilling adventure that blends live performance with motion capture and animation. The story follows a young orphan boy raised in the jungles of India by a pack of wolves and his closest friends, a bear and a black panther.

Among the members of the all-star cast are Bill Murray as Baloo the bear, Ben Kingsley as Bagheera the panther, Idris Elba as Shere Khan the evil tiger, Christopher Walken as King Louie, Lupita Nyong’o as Rakcha, and Neel Sethi as the little boy Mowgli. The only voice we hear in the trailer, however, is Scarlett Johansson as the snake Kaa, though there are a few familiar notes whistled by Murray near the end.

Due in theaters April 15th, 2016, watch the trailer for the film below.

The film isn’t the only live action take of the property on the horizons. Warner Bros. had originally schedule Jungle Book: Origins for an October 2016 release, but pushed it back to October 6th, 2017 to allow more time to work on special effects. Serving as acclaimed motion-capture performer Andy Serkis’ directorial debut, Origins is said to more closely follow the dark tone of Rudyard Kipling’s original novel. It also has an equally impressive cast that includes Serkis himself as Baloo, Benedict Cumberbatch as Shere Khan, Christian Bale as Bagheera, Cate Blanchett as Kaa, and Rohan Chand as Mowgli. King Louie was created by Disney specifically for the 1967 movie, and thus doesn’t appear in Origins.