Everyone would be a lot happier if they’d escaped the teeth of a T. rex at least once a year 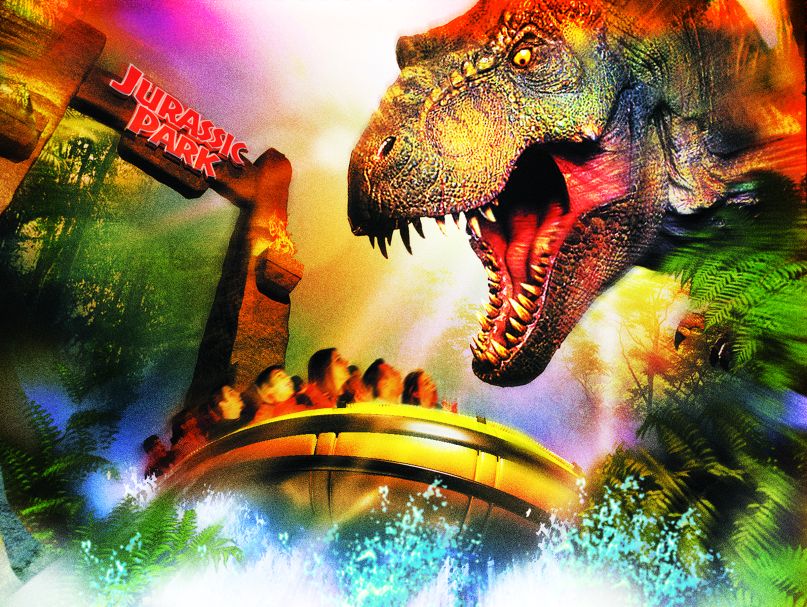 Jurassic Week stomps on! In anticipation of Colin Trevorrow’s Jurassic World, Consequence of Sound is publishing a related feature each day leading up to the blockbuster sequel’s Friday release. Yesterday, we published our complete rankings of InGen’s terrifying prehistoric creations and today staff writer Rebecca Bulnes recounts her family trips to Orlando, Florida’s Islands of Adventure and how the Jurassic Park River Adventure became her unlikely safety net.

Growing up in Miami meant many things. It meant Spanglish on the radio and traffic on I-95 and being so close to the equator that the heat became a part of you. It also meant being two movies in the backseat away from Orlando, Florida, a place where dreams come true.

Living four-ish hours away from the theme park capital of the world meant that every long weekend was spent there with every holiday or summer vacation already pre-planned. It was tradition. Universal Studios was our destination every time, because honestly, we were over Walt Disney World in a flash. Universal encompassed Islands of Adventure, which would become a strange home away from home. It had it all: Marvel Super Hero Island, Toon Lagoon, Seuss Landing, The Lost Continent, and most importantly, most vital to me, Jurassic Park.

I have and always will love visiting Islands of Adventure, but there’s one small problem: I have terrible motion sickness. Like, bad. The rest of my family, however, does not. My mom will ride The Hulk three times in a row if you let her, completely unfazed. Cousins half my size would fly through the air upside down, no big deal. I, on the other hand, without a heavy dose of Dramamine pumping through my veins, will puke on a plane. It was a fun childhood.

At Islands of Adventure, Jurassic Park was my savior. It was the light at the end of the tunnel of holding people’s bags as they rode huge rollercoasters that made me dizzy just looking at them. Jurassic Park River Adventure was the one ride that I could go on again and again, where I could be the front row hero of the day. It was my vacation from vacation.

To step under that archway as John Williams’ iconic themes soundtracked my triumphant walk was to finally be where I could have all the fun. Entering that corner of the park was really just stepping into the world of the film. I’d even argue that one has never truly experienced the movie without having gone to the park and that ride. Stepping onto the raft, we became characters in a Spielberg world, and the adventure was all our own.

I’ll never forget splashing into the river for the first time, turning a corner towards the large wooden gates as a loud and wise voice echoed over the speakers, saying: “Time, the ever-flowing river … Come with us now to a time before man, when the river flowed through a new-born world, and giants walked the earth. Welcome … to Jurassic Park.”

The gates creaked open, and we drifted into the mist-filled Ultrasaurus Lagoon, the long necked dinosaur swooping down towards us. Its incredible height filled my younger self with as much awe as when Sattler, Grant, and Malcolm gazed upon the giant Brachiosaurus for the first time. Sure, I knew they weren’t real, but when you’re a kid, does it even really matter? Real or not, that dinosaur was huge and made my heart skip a thousand beats as we drifted past, more and more dinosaurs popping up from the river and splashing us playfully.

(I’ve been on the ride countless times at this point, but even as an adult, I can’t help but get excited when I see that first dino crane above us. I mean, why wouldn’t I? Dinosaurs! John Williams score! What else do you need?)

The first time my raft steered into what I would eventually refer to as “The Danger Zone” is one of my earliest moments experiencing genuine fear. The open gates, the warning signs of “Danger”, “Keep Out”, and “Raptor Containment Area”, and that ominous alarm … I thought we were legitimately entering a place we shouldn’t be. (So, bravo stage designers.) As a kid, everything felt so real, as if we’d really gone off course into a restricted area of the park, and that we absolutely needed to turn around immediately. I’d grasp my mother’s hand and gaze up at her, as if she could help at all.

Slowly, we entered the darkest parts of the ride: red lights flashing, ominous screeches, a Dilophosaurus here, a Velociraptor there. Then finally, as we ascended higher and higher up, startled and distracted by the chaos, we’d hear it — the thumping of large footsteps growing closer and closer. Impossibly large and horrifyingly real, the Tyrannosaurus rex emerged from behind the smoke and lights, its wide jaws taunting us and chomping closer and closer as its roar deafened. We’re totally goners, I thought. But then, in the nick of time, we fell 85 feet down the waterfall.

There’s nothing more cathartic than screaming out, arms in the air, heart plunged into your stomach, waves of icy cold water splashing over you on the hottest days of summer. It was the most fun I’d have all day in the park, and the feeling I’d look forward to as school days dwindled down. Growing older, that dive never wavered as an incredible feeling. It became like therapy; in fact, I’d argue that everyone would be a lot happier if they’d escaped the teeth of a T. rex at least once a year.

After that first time, I always sat in the front row, insistent on being the first victim of the ride’s many surprises, even when they weren’t actually surprises anymore. In hindsight, my life could legitimately be chronicled by the way I’d experience the River Adventure. Whether I was a frightened sun-screened child hiding behind sweaty fingers, or a sarcastic preteen in a band t-shirt, joking around and trying to shatter the illusion — it was my backdrop. That ride has seen all phases of my life thus far, snapped in the hidden camera as we screeched down the waterfall…

…a secret time lapse of a Florida-born kid.

The last time I went to Islands of Adventure was during this past Christmas holiday. I flew in from Chicago around 8:30 p.m. and we all drove through the night to Orlando. My seven-year-old brother had never been on the ride, so I decided that this was going to be his day. Once we were in the park, I grabbed his little hand and led him through the same archway, that was playing the same music, and for his sake, opted for a seat closer to the middle — after all, it was his first time.

Tucked away in the boat, he shouted out the names of the dinosaurs as we drifted past them. I couldn’t help but beam a stupid grin on my face the whole time. As we entered The Danger Zone, I squeezed his hand. He screamed, I screamed, but together we survived the adventure. Soon enough, the film’s triumphant theme welcomed us back to safety victoriously as we shook the water from our hair and wrung out our soaking wet shirts. He was terrified. But he’s got time.