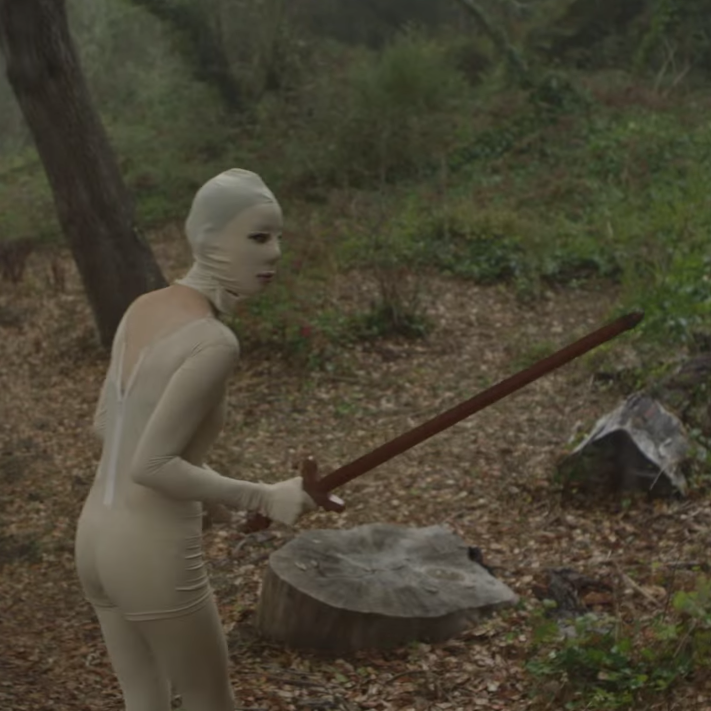 “The struggle of being female is that you’re constantly objectified and discredited for anything you do, because you’re a female. Everything is qualified by the fact that you don’t have a dick, or that just because you’re a girl, gives men the right to grope you, or fondle you, or do what they want because they’re fucking selfish and exploitative. And a lot of guys don’t understand that just because you don’t have a gun pointed at your head, that there are other forms of violence. There’s other forms of abuse that…most forms of rape are perpetuated by someone that you know. And trust…And people don’t fucking get it. I’m just tired.”

Amy (Amy Everson) lapses into this realization of her world in a brief fit of nakedly vulnerable exhaustion at one point in Felt. Based on Everson’s own experiences (she shares story credit with director Jason Banker), the film approaches the complicated narratives of rape survival in a world so heavily dictated by rape culture as a mixture of body horror, wrenching drama, and surrealism. It’s appropriate, for this is the world in which Amy lives, and the effect it’s seemingly had on her. She can’t get out of bed. She can’t eat. She can’t go out in the world, because every man she encounters is now, suddenly, a threat waiting to happen. When she goes on an ill-fated online date early on, her date sees fit to crack a roofie joke over their first drink. He likely thought little of it, and may or may not have meant anything by it. But for Amy, that’s irrelevant.

One of the few things that keeps her going is her art, and it’s that art that forms much of Felt’s substance. The story, while relatively linear, is tangential to Amy’s inner struggle, which Everson painfully captures with every shamefully cowed reduction of posture or private burst of cathartic pain. Amy’s lost in her world, which Banker uses a number of methods to illustrate, from a general sense of displacement from scene to scene (it’s rarely clear how much time has elapsed between scenes, or what may have changed in between) to the film’s muted score, a choppy, mix-jumping set of scores that put even the most innocuous scenes of everyday conversations on edge.

But her art, her felt costumes and endless handmade creations, are how she processes everything from trauma to rage to confusion to any number of other emotions. Perhaps the most stomach-churning aspect of Felt is in the way it turns the everyday world into a landscape of endless paranoia, and it’s only in the suits that Amy can feel safe in it again. The primary suit, and perhaps the most curious, is the one that sees Amy don a frightening sack mask and a massive plastic phallus. The phallus factors heavily into much of her creative work, and it makes sense given Felt’s nihilistic vision of the world; it’s at once a source of revulsion and terror, but also a signifier of power that has the potential to be reclaimed.

Sometimes, though, Amy sets her art aside and tries to rejoin the world, and that’s where the trouble lies: the groping, the staring, the insinuations, all spurred on even more heavily by Amy’s general anxieties regarding most things, which tend to emerge in spastic fits of giggling, scatological immaturity. It comes to a head when a scornful bar encounter with a friend leads her into meeting Kenny (Kentucker Audley), an unassuming guy who Amy declares the more “sensitive type,” and to whom she’s able to open up a bit when she’s not keeping him at a studied, more comfortable distance. The film plays their meet cute and subsequent encounters with a genre filmmaker’s eye, a lingering menace that’s hard to place. It could be genuine menace, or because of how ably Everson portrays Amy as an exposed nerve when she’s put near other people, perhaps it’s just the fear again.

Felt is a brutal experience, but also a deeply edifying one. It approaches post-assault life with sensation rather than storytelling, and makes palpable the ragged effort of constantly trying to perform whatever role will be the safest and the least emotionally compromising, day in and day out. Even in the film’s final moments, when its tone takes a dramatic and rather jarring shift before its abrupt, staggering conclusion, Felt is a full-throated shriek of simultaneous rage and fear, a thriller speaking to one of the planet’s oldest sins. And in the moment on which this review started, the one when Amy finally speaks a bit of truth to power in one of the rare moments she feels safe, Felt reveals itself as less of a case for some kind of higher understanding than a threat.