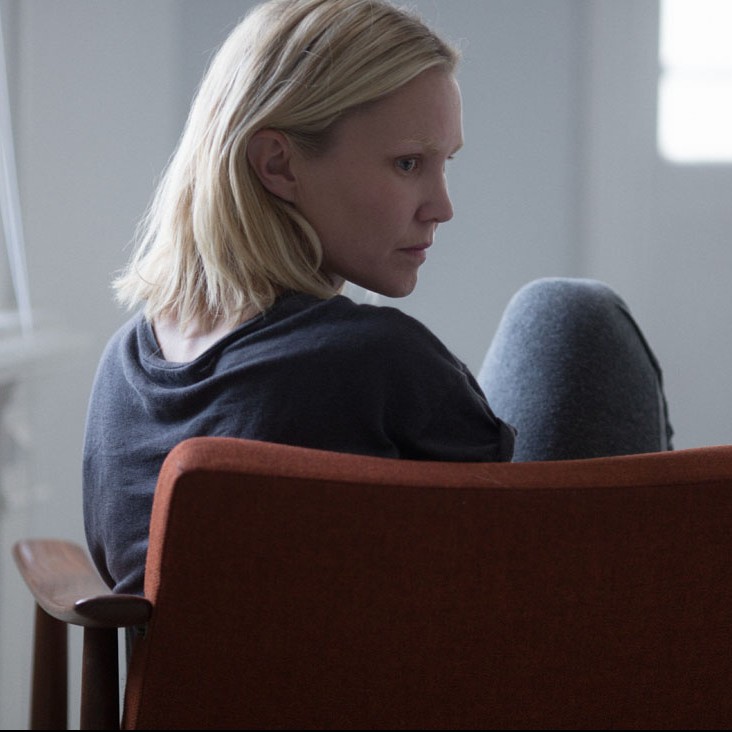 Here’s an exercise: Close your eyes, but really close them. Can you see? No? Good. Now, walk to your kitchen without opening them once. Feel around, if you will. Move slowly, if you must. Whatever you do, don’t cheat. You’re not supposed to see. You can only trust your instincts. Once you’re there, try making a cup of coffee. Or a bowl of cereal. Or maybe slice a few pieces of fruit. Remember, there’s zero peeking. You’re blind.

This terrifying activity is but one daily challenge for Ingrid (Ellen Dorrit Petersen), the brilliant and fascinating protagonist of Eskil Vogt’s surrealist drama, Blind. Having recently lost her eyesight, the troubled woman spends her days comfortably locked inside her high rise apartment. She listens to Sonic Youth, she sips cups of tea, and she waits patiently for her husband, Morten (Henrik Rafaelsen). Her thoughts entertain.

That’s where the trouble begins for Ingrid, who insists that she must keep her imagination and memory fresh in order to visualize and reference people, places, and things. But the mind is a powerful tool and it’s wont to run loose. What starts out as a harmless exercise quickly devolves into an endless nightmare as she attempts to paint the world beyond her fingertips, fueled by a litany of insecurities, anxieties, and fears.

These emotions are poured into a story that Ingrid starts to write on her laptop. She dreams up two characters — Einar (Marius Kolbenstvedt), a scruffy, porn-obsessed recluse, and his neighbor, Elin (Vera Vitali), a pretty single mother — who are just as lonely and frustrated in their own solitude. At first, the fictional spirits are ideal outlets for Ingrid’s deep-seated fantasies and meditations, but soon enough, she lets them into her actual life.

Blind is a strikingly beautiful and intuitive escape into the mind of a blind person, and Vogt writes and directs the film as if he has experienced such terror. There are situations in this story that are so unique and yet also startlingly universal. When Ingrid fears her husband may be cheating online with another woman, it’s a tangible guilt. Why not? Wouldn’t you question his pauses at the keyboard? Wouldn’t you wonder? How would you know for sure?

A quote by Buddha feels applicable here: “The mind is everything. What you think you become.” Granted, that’s a burden shared by everyone, but it’s a vivid crisis for Ingrid and one that Vogt portrays with ease. Similar to the work of Michel Gondry, though sans the twee, the Norwegian filmmaker takes us deep into the inner psyche of his protagonist and hardly fractures the narrative. It’s stylish without losing any substance.

Inventive visual cues are aplenty — for instance, the setting of a coffee shop comically blends into the back of a bus — but it’s the more tranquil and intimate moments at home that truly grasp Ingrid’s point of view. During one afternoon, she strips and presses her naked body against a window, attempting to feel the world the only way she knows how. Later, she struggles to arouse her husband, pleading: “When I smile at you, I don’t know that you see it.”

This is sad stuff, sure, but Vogt strikes a perfect balance between drama and humor. It also helps that the majority of his characters are constructs of Ingrid’s wicked sense of humor and imagination, played out to perfection by Petersen. As such, there’s a number of scenes that are very funny, despite the situational horror that drives them. That the film never becomes something ultra depressing like The Diving Bell and the Butterfly or Amour is actually quite a relief.

Yet Blind isn’t just about Ingrid. The film ruminates on trust, on desire, on perception, on gender, on isolation, on a handful of themes that are all applicable to anyone. In some respects, Vogt appears to have constructed the perfect parable for today’s online culture, a society built on never feeling or touching but simply seeing. All too often we’re blinded by our own insatiable hunger for something that’s not really there. How terrifying is that?

You can open your eyes now.