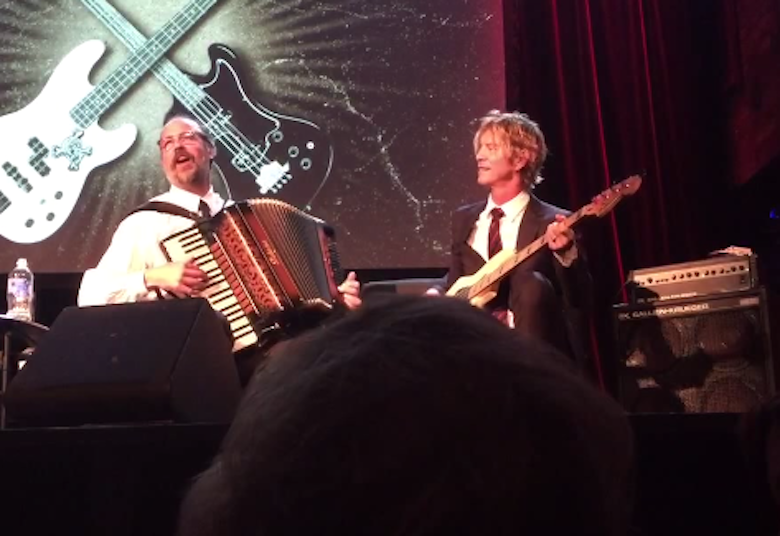 On Sunday evening at Seattle’s Neptune Theater, Nirvana‘s Krist Novoselic sat down with Duff McKagan to chat about his new book of wisdom, How To Be A Man (and other illusions). The night wasn’t only about conversation, however. After being introduced by Pearl Jam’s Mike McCready, the former Guns ‘N Roses member picked up his bass, Novoselic strapped on an accordion, and the two played through the GNR classic “Sweet Child O’ Mine”. Novoselic did his best to follow the guitar and vocal parts on the keyboard, and got some help from voices in the crowd.

“That got you sweating,” McKagan said after finishing the rollicking performance. “Wow! There’s a lot going on there. Two hands!” It certainly was a sight to behold, and you can watch the whole thing thanks to the YouTube video below (via Alternative Nation).

For anyone who has watched the Kurt Cobain biopic Montage of Heck, you’ll know the Nirvana frontman frequently mocked Guns N’ Roses. Ironically, however, McKagan was one of the final people to see Cobain alive as the two sat next to one another on a flight from Los Angeles to Seattle days before Cobain’s death.

Below, watch our new video interview with McKagan in which he discusses his book and a host of other topics.