Remake This! The Butcher Boy

Dare someone try again to adapt this "un-adaptable" novel? 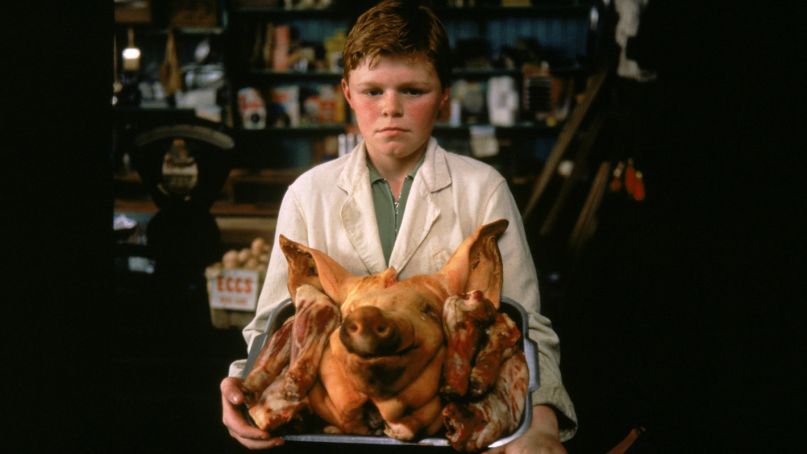 Welcome to Remake This!, a series where we look at past movies and not only propose they be remade, but suggest how to remake them. Whether a movie tanked, had a good concept hidden within a weak film, or we just want to give something another chance, Remake This! is a cinematic “What If?” wish list. Our last installment suggested a Coen Bros./Kurt Vonnegut mash-up, and this time for the week of St. Patrick’s Day, an Irish cult classic novel gets a second chance at the big screen.

The Butcher Boy was not a disaster by any means. In fact, it was fairly well-received when it first came out. It was in the National Board of Review’s 10 best films of 1997 and won a small handful of awards at festivals. So, where’d it go? Why isn’t anyone talking about, let alone remembering, this film?

Because it was extremely hard to get through the first time, that’s why.

Perhaps the reason The Butcher Boy was so critically lavished in its time and is now seldom discussed is because it’s so bold (read: assaultive). It took risks, that’s a given. David Denby, of New York Magazine at the time, nailed it: “I find myself in an embarrassing position: I think this is a great movie, but I’m not sure.”

It’s such a reckless and shocking film. Yet does (or can) anyone really connect with it? The movie just gives you post-traumatic stress if you revisit it. Go back and you’ll see a sub-Kubrickian, wildly out-of-control after-school special about abuse. But maybe it’s ready for a another chance, some cinematic rehabilitation.

Patrick McCabe’s bizarre Irish novel The Butcher Boy is rife with black humor. It’s a tragicomic take on a boy named Francie and his daily perils and how his imagination nurtures him in all the wrong ways. He retreats into violent daydreams and fantasies to cope. With what? There’s his father, a man of drunken despair, and his mother, a suicidal woman who needs to be committed. Francie has stodgy, cruel neighbors, and worse, he’s molested by a priest. It’s a book full of abuse, murder, poop, the IRA, parochial terror, and deli meats. Yet the book has a sense of humor and levity amidst its lower-class terrors and a spirited and youthful energy. Francis Brady, the Butcher Boy, is a victimized hero and a representation of tainted youth.

It was a hot book that Neil Jordan, the eminent Irish director, bought while directing The Crying Game in 1992. Released very quietly in 1997, the director’s adaptation was an exuberant, surreal, and altogether depressing affair. And that’s likely why nobody talks about it today.

It’s like a punchy Terry Gilliam film that stinks of dirt and alcoholism. It plays like dated shock cinema. Francie sees things, engages in violence, and the film goes hog wild in depicting this boy’s life. But that’s the problem: it’s a hyper-active period drama, covered in hallucinatory fervor and Irish poverty. For all its enthusiasm, it makes crazy and/or lazy decisions. At its worst, it’s just a kooky Irish specialty film.

There’s the nagging narration, a hallmark of generally weak film adaptation. It’s a tactic that re-uses heavy prose and inner thoughts as a means to justify what the movie’s showing, yet The Butcher Boy has such vivid imagery that it’s odd to use that convention here. Jordan exercises zero restraint in his story, aiming for a film that’s everything to everyone. It’s a competent comedy, dramedy, drama, period piece, drug movie, and Irish historical jaunt. It’s a weird blend of pigs in atomically wasted cars. Dutch angles and ironically cheery and twang-y old-time music. There’s a foul-mouthed Virgin Mary played by Sinead O’Connor. Not to be uptight and suggest a movie not let its freak flag fly, but the film’s too weird for its own good. Or rather, it’s the wrong kind of weird. The boy and the film are so desperate for attention that watching him/it now can be headache-inducing.

Heh, he yelled, “Fack you!” at some fish! Wait, why? Because he’s a bit of a bratty problem child with sociopathic tendencies brought on by a multitude of factors that will manifest in brutal ways later?

That was understood in the first five minutes when Francie’s drunk dad comes home and starts kicking in a TV. Go deeper, film, please. The sideshow horrors of Francie’s life need to amount to something more substantive or at least generate some empathy. There has to be more to The Butcher Boy than the final film elicits, and the book had it. It had pathos amidst all the meat and manic behavior, one of the benefits of stream-of-consciousness prose. But again, it’s too much of a cop-out to use narration for an entire movie, unless you’re a noir, or Goodfellas.

The Butcher Boy has such a promising concept, and the 1997 adaptation has hints of greatness and daring. Since The Butcher Boy captures the fragile, schizophrenic mind of a young boy, it’s no wonder Jordan chooses dramedy. It’s nerve-wracking, to say the least. As drama, it never gets solemn enough for us to emotionally invest in Francie. He’s depicted as a wild, id-like creature. As a comedy, it’s not that funny, and at its worst, it’s insensitive and kind of creepy about the fact that this young boy will degrade beyond repair. The Butcher Boy shocked and amazed as a novel, and Jordan clearly directs it with glee. He immerses himself in the story, faithfully adapting the novel, a novel that McCabe himself thought un-adaptable.

Yet it’s still absolutely worth bringing back and ironing out the wrinkles. There’s a deep, troubling, funny, and moving story about youth in the source novel. It’s about a boy with no support living in terrible circumstances. McCabe’s novel is brimming with Irish wit and worry, and it could make for a deeply disturbed masterpiece, rather than an unsympathetic show reel. The key is having a laugh, but feeling the pain as well. The Butcher Boy ought to get another chance. A cleaner, tighter, more nuanced chance.

Poor Eamonn Owens. He didn’t do anything wrong. The rascally, ginger actor was 13 or 14 when he made The Butcher Boy, and he came to it with all the energy one would expect of a teenager in this role. The problem was Jordan giving Owens what comes off as unlimited control. Owens was a freakishly surly and over-active young actor, and while that’s probably the point of a story about a manic daydreamer, it makes for tiresome viewing. It’s like watching your young nephew swear. It’s funny the first time, but after a while, you really start to get annoyed with the flowing profanity.

Admittedly, casting a wee Irish lad is a bit of a trick. What movies of recent note have had precocious, charismatic, and nuanced young Irish child actors in them?

Just do the standard casting call and see tens of thousands of child actors. Make sure they can express the following: innocence, sincerity, insanity, rambunctiousness, fear, and above all, a lingering, growing, and unknowing blood lust. No sweat!

In fact, avoid stars altogether. They take you out of a story with this kind of frenzied plotting and behavior. Please, no cute cameos from Liam Neeson as the priest or Michael Fassbender as the drunken father. Go with unknowns, so as not to offset the mood.

Neil Jordan was a great director at a peak moment when he made The Butcher Boy. But I’ll be damned if the thing didn’t work for a multitude of reasons. Every choice was a good one, or at least an interesting one, but few worked. Again, Sinead O’Connor?

Alan Parker, were he still directing and taking names, would be perfect for this. The Commitments is one of the catchiest, silliest, most whimsical modern stories about Ireland. It captures the comedy of dreams against poverty in a splendid way that would benefit McCabe’s book were it to come to screen again. But he hasn’t made a film since 2003’s The Life of David Gale. He probably won’t make another one.

John McDonagh is a probable choice. The guy has already two of the most well-liked Irish films of the last decade in Calvary and The Guard. He has the righteousness and the fury to do the dark stuff with a brooding, blustery sense of humor, but could fall victim to the kind of hostility that hurt Jordan’s film. Same goes for Neil McDonagh, his brother and the director of the equally dark In Bruges and Seven Psychopaths. These two work with zero sympathy, which could scare off customers.

For our money, the strongest candidate for a film like this would be Lenny Abrahamson, who made a splash last year with his surreal, tragicomic, altogether impressive Frank. It told the story of a lost spirit navigating himself, escaping from a harsh existence, and nailed both its tragedy and comedy. That movie also feels like the crazy, mixed-up kin to The Butcher Boy, and the noticeable new Irish filmmaker might be well-suited to take a stab at McCabe’s twitchy, twisty tale.

Who Else Should Work on This?

So many of The Butcher Boy’s problems in the 1997 version didn’t come from the talent so much as their difficulty grasping the tone. Get a novelist/screenwriter in there to balance the script out. A good move might be getting a polish from gifted author and screenwriter Nick Hornby. You know him from Fever Pitch and High Fidelity, but have you seen his scripts? An Education and Wild showed his ability to tackle tricky literary material.

His script for Lynn Barber’s memoir, An Education, was death-defying in that it swept viewers off their feet in spite of its age-difficult romance; a teenage girl falls in love with a much older man, and yet it doesn’t feel icky because of the way Hornby writes them. He was able to pull the lid off the relationship without distancing viewers and made it work in many ways. Maybe he could tackle the tragicomic life of poor Francie Brady and make a hell of a script out of it.