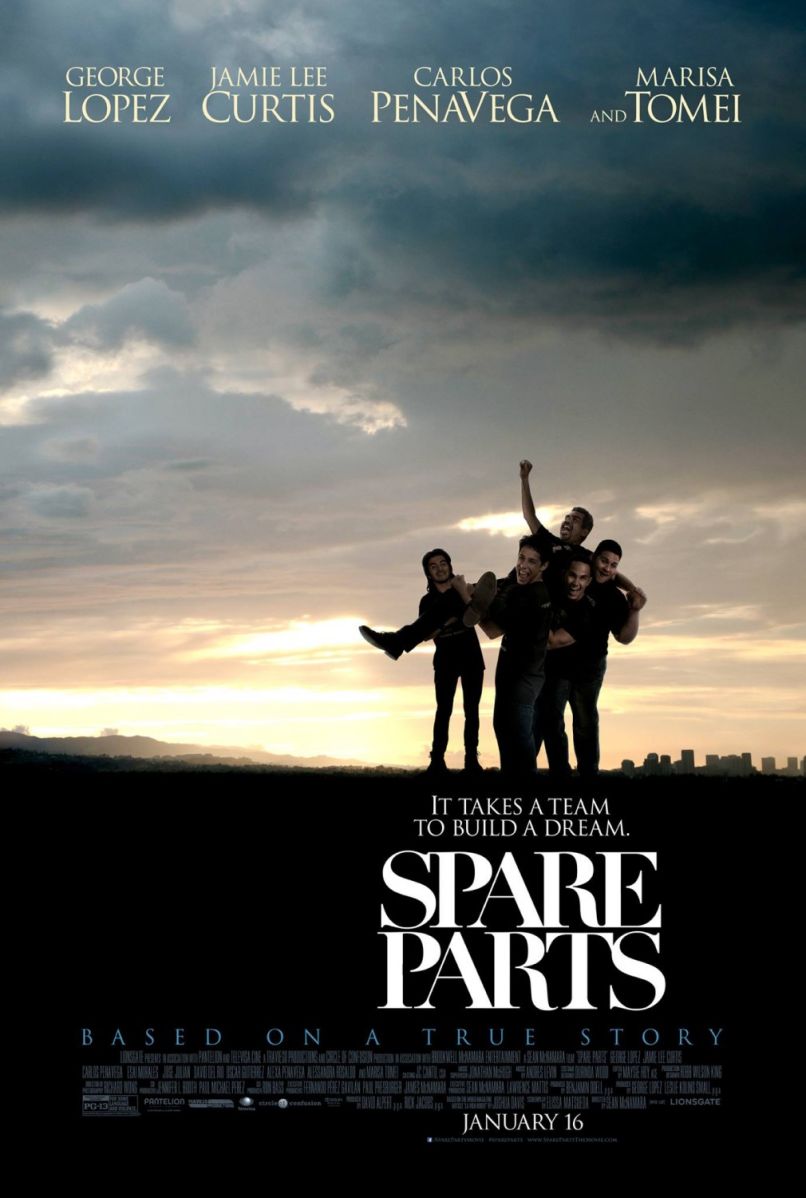 Spare Parts tells the true story of four undocumented immigrant teenagers that built a remote-controlled submarine, entering their creation in an underwater robotics competition against engineering colleges. On paper (and in marketing), the film hopes to come across as yet another Rocky-like venture about unrecognized talent and the mechanics of dreams. No one expects anything from this quartet of Mexican misfits, so naturally they’ll show ‘em all. There’s a big final competition, the group struggles to unite, cultural underdog themes, yadda yadda yadda. It’s not cynical to point these things out when it’s all so cliché, which is all the more flummoxing because this actually happened. Generally, this is the kind of movie called “uplifting” or “scrappy” or “from Walt Disney comes a true story of hope and inspiration.” The parts are more interesting than the whole constructed product.

George Lopez is Fredi Cameron (a mix of two real guys), a former engineer with a secret past, and a substitute teacher at Carl Hayden Community High School in Phoenix, Arizona. He comes to oversee a robotics club that grabs the attention of some plucky and anxious young guys. Oscar (Carlos PenaVega) yearns to serve in the military, but can’t without a proper American birth certificate. He came over as a small kid, served in the ROTC, and worked tirelessly to avoid deportation by US Immigration and Customs Enforcement. Undeterred, Oscar sees the potential in an underwater robot team. It could give him the edge he needs to enlist. Oscar seeks Cameron’s counsel and expertise, and together they assemble a brain (David Del Rio), a gearhead (José Julián), and a meathead (Oscar J. Gutierrez) to make a submersible on a shoestring budget and compete in a big league challenge with the likes of MIT and Virginia Tech. Nobody believes in these kids, they barely have homes or families, and they’re often at odds with each other.

Lopez makes for a decent enough lead, a reluctantly sympathetic and smart man. Jamie Lee Curtis and Marisa Tomei show up unexpectedly in thankless small parts as a sassy principal and a brainy science teacher, respectively. The four young actors that play the team members are committed despite their one-note characterizations. They all have charisma, and their struggles are relatable. (While Spare Parts may want to be representative of the Latino community at its center, the poverty and familial issues feel less like depictions and more often like beats — a shame given the opportunity.)

Spare Parts is a serviceable, curious, and ultimately bland true story adaptation. Like the mini-sub the four boys make, it barely functions, sputtering all the way. You’ll notice how so much ground is covered, and the film barely breathes or settles on any concrete ideas or themes. Spare Parts plays with cable-grade inspirational dramatics with such kneejerk familiarity that one can’t help but let their mind wander to other, more interesting considerations:

Like how Spare Parts enters the ring to advocate for immigration.

Like how Spare Parts is based on a Wired story and openly admits to creative liberties in the final where-are-they-now spiel; perhaps making Lopez represent two guys occurred for the sake of economy of storytelling, but it immediately destroys any prior bids at authenticity.

Like how McDonalds may have given money to the producers, because it’s forcefully featured.

Like how, at its best and safest, Spare Parts is a pro-STEM (Science, Technology, Engineering, and Math) education feature that will likely be embraced by science class substitute teachers just looking for a distraction.