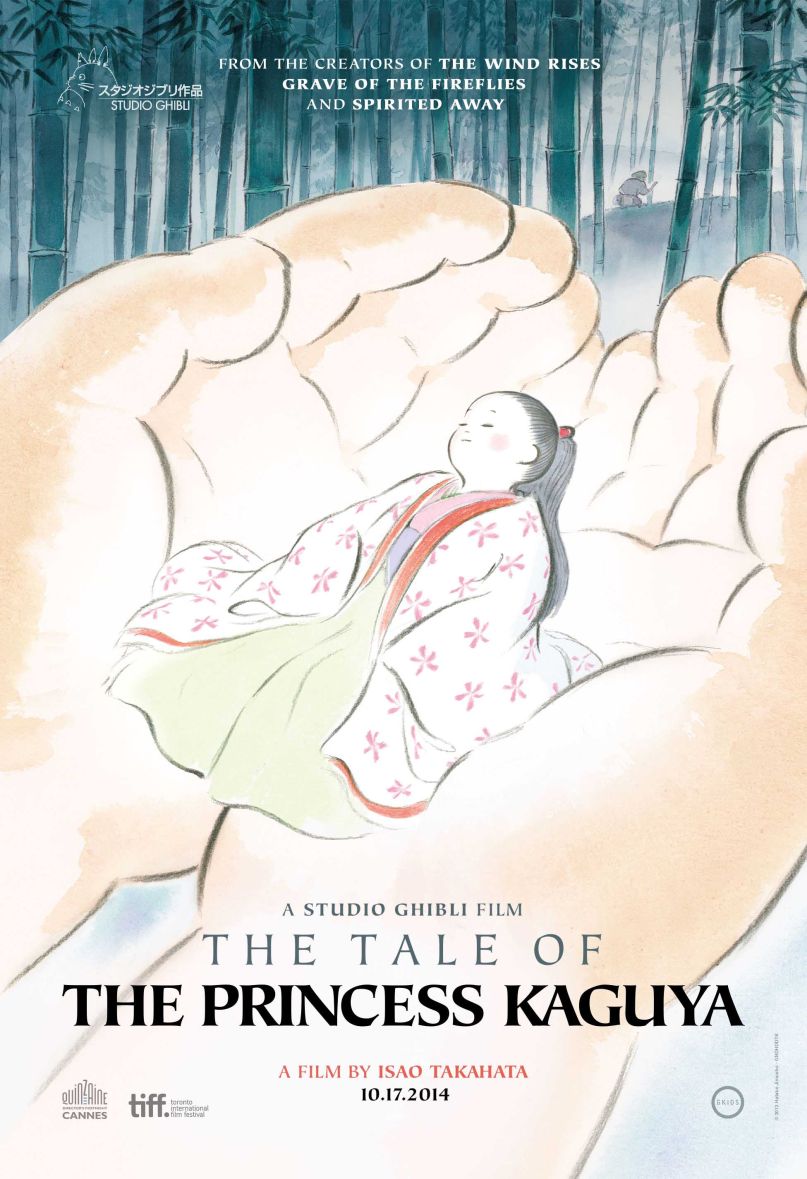 Both joyous and melancholy, Isao Takahota’s The Tale of Princess Kaguya is an exquisitely drawn fable. We witness the magical life and experiences of the sweet Kaguya as she’s born out of a bamboo shoot, emerges into royalty, and experiences all the pains and splendors of being a young woman on Earth. Expanded from The Tale of the Bamboo Cutter, a 10th century folktale from Japan, Kaguya is arriving somewhat desperately with a small arthouse run in the U.S. (today in Chicago, later this month as a MOMA screening, and sporadic showings throughout this past year), but it’s among the year’s finest works of animation, a halcyon antidote to trendy Hollywood freak-outs and franchises in animation. Find it. Somehow. And immerse yourself in Kaguya’s story.

Okina, a bamboo cutter, chops a stalk in the woods, only to find a small and magisterial blossom inside. The blossom’s housing a tiny woman in robes, sleeping. Nervously, he takes this little person that fits in the palm of his hand and gingerly presents the strange finding to his wife. Without warning, the small woman changes into a baby girl. The baby into a small toddler. The toddler then suddenly turns into an attractive and charming young woman. She develops nearly a lifetime in what seems like mere days.

Kaguya rushes through the experiences of childhood life, losing innocence and experience. In addition to Kaguya’s “birth,” great wealth came from Kaguya’s bamboo shoot as well, in the form of fine cloth and gold. Kaguya immediately stumbles into royalty and is declared a princess. Soon after, suitors, charlatans, hucksters, and all-around selfish people prey on her as she tries to hold fast to her ideals. Kaguya sees tradition and status as distractions. When she’s prepped to be a classical geisha-like figure, Kaguya panics and falls into despair, asserting that life is about laughter and sadness, not jewel-encrusted tree branches or prim and proper body movements. Still, Kaguya, sad about her trajectory, manages to laugh and smile, and it’s a lovely, contagious laugh. Kaguya’s capacity for happiness is untouchable.

What starts as a miraculous birth expediently becomes a lamentable realization. Kaguya’s life is too short and too divine for this selfish world of ours. Once you realize what she’s up against, what’s coming quickly, you see how unfair it is to be Kaguya. She’s a free spirit and a wonderful young beam of light. Not to wax daily affirmation, but Princess Kaguya makes one appreciate life’s simpler pleasures and eventually breaks the heart when you realize how much time is wasted on worrying about personal presentation.

Princess Kaguya comes from Isao Takahata of Grave of the Fireflies, another sad story with bittersweet sensitivity. Its patience is key. Although the middle act struggles to maintain audiences’ attention, the opening is wonderful, even magical, and the ending, well, you’ll feel it. Kaguya and her tale – thanks in no small part to voice actress Aki Asakura – make for a sort of spiritual advisor.

Seemingly rooted in very specific Japanese aesthetics (etagami painting, sad ironies in taste and beauty, webi-sabi, a mindful approach to the beauties of life), Princess Kaguya is a genuine vision. It presents clean, precise lines with soft colors in genuine, minimalist fashion. The skies and backgrounds are mostly white, and every frame has a way of centrally focusing on the right face, character, emotion, or plot device. From the fragile coming of Kaguya, to her fluidly rushing through fields and homes, to the desperate or humble faces of every character, everything looks pointed and perfect. Kaguya’s simplicity of art suggests a happy tale, which it often is, but it also serves to point out the deceits we put on in presenting our best veneers to impress others. In that way, Kaguya’s animation becomes meaningful, not just pretty.

A quick final note: this was screened with subtitles, with the original Japanese cast. Everyone sounds pretty perfect in their roles. However, apparently there’s an American cut, including reads from Chloe Grace Moretz, James Caan, Mary Steenburgen, James Marsden, John Cho, and many more name actors. In general, it’s assumed a film like this sounds best in its native language, but one can’t help but be curious with that cast. Perhaps a re-viewing is in order, but who knows where or when it’ll be in theaters?