Band of the Year: The War on Drugs

It's hard to imagine things getting much better for the Philly rockers. 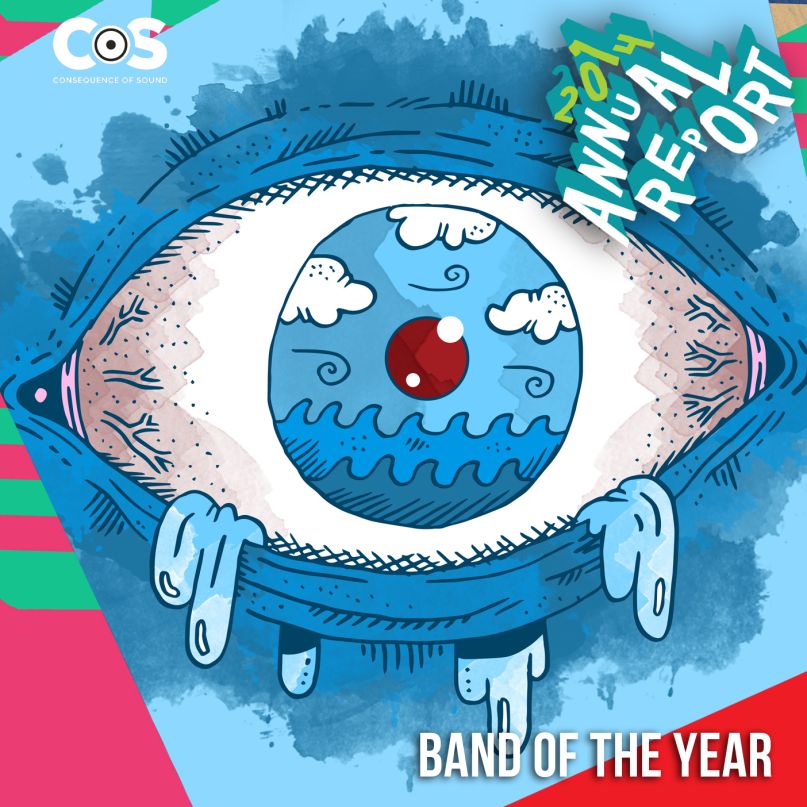 I saw The War on Drugs, the retro-leaning but increasingly expansive Philly rockers who have been an ongoing concern for nearly a decade, for the first time at Lollapalooza in August 2012. It was the very first show I saw at the fest, and it certainly added to my enjoyment that this was my first Lolla, first out-of-state festival in general: I was psyched to be there. But, surely, part of it had to do with the increasingly apparent notion that the band, led by singer, guitarist, songwriter, and longhair Adam Granduciel, are among America’s finest rock acts. At the time, they were on the heels of 2011’s glistening Slave Ambient, their second album and follow-up to 2008’s sparser Wagonwheel Blues, and you could just tell they were on the rise, with Granduciel’s harmonica piercing the hot air, as if screaming to everyone at Chicago’s Grant Park, “You should be watching these guys.”

“Oh really!?” asks Granduciel, getting ready to leave L.A. to play a show at Portland’s Crystal Ballroom two days later, when I tell him over the phone that The War on Drugs’ set remained my favorite of the entire fest. He knows I’m not just kissing ass, and he sounds genuinely delighted; however, the 35-year-old must know that no workmanlike indie rock band could get by with a lackluster live show. Theirs is professional, committed: six men (up from four) deriving from classic rock greats but building a hypnotic sound that’s all theirs. Whether it’s in the form of road-dogging or creation in the midst of less-than-ideal personal circumstances, that commitment is ultimately why The War on Drugs – Granduciel, David Hartley, Robbie Bennett, and Charlie Hall, plus new guitarist Anthony LaMarca and saxophonist Jon Natchez – are Consequence of Sound’s Band of the Year in 2014, following Arcade Fire in 2013, Death Grips in 2012, and Foo Fighters in 2011.

Starting with Wagonwheel Blues in 2008, The War on Drugs’ full-length albums have come out every two and a half to three years, but music-making hardly stops for Granduciel, born Adam Granofsky. Contrary to the widely held belief that he’s vinyl-obsessed, he tells me he’d rather buy gear than records. In order to “essentially mirror” the home recording setup of his friend Jeff Zeigler, who’s produced and/or engineered recent albums by A Sunny Day in Glasgow, Kurt Vile, and Purling Hiss, he’s currently building toward his ultimate home recording space, including a 32-channel Pro Tools interface and 16-channel tape machine. When he’s on the road, he wants to buy every beautiful guitar he can afford, not to mention the ones he can’t. During our half-hour conversation, he is never as excited as when he’s envisioning the setup, how conveniently he’ll be able to move musical ideas from his head to his hard drive and back and forth between him and Zeigler.

The thing is, though: It’s hard to imagine things getting much better for The War on Drugs on the musical level, because following Slave Ambient, already an excellent record with standouts like woozy opener “Best Night”, the spiraling “Come to the City” (in which Granduciel sings the definitive War on Drugs line: “I’ve been raaammblin’”), and the more compact “Baby Missiles”, they managed to make an even better album, this year’s Lost in the Dream. Seriously: a superior fourth album would cement Granduciel as a modern-day Springsteen.

Not to put a damper on Granduciel’s dreams for the future or anything, but Lost in the Dream is about as good as it gets. It’s almost a fact that it’s better than Slave Ambient (or anything else the band has done), as it’s their most popular record but still in the same vein as their existing output. “Red Eyes”, the lead single, was the first indicator of the band’s impending breakout, with its cathartic, darting guitar work and prominent emotional core. When the album was revealed in full in March, it turned out be their longest to date, with five songs longer than Slave Ambient’s “Your Love Is Calling My Name” at 6:01. With The War on Drugs’ music often being called road rock, those seven- and eight-minute songs (“An Ocean in Between the Waves” the best among them) are the true getaways, seemingly miles of soundscapes with Granduciel’s songwriting principles still intact. Even the self-explanatory “The Haunting Idle”, the sonic equivalent of the heaviest reality check you can imagine, is their hardest-hitting instrumental track to date in part because of its placement on the album, right after the downright pretty closing stretch of “Eyes to the Wind”. Just as former War on Drugs guitarist Kurt Vile has distinguished his solo work from The War on Drugs, Granduciel and co. have strengthened their initially plainer sound into something identifiably theirs.

After telling me he’s been on a Big Star kick lately, I ask Granduciel, knowing he’s a Bob Dylan fan, if he’s checked out the new Basement Tapes box set. He hasn’t, not really, though he wanted to buy it for his and actress/girlfriend Krysten Ritter’s recent vacation to Mexico (what with the song called “Goin’ to Acapulco” and all). This leads to a discussion of whether or not there’s much unreleased War on Drugs material that could be made available to fans at some point. He says that “there’s a lot of stuff,” but that anything that hasn’t already been released isn’t finished. “I tend to start working a batch of songs, and then get really into those songs,” he says of his quality-over-quantity creative process. “I’m not the kind of guy that writes 30 songs for a record and whittles it down. I work on 12 or 13 and only leave two off.”

He continues: “[For] any songwriter, what’s known as ‘current work’ has usually been digested for years and years.” Lost in the Dream, though, has come to be partly defined by the personal turbulence it sprang from. Last year, Granduciel endured a period of deadening anxiety unlike anything he’d experienced in his first three decades and change. “2013: There’s a lot of things in flux, things I hadn’t worked out,” he says. He’s somewhat evasive here, but lucky for us, the introspection of Lost in the Dream is more upfront – not quite Nebraska-levels of honesty and closeness, but almost, with lyrics like “I’m just a burning man trying to keep the ship from turning over again.”

With more emotional lyrics came more fans – a shift that’s been quite visible. “I think,” Granduciel says when I ask about the largest show the band has played in 2014, “the biggest might’ve been when we played the waterfront in Brooklyn, which was like 4,300 [people]. [It] was really special, just ’cause we’ve been playing in New York since like 2005.” He also cites their shows at The Fillmore in San Francisco and Minneapolis’ First Avenue – two apiece – as highlights of the year, not to mention their mere one-night stands at Stubb’s in Austin and the Troubador in Los Angeles.

“When we started rehearsing in January,” Granduciel says, “the record hadn’t even come out yet. The band was ready for the [bigger shows] because we’d already been performing as a six-piece. [The band members] had been dialing in their sounds and performances for a couple months.” Regular shows aside, the hard work was obvious to anyone who tuned into the Late Show with David Letterman on July 7th, when a Les Paul-strapped Granduciel and the rest of the band played an emphatic rendition of “Red Eyes”, two years after they took the less flashy “Come to the City” to the Ed Sullivan Theater.

With songs like “Red Eyes” exploding with its lead guitar curlicues, War on Drugs shows can get loud – and one fellow musician took issue with this in September. At the Ottawa Folk Festival, Mark Kozelek, better known as Sun Kil Moon, complained of The War on Drugs’ “beer-commercial lead-guitar shit” disrupting his simultaneous set nearby. Thus began the most notorious “beef” in indie rock this year, one that ultimately culminated in Kozelek releasing a seven-minute joke song called “War on Drugs: Suck My Cock”, in which he recounts the initial incident in Ottawa as well as this year’s Hopscotch Music Festival in Raleigh, where he referred to the audience as “fucking hillbillies.”

I don’t ask Granduciel about Kozelek because I’m not sure it’s important enough to bring up at 10 in the morning L.A. time; he already, in an interview with Songs for Whoever, called his new rival a “prick,” “such an asshole,” a “child,” and an “idiot,” most of these terms tumbling out of his mouth accompanied by a decisively detonated f-bomb. However, the fact that Granduciel, 35, and Kozelek, 47, were playing at the same time charges the situation with possible jealousy on the latter songwriter’s part. Kozelek has been in the public spotlight longer and presumably felt he should’ve had a set later in the day. Evidently, though, it all worked out for Kozelek: Here I am bringing up his name and album where, otherwise, he’d only be mentioned as a musical comparison, if that.

The laughable part of Kozelek’s “beer-commercial lead-guitar shit” comment, though, is that the description sounds a lot more exciting than his own conversational, narrative-driven folk. That’s not a jab at Benji, Kozelek’s own 2014 statement and his best-received album in a decade, maybe ever. Lord knows their fanbases overlap; certainly, dozens of attendees were torn over which set to see at the fest in Ottawa. But Granduciel’s initial ease about the situation endeared him to his audience, and the band have continued to thrive on their audacity, whether it’s the guitar solos or Granduciel’s emotional honesty.

Maybe rock and roll, and all the venues The War on Drugs have played this year, has been drained of its lore: There’s probably no equivalent of The Allman Brothers’ 23-minute performance of “Whipping Post” on the live album At Fillmore East (the one in New York), now a moment in rock history that dads fondly recall while “dad rock” bands like The War on Drugs keep trucking. But they play like it – or a similar myth-making feat – is within reach, and all indicators show that we can count on Granduciel to keep rambling onward. Will it be with longtime home Secretly Canadian, or have The War on Drugs been the subject of major-label interest in light of Lost in the Dream? “I can’t really talk about that,” Granduciel says, disappointingly but understandably. Considering the redemption that is Lost in the Dream and all of its related excitement, the more he still has to figure out, the better.