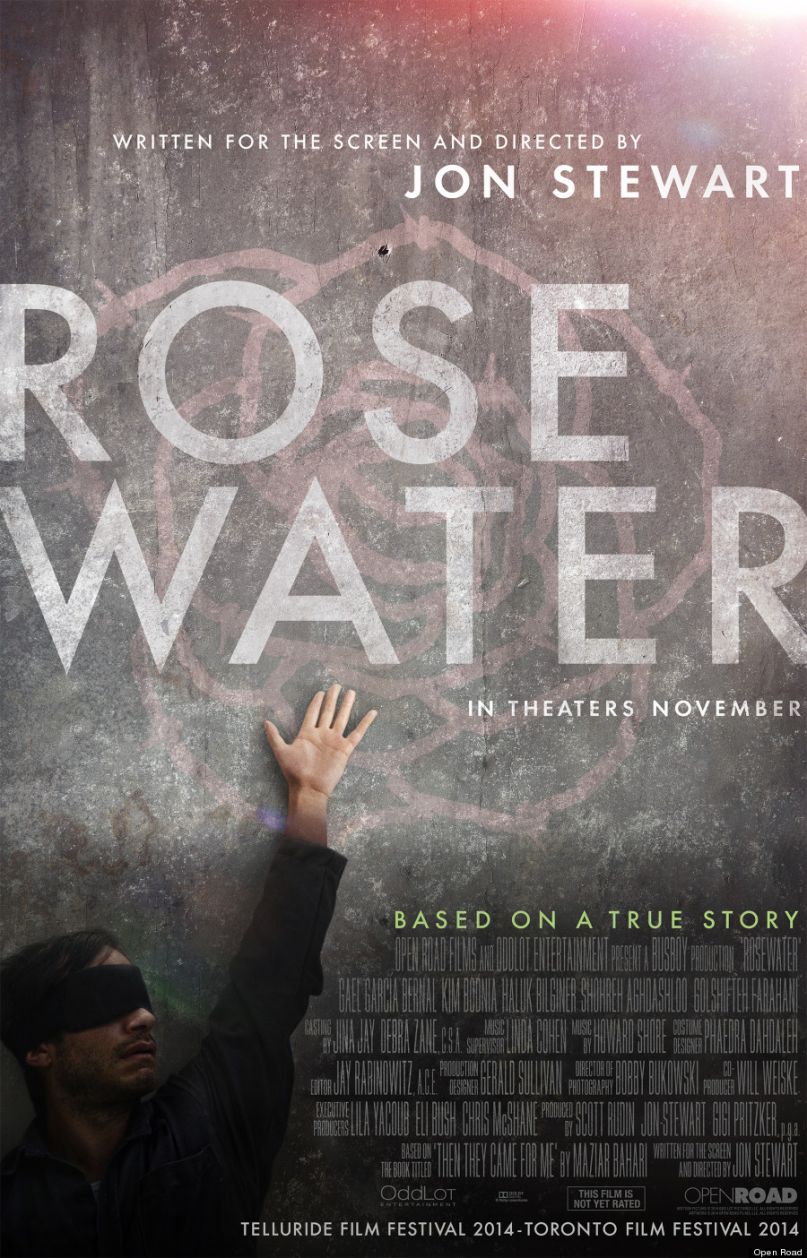 In 2009, when Maziar Bahari (Gael Garcia Bernal) was suddenly imprisoned in Iran under spurious accusations of spying and treason against Mahmoud Ahmadinejad’s regime, revolution was already brewing. It’s not that Bahari’s sins were even all that egregious in the grand scheme of things; during one particularly violent protest, in which Iranian troops were opening fire on the crowds, Bahari turned his camera on those same troops despite his knowing that there are certain situations in Iran you simply do not film. By Rosewater’s retelling, it was an ally of Bahari’s that spurred him on, with the angry reminder that “you hold a real weapon and you choose not to use it.” He did, and subsequently spent the next 118 days in almost fully solitary confinement for his troubles.

Bahari’s story is the spine of Rosewater, Jon Stewart’s directorial debut that he also adapted from Bahari’s book about his detainment, Then They Came for Me. It’s an assured debut, one that isn’t without flourish (Bahari sees the ghosts of his past life in Iran in literal detail, for instance projected on storefronts), but one that also comes from a deep and clear place of empathy, guilt, and power. After all, while Bahari was virtually condemned the second he turned his camera against the Iranian forces that were only marginally suffering Western journalists at the time to begin with, his appearance on The Daily Show probably didn’t help. Bahari showed up on Stewart’s program to be interviewed jokingly about whether he was a spy or terrorist. It’s therefore unsurprising when that same footage is used against him in interrogations later on.

The use of that footage is actually a notable key to the film’s unusual approach to its subject matter. It’s never made fully clear whether Bahari’s interrogators simply lacked an understanding of satire or simply used it as one more weapon in an ironically Orwellian campaign of doublespeak against the increasingly weathered Bahari. And it’s hardly the only tactic the largely repressive regime uses against him for purposes of intimidation and outright abuse. Rosewater begins as a film about a discontent Iran and the uprising caused by Ahmadinejad’s suspiciously emphatic re-election, but after a time it’s distinctly Bahari’s story, one that focuses intently on his time in captivity. It’s as much about what psychological abuse does to a man as it is about the cultural climate of the time.

If anywhere, that’s where Rosewater occasionally feels lacking. While it’s not necessarily Stewart’s responsibility to chronicle the entirety of a revolution, the events surrounding Bahari’s imprisonment (or, more frankly, abduction) are perhaps too intrinsically linked to his own story to be worked through as quickly as Stewart does here. He hastily introduces a revolution in its infancy, one being waged with the aids of satellite dishes and Twitter by the vibrant young, and then reduces the film’s scope to one cell in one prison. And while we’re on the subject, it’s barely even a cell. Bahari spent most of his days in a concrete slab, one triple his height on all sides that only allowed light during a spare few hours of the day and a smaller slab for a resting place; to call it a bed would be overly generous.

For a film so pensive and sad in premise, Stewart seems like an odd fit outside of his personal connection to the material. But he ends up proving an inspired one, for Rosewater is at its best when it’s less a pick-and-choose historical artifact than an examination of what time in undeserved solitude does to the human mind, one pitched perfectly between tragedy and dark comedy. It needs it, because the film necessitates an opposing force against Kim Bodnia’s powerful turn as the titular interrogator, one ironically nicknamed as such by Bahari because he “used to think only the most pious carried that scent.” He plays nice with Bahari, beats him, deprives him of sleep, tortures him with visions of his pregnant wife back in London, and does everything in his power to break Bahari down, not even so much out of any particular place of necessity or conviction, but because it’s his job. If he can’t do it, someone who can will replace him.

In return, Bernal gives a performance full of defiant life. He learns to laugh in the face of the gallows, communing with his deceased father and sister at various points, learning prison survival tactics from the former (collecting limestones in the prison yard to play chess, dancing whenever possible) and the spirit of revolution from the latter. At one point, he hilariously misdirects Rosewater with tales of illicit massages in parlors around the world, at another he meets him with the same kind of logical loops being used against him. There’s little that’s funny about Rosewater in premise, but in practice and largely thanks to Bernal’s benevolent, moving turn, there’s light in even the most hopeless corners of the planet.

While Rosewater turns its own camera away from some of the worst stuff (Bahari’s abuses are detailed more thoroughly in his book than they are in Stewart’s film), it’s in service of a film that aims more to uplift and inspire than to punish. After all, Bahari already lived enough of that. What Rosewater speaks for, really, is the contingent of people like Bahari still imprisoned, people that he acknowledges “did not have the benefit of international attention.” Bahari got to write about it on their behalf, and now Stewart has turned that writing into a film that at its best offers the same invocation. For there are other Maziars out there, others waiting for rescue from what Bahari endured or worse.