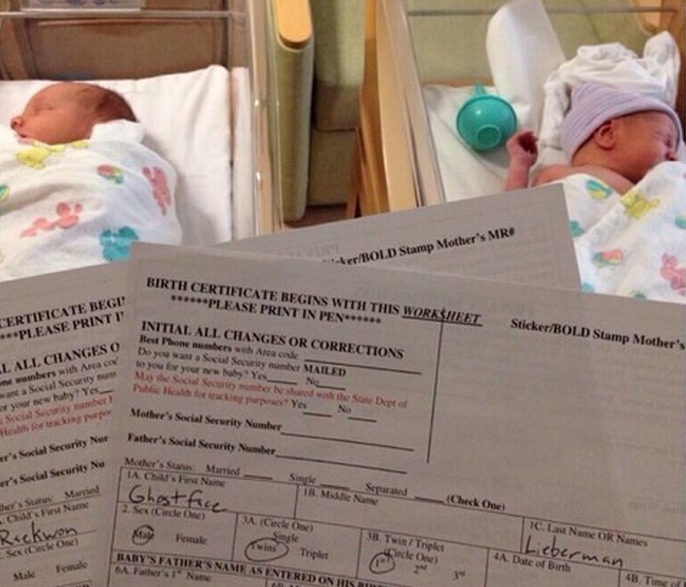 Update: As Gawker points out, the father of “Raekwon” and “Ghostface” has fessed up and revealed the whole thing is just a hoax.

My mom has been a neonatal nurse for nearly 40 years, and in that time, she has seen some very interesting names for babies. There was that one boy named, and I kid you not, “Shithead” (it was apparently pronounced “Shith-heed”). Then, there were twin girls named “Orangella” and “Lemongella”, as in “orange and lemon Jell-O”. Yet somehow she still named me the painfully pedestrian “Christopher Brian Coplan”.

Now, there’s two babies who will one day walk around with the monikers of two hip-hop titans: a couple has named their twin boys Raekwon and Ghostface Lieberman. The actual Raekwon unveiled the joyful news via Instagram (below), adding “This is live! #wu4thebabies”. No word yet why the parents, who I hope live in or around Staten Island, decided not to go with Dirt McGirt instead. Also, are the boys’ middle names “Lex Diamonds” and “Tony Starks”?

We here at CoS would like to officially welcome the brothers into the world. Adolescence will either be truly amazing or totally embarrassing. Just might depend on how good Wu-Tang Clan’s A Better Tomorrow actually is.