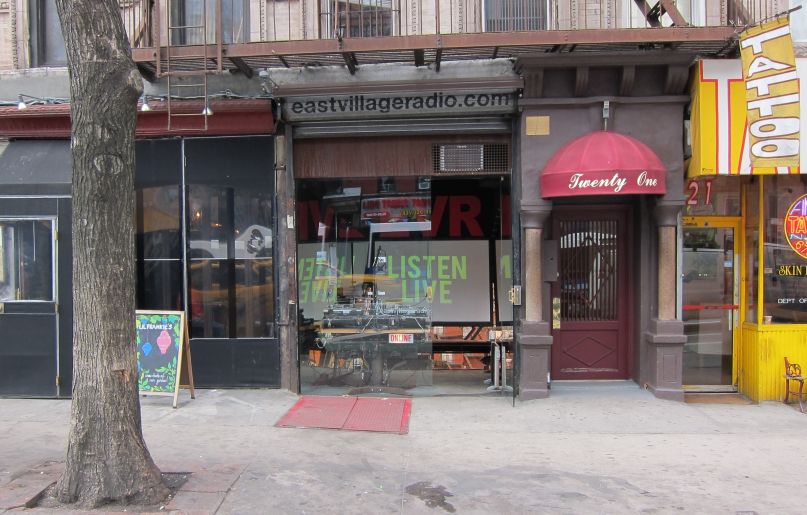 After 11 years of operation, Internet radio station East Village Radio will be shutting down. The last broadcast will air next week on Friday, May 23rd.

East Village Radio, which was first founded in 2003 and briefly aired over 88.1 FM before moving entirely online, has not only been a mainstay of underground music for the Internet crowd, but something of an institution in the East Village neighborhood of New York City. Over 60 DJs, purveyors of everything from hip-hop and indie rock, to jazz and house, broadcast more than 15 hours of daily programming from a tiny storefront studio on First Avenue. In the past, Mark Ronson and The Smiths’ Mike Joyce have served as DJs; meanwhile, artists like Lou Reed, Sonic Youth, Drake, and Cold Cave have been known to drop by for interviews and appearances.

According to EV Grieve, while popularity is not an issue for the station, drawing in about 1 million listeners each month worldwide, the laws governing Internet radio have worked against EVR. Under the Congressional Digital Music Copyright Act of 1998, Internet broadcasters must pay a royalty fee for every listener. This is contrast to traditional radio stations, who actually pay a flat rate (i.e. they pay less, even as the audience grows).

“Every time we get a new listener, it costs us more money with licensing fees and Internet costs,” East Village Radio CEO Frank Prisinzano told EV Grieve. “After doing some projections, we see that it is going to be very, very difficult for us to continue to break even. It’s very difficult for an independent medium music company to survive in a world where Apple is paying $3.2 billion for Beats by Dre.”

Peter Ferraro, EVR’s General Manager and head of programming added, “We pay a higher rate for royalties and licensing than Pandora pays. We live in a world where these behemouth [sic] music-streaming services keep going in for more capital. It’s almost like we are being penalized for our growth.”

Both Prisinzano and Ferraro have considered collecting extra funds from an outside benefactor, but ultimately decided against it, fearing it would compromise EVR’s vision and mission.

Ferraro chimed in, “If another media or VC company came in, I don’t know if they would have understood the nuance of being local but global. There was a certain localness that we feel proud to be part of. But the mission has always been to amplify that out to the world, but to have it point back to the neighborhood.”