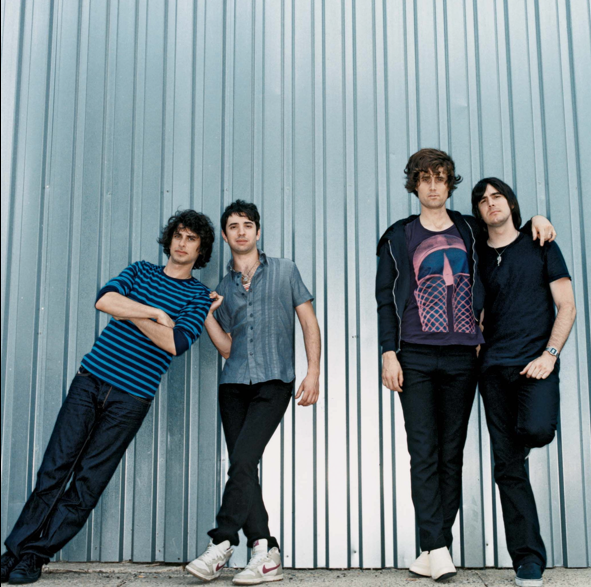 Because of Jenner, Roccoforte, and Andruzzi’s desires for extravagant luxury,
the dance-punk fans of the world have grown rich. – Revelation 18:3

The Rapture, the 15-year-old New York dance-punk band who recently broke up without bothering to inform the rest of us, won’t get a Shut Up and Play the Hits. That’s because there was no Madison Square Garden goodbye show to document like there was for LCD Soundsystem, whose James Murphy signed The Rapture to DFA Records in 2001. When an unglamorous group like this – Luke Jenner, vocals and guitar; Vito Roccoforte, drums; Gabriel Andruzzi, keyboards and saxophone; and, until 2009, Mattie Safer on bass – breaks up, the assumption is that they just don’t get along like they once did. Their final album, pending reunion, will go down as 2011’s In the Grace of Your Love, which was announced the day following the day that, according to California evangelist Harold Camping, was to mark the start of the real-deal biblical rapture, trumpets and all.

“Extravagant luxury” exaggerates what The Rapture did, maybe, but it gets at the sax-blowing ambition that would guide them through their career. People didn’t always dance at Rapture shows, but that’s because they were busy gawking at Jenner tapping circuital licks on his Telecaster, the guitar’s neck pitched at a 45 degree angle, perfectly bisecting the stage and the heavens. Roccoforte, Andruzzi, and, when he was around, Safer all inspired that same reverence in their own ways.

The musical futures of Jenner, Roccoforte, and Andruzzi are largely TBD. Jenner, who turns 40 next year, has everything he needs for something like a Dean Wareham-caliber solo career. Andruzzi has done good work producing smaller acts, and his studio acumen and sax skills will serve him well if he ever tries to make a Colin Stetson-style record on his own. Roccoforte has few credits outside his tenure with the band, but maybe he’ll try rap production and capture the attention of MCs who just like the fact that he shares his first name with the Godfather. Let’s wish them all well and hope that, at least for a little while, fans will refrain from asking about a possible reunion when they bump into these normal, exceedingly talented dudes on the street.