Live Review: The Pizza Underground at San Francisco’s Neck of the Woods (3/5) 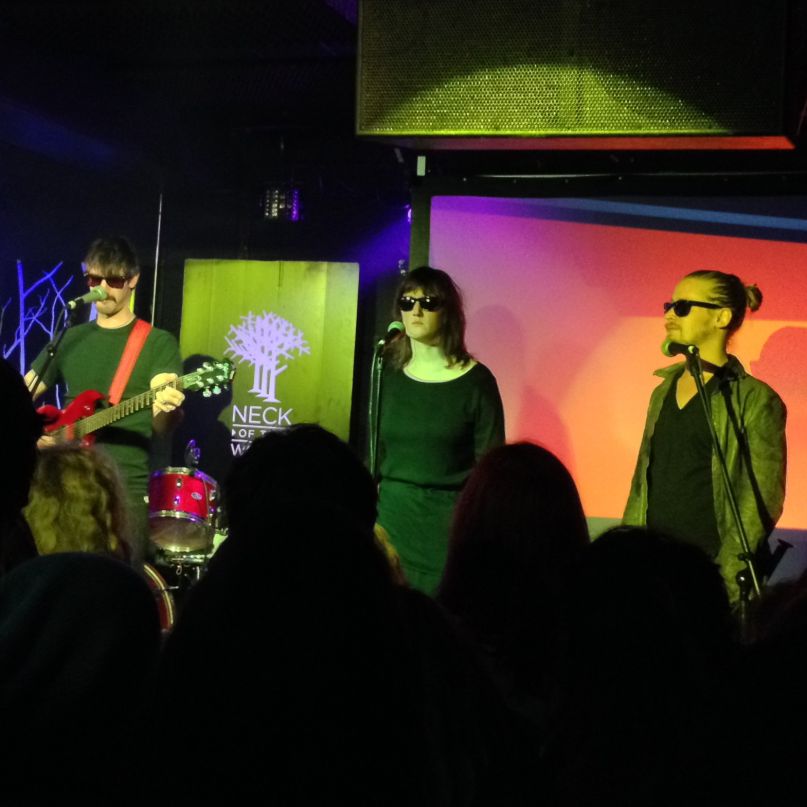 What can I tell you that you don’t already know? Macaulay Culkin, known to ’90s youth as perennially forgotten bandit-buster Kevin McAllister in the Home Alone franchise, has a Velvet Underground cover band that changes all the lyrics to be about pizza. As the first stop on their Fresh to Your Door tour, The Pizza Underground played the Neck of the Woods in San Francisco, a tiny venue for mostly local bands. The quintet was pulling double-duty, playing a 6:00 p.m. “happy hour” show ahead of their original 9:00 p.m. show to appease the multitude of pie/My Girl fans desperate to see one of the better gimmicks in the last decade.

Sandwiched in a mass of twentysomethings fresh from the office, all trying to get drunk as quickly as possible, the atmosphere radiated the kind of buzz you might expect from a big band performing a secret show or slumming it for fans in an intimate venue. Local pizzeria Escape From New York Pizza was on-hand to give out free slices to patrons, and both the upstairs and downstairs bars were packed. Were we fans of Lou Reed, diehard deep dish enthusiasts, or simply unable to pass up the chance to say “yes, I was there”? I honestly didn’t know. Opening act Toby Goodshank (of Moldy Peaches fame) did his best to serenade an impatient crowd with brash acoustic ballads. He left to gracious applause, and then finally, it was time to eat.

The five members of the band took the stage, all in dark shades and black clothes. The instruments consisted solely of a guitar, a glockenspiel, and a pizza box which served as the group’s percussion. Culkin was positioned far right, and spent the night offering harmonies and one very epic kazoo solo on closer “Take a Bite of the Wild Slice”. They opened with “Papa John Says”, a play on “Stephanie Says” that featured some deliciously silly lyrics and not much in the way of musical aptitude. These traits would be consist across the Pizza Underground’s 30-minute set, energy and goofiness supplementing a lack of musical mastership.

I think it’s fair to say that no one was expecting a polished aural product, and the chance to hear Velvet Underground tunes live, albeit in a rather screwy context, was worth the entry alone. Hearing Phoebe Kreutz deliver a not-half-bad Nico impression during “Cheese Days” was surreal, conjuring simultaneous images of Margot Tenenbaum departing the Green Line Bus and the glory of a pizza slice fresh from the box. When Kreutz sang “I don’t do too much toppings, cheese days,” I legitimately had to stifle a laugh. Though I assume most of the audience hadn’t heard the Pizza Underground’s debut EP, they had no problem singing along to refrains like “it’s such a pizza day” and “here she comes, better hide your slice.”

Two-thirds of the way through their set, the band gave the stage to a reincarnation of Kurt Cobain (announced as Kurt Cobain’d) performing “Nevermound”, which we would soon learn consisted of a Nirvana medley with all the lyrics changed to the past tense. Toby Goodshank was the Cobain impersonator, burning through acoustic renditions of “Smelled Like Teen Spirit”, “Came As Your Were”, and more. Goodshank even dressed the part, sporting a wig and a Seattle grunge appropriate sweater. Just when it seemed the night couldn’t possibly get any more bizzare, the main act reclaimed the stage and closed with the aforementioned “Take a Bite of the Wild Slice”. I’ve seen many things, and now Macaulay Culkin raging a kazoo solo to a sold-out crowd at 7:45 p.m. in a bar two blocks from my apartment is one of them.

I can’t tell you to see the Pizza Underground, but I can’t recommend missing them either. But I can say, without question, “yes, I was there.”