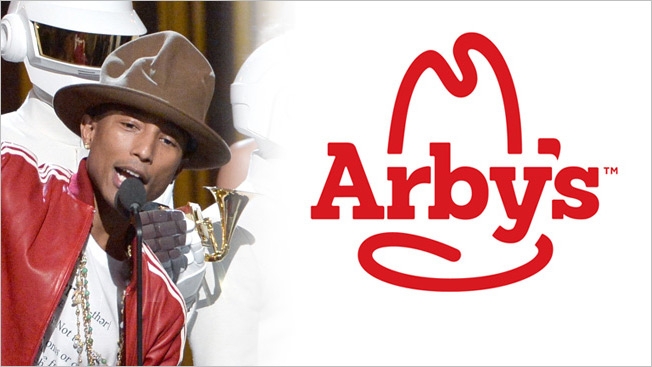 Pharrell’s Vivienne Westwood-designed Buffalo hat proved the second most talked-about piece of head gear during the 2014 Grammy Awards. It spawned its own meme and for all intents and purposes, proved to be a bigger promotional vehicle than any of the guest stars appearing on Pharrell’s new solo album, G I R L.

Recently, good guy Pharrell put the hat up for charity in order to raise money for his educational non-profit From One Hand to Another, and the winning bid came from unexpected but appropriate source: Arby’s, whose logo looks a lot like the hat they now possess.

Prior to last night’s Oscars, where Pharrell performed with a new hat, the chain restaurant revealed that they were behind winning bid of $44,100.

.@Pharrell You're welcome. We're HAPPY to support a great cause & get our hat back. Good luck at the #Oscars tonight! pic.twitter.com/2oA7qDPX9z

Pharrell, if you decide to put last night’s track suit up for auction, I hear Bruce Jenner is interested.