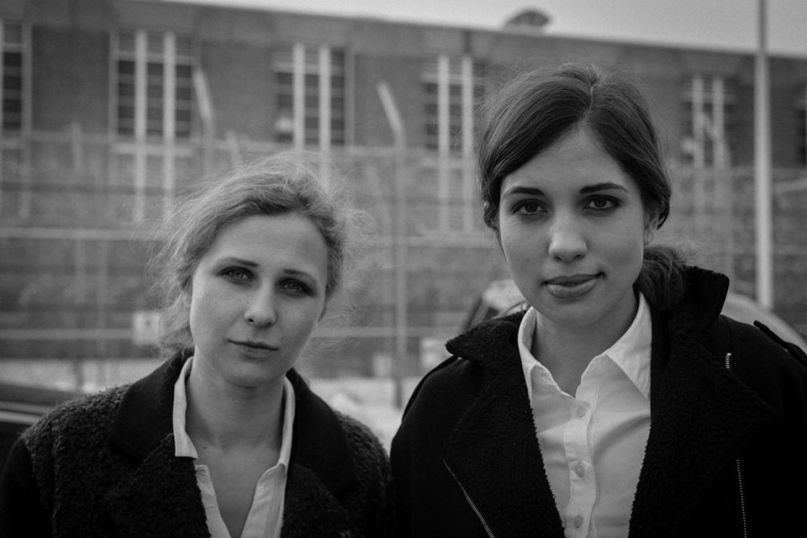 Photo by The Voice Project

Pussy Riot members Nadya Tolokonnikova and Masha Alekhina have been detained by Russian police in Sochi. Police held the women for seven hours on Sunday and 10 hours on Monday, questioning them over an alleged theft at their hotel room.

Update: According to The Associated Press, Tolokonnikova and Alekhina have been released from police custody. No charges were filed. However, according to Tolokonnikova’s husband, Petr Verzilov, the women “were put to the floor and beaten and physical force was used to them when they refused to be questioned without the presence of their lawyer, who was on his way to the police department.”

Tolokonnikova and Alekhina were in Sochi to perform a protest song called “Putin Will Teach You to Love Their Homeland,” according to NPR. Their goal was to call attention to the “corrupt” Olympics, inhumane prison conditions, and authorities’ attempt to “suppress freedoms.”

In an interview with The Wall Street Journal, Tolokonnikova explained:

“We, Maria Alyokhina and the anonymous members of Pussy Riot, came to Sochi to organize a protest and express our political views but at the time of our detention [by the local police] we were just taking a stroll minding our own business when we got picked up by the police and shoved into a police van. We’ve been detained like anybody who’s made an attempt to criticize authorities during the Olympics. Authorities treat local guests and athletes nicely but not those who are attempting to organize a protest.”

Tolokonnikova and Alekhina served two years in Russian prison after being found guilty of “hooliganism motivated by religious hatred or hostility” stemming from a protest against President Vladimir Putin in August 2011. Their story gained worldwide attention and upon their release in December 2013, they embarked on a worldwide media blitz to denounce Putin and the harsh living conditions in Russian prison. During an appearance on The Colbert Report last month, the women called their release from prison a “publicity stunt” ahead of the Olympic Games and said they were not afraid of further imprisonment.  “We don’t think it was a successful stunt; we don’t think it improved the image of Russian. Maybe Putin made a mistake and should throw us back in jail.”